Special Report: Read This Before You Buy Beyond Meat (BYND) Stock

In May 2019, an IPO rocked the investment world. It wasn’t some new cannabis company, but the buzz around its initial foray into the public markets was just as big.

But the unfounded exuberance in the stock and the underlying company faded as earnings were released and hope was confronted with reality.

Since that fateful day in July when shares hit their peak, the stock price slid as far down as $58 by March 2020. They’re still up more than 100% over their initial offer price, but they fell over 75% since hitting that peak in July 2019. And everyone who bought in the secondary market at all was looking at a loss. 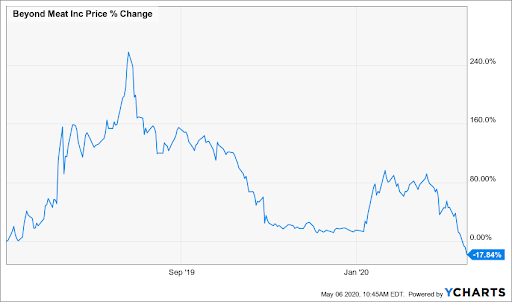 In case you didn’t figure it out from the title of this report, I’m talking about Beyond Meat (NASDAQ: BYND). And if you think that drop from over $200 to under $60 was a great buying opportunity, you need to finish reading this report…

Beyond Meat the Lab

First, let’s talk about nutrition since part of the buzz around the company’s products was that they were a healthy alternative to real meat.

Beyond Meat’s main protein source is pea protein isolate. It can be derived from an actual pea, but that’s a slow and expensive process. And it requires more peas than the world currently produces.

So, you can bet your pea protein isolate is made in a lab in order to mass-produce it. It’s goo to start. Then through what the company calls a process of “heating, cooling, and pressure” the "goo" starts to look more like meat.

Don’t take my word for it, though, even John Mackey, CEO of Whole Foods (where every Beyond Meat product has been debuted, says that, “if you look at the ingredients, they are super, highly processed foods.” He goes on to point out that he doesn’t think eating processed foods can count as “healthy.”

“I think people thrive on eating whole foods,” Mackey says. “As for health, I will not endorse that, now, don’t get me wrong here. I’m not comparing it to candy or anything like that. But it’s not a salad. It’s a highly processed goo created in a lab. And it’s not something you can eat every day if you’re trying to lead a healthy lifestyle."

Now, let’s talk about a little company secret they’ve tried to sweep under the rug since before announcing plans to go public.

Right before starting its roadshow to pump up its IPO, Beyond Meat not-so-kindly requested that its biggest financial backer walk away from the company.

Management just didn’t think it would look good if the public knew where Beyond Meat started and who stood to benefit the most from its IPO.

The reason they felt that way is that Beyond Meat’s biggest backer, and the reason it was able to grow big enough to go public at all, was none other than Tyson Foods (NYSE: TSN), the second-largest processor and marketer of beef, chicken, and pork in the world.

Now that’s a thing that should make you say, “hmm,” if ever there was one. First, it lets you know just how loyal the management at Beyond Meat is to their shareholders and supporters.

They kicked Tyson to the curb after the company had basically nurtured Beyond Meat like a mother.

And second, it lets you know that this was never supposed to be a substitute for meat or a healthy alternative to animal protein. It was nothing more than another product to take up shelf space. It was just something to sell.

Beyond Meat Year One

As the world continues to learn how to deal with coronavirus and supply lines for other producers continue to be a mess, Beyond Meat has seen some increased interest in its stock.

Animals and the meat products we get from them are difficult to transport and store. But goo is easy to process, easy to make, and easy to store. So, it would make sense that plant-based meat substitutes would see some sales they wouldn’t normally have.

But that doesn’t mean you should be out there betting on Beyond Meat to rule this corner of the comestibles’ world forever.

And a good reason to believe that BYND won’t be able to compete in the future is its main backer in the good old days before it went public –– Tyson Foods.

Tyson already led the funding to create Beyond Meat. And it had been working on its own lines of meat substitutes already. So, investing in Beyond Meat was really just buying some extra R&D.

But when it got kicked out before the IPO, Tyson didn’t just sit back and lick those wounds. It pushed forward with its own meat alternatives.

And you can bet that after watching its animal processing plants shuttered as COVID-19 spread across the country, it’s putting even more priority on getting those lines operational and on store shelves.

That means, in the not too distant future, Beyond Meat, a relatively small company, will have to battle with the second-biggest processor and seller of meats in the entire world.

Tyson has more cash, more credit, more connections, more infrastructure, and just more clout. And while it’s not likely to drive Beyond Meat completely out of business, it’s going to put a very heavy cap on the smaller company’s potential growth.

Beyond Meat’s stock was a darling for a while. And it probably made some speculators lots of money in its initial rally to $239. But anyone who got caught up in the hype is likely sitting on a big old loss.

The plant-based protein industry is here to stay and will likely grow as an alternative for those who can’t access the real thing. But Beyond Meat is a very small fish in an immense ocean of bigger companies.

And one of the biggest not only helped found Beyond Meat but also has years of its own R&D behind plant-based protein products. So, if you’re looking for a way to profit from the craze Beyond Meat and its private sister, Impossible Foods started, you’re better off looking at other companies.

And here at Wealth Daily, we think Tyson is the company to bet on here. It’s got the cash. It’s got the R&D chops from decades of experience. It’s got the credit facilities to grow at a rapid clip. And it’s got some really good motivation to knock Beyond Meat’s management down a peg or two.

The Wealth Daily Bottom Line: Tyson Foods (NYSE: TSN) common stock is the best way to bet on the plant-based meat alternative market. Investors should stay away from Beyond Meat (NASDAQ: BYND).