Throughout the 1980s, Domino’s Pizza (NYSE: DPZ) had a sure-fire marketing gimmick to entice customers, a promise to deliver a pizza in 30 minutes or less.

In 2008, the pizza chain was the first national chain to introduce an online order tracking.

Now the pizza giant is hoping to transform the pizza delivery game once again.

Domino’s has launched a pilot program in Whangaparaoa, New Zealand to deliver pizza via drone.Traveling at 18mph, Domino’s goal is to deliver your pie in 10 minutes or less.

Domino’s already plans to expand the program to 7 other countries.

The coming drone-delivery revolution is promising far more than an aerial assault of pepperoni.

According to Grandview Research, the commercial drone market is expected to exceed $129 billion by 2025.

Regulators across the globe are moving to put regulations in place for this booming new industry.

According to the New York Times, 45 countries already have laws in place to allow delivery by drone.

Drone delivery has a number of advantages that should excite corporations and consumers alike. The obvious advantage is the increased speed at which customers would be able to acquire their goods. You’re more likely to buy more items more often if you can get them in a timely fashion.

There are also environmental benefits. As countries and corporations are increasingly worried about climate change, drones provide an opportunity to curb greenhouse gas emissions. Since nearly all drones are battery operated, they inherently have a lower carbon footprint than other modes of transport.

How did we get here?

Rewind just a few years back to 2005; It was the era of flip-phones and iPods.

If you were looking for a website that would be the future “everything store,” you’d probably be looking at eBay. But then something changed.

Amazon needed to change the narrative that it was primarily a book and DVD purveyor.

In February of 2005, Jeff Bezos announced that for $79 a year, customers would be rewarded with what he called “all-you-can-eat two-day delivery” on their orders.

At that moment, Amazon fired the first shot in an escalating war of convenience in online shopping.It forever changed the types of products people were willing to buy online.

And it wasn’t just Amazon, consumers expected free or cheap two shipping from any online retailer. Amazon demonstrated that consumers didn’t just want fast shipping, they were absolutely addicted to it.

In a 2013 interview with 60 Minutes, Bezos revealed that Amazon was working on Prime Air, a done delivery service that promises deliveries in 30 minutes or less. A little over half a decade later, the company is expected to finally begin rolling out Prime Air in select cities later this year.

At the 2019 re:MARS conference in Las Vegas, Amazon Executive Jeff Wilke estimated that nearly 90% of Amazon deliveries could be handled by drone.

Amazon also debuted their latest drone that is able to take off and land vertically, like a helicopter, but also fly horizontally like a plane.

The delivery giant has also received a special designation from the FAA to test its drones in authorized flight areas. 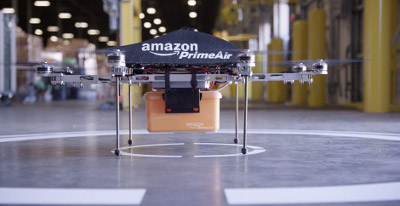 But Amazon is hardly the only company scrambling to drone delivery supremacy. It is not at all a stretch to assume drone delivery for online purchases will become commonplace within the next five years.

Competition in this space is heating up; logistics and tech companies are scrambling to be the first to the finish line, which means development is moving at breakneck speed.

And it’s not just Amazon looking at a sub 30-minute delivery window. There are numerous companies developing drone technology for e-commerce delivery.

Let's take a look at some of the other major players.

In most cases, the standard use for drone delivery is package delivery.

With the strength of modern supply lines and logistics, it’s the last mile of a delivery that is often the most difficult. Here are two companies working on drones for package delivery.

In 2019, the package delivery giant received Part 135 approval from the FAA.

Part 135 is an FAA regulation that allows drones to carry property of another for compensation beyond the visual line of sight.

This would allow UPS to set up drone operations nationwide should the company choose to.

UPS has announced a partnership with CVS pharmacies to begin deliveries of prescriptions and retail products from CVS stores. UPS has already started the pilot program in Cary, North Carolina.

Not to be outdone by UPS, Wing has also obtained Part 135 approval from the FAA, though only for the small city of Christiansburg, Virginia.  Wing also has delivery services in several cities in Australia and Finland.

Similarly, Wing has established a partnership with Walgreens and FedEx to deliver both pharmaceuticals and FedEx Express deliveries via drone.

Manna Aero is an Irish-based drone delivery service that is targeting 3-minute food delivery by drone to be the new normal in the next five years.

Manna partners with a restaurant that has a small outdoor space to hold multiple drones.

The restaurant loads the drone with the order and it flies to the delivery destination.

Once the drone arrives, it hovers outside of the destination until the customer comes outside and uses their smartphone app to release the delicious payload.

Flirtey is the drone company that is partnering with Domino’s to make pizza delivery drones possible.

But they’ve got more than pizza up their sleeve.

Flirtey is currently partnering with the city of Reno, Nevada to deliver Automated External Defibrillators (AEDs) for the immediate treatment of a person experiencing cardiac arrest. A simple call to 911 promises to deliver an AED in 10 minutes or less, potentially faster than paramedics can arrive.

Flirtey is actively working on getting Part 135 approval from the FAA and expects to receive it sometime in 2020. 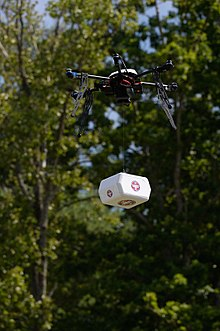 Aha.is is Iceland’s largest e-commerce website. It has developed a partnership with Flytrex, and has been delivering consumer goods and food by drone in Iceland since 2017. Delivery times for consumers are as low as five minutes. That program is now expanding from a single route to 13 routes.

The whole process is automated from Aha.is shopping app.

King’s Walk Golf Course in North Dakota is using Flytrex drones to deliver drinks and snacks all the way to the 18th hole.

In mid-2019, ride-hailing company Uber announced that they will be launching drone deliveries of McDonald’s (NYSE: MCD) in San Diego.

Uber still does not have FAA approval to conduct such deliveries.

Deliveries won’t be made to customers houses, but instead to designated safe landing zones.

Uber does have the distinct advantage of having many existing delivery partnerships with its UberEats platform.

We’re on the cusp of a delivery revolution.

Drone deliveries are actively being tested, regulated, and approved across the globe.

The promise of a 10-minute or less pizza has never been closer.

These little automated helicopters have the potential to change the economy the same way companies like Amazon killed brick-and-mortar retailers.

The question is, who will be the first to be commercially viable?