Special Report: Like FAAMGs in the 2000s: Buy the Dip in Chinese Tech Stocks

In a 1959 campaign speech, future President John F. Kennedy famously said, “In the Chinese language, the word ‘crisis’ is composed of two characters, one representing danger and the other, opportunity.”

That phrase, or variations of it, have since become staples of consultant presentations, motivational speeches, and sales pitches around the world.

Too bad it isn’t accurate. The word 危机 (“crisis,” literally “danger point”) does not in fact contain the entire word 机会 (“opportunity,” literally “point of ability”).

The Chinese etymology of President Kennedy’s remark may be false. But the spirit of the phrase — that moments of great adversity often yield valuable chances for profit or improvement — is inarguably true, especially in investing.

And ironically, one of the most potentially lucrative examples of opportunity-in-crisis on the market right now can be found in Chinese stocks.

Crisis and Opportunity in Chinese Markets

The world’s most populous country has had a bad couple of years.

Its largest trading partner, the United States, became sharply critical of its export practices after the election of Donald Trump in 2016 and briefly imposed tariffs on it. The subsequent Biden administration has only been marginally friendlier on trade policy.

Then, in late 2019, it allowed a local outbreak of a novel coronavirus in Hubei Province to spiral out of control into the ongoing COVID-19 pandemic, while covering up the severity of the problem for as long as it plausibly could.

To be clear, all of the economic and political problems listed above are very real issues. Many of them aren’t completely resolved yet, and several of them are largely self-inflicted.

But they’re not going to keep China down for long. It’s still the world’s most populous nation, after all, and it’s still willing to use any means necessary to maintain its dizzying pace of economic growth.

Just look at this logarithmic graph of COVID-19 cases per million people in the U.S. and China. Despite being the origin of the pandemic, China has consistently reported lower case numbers since last spring — and has moved much faster than the West in reopening its economy. 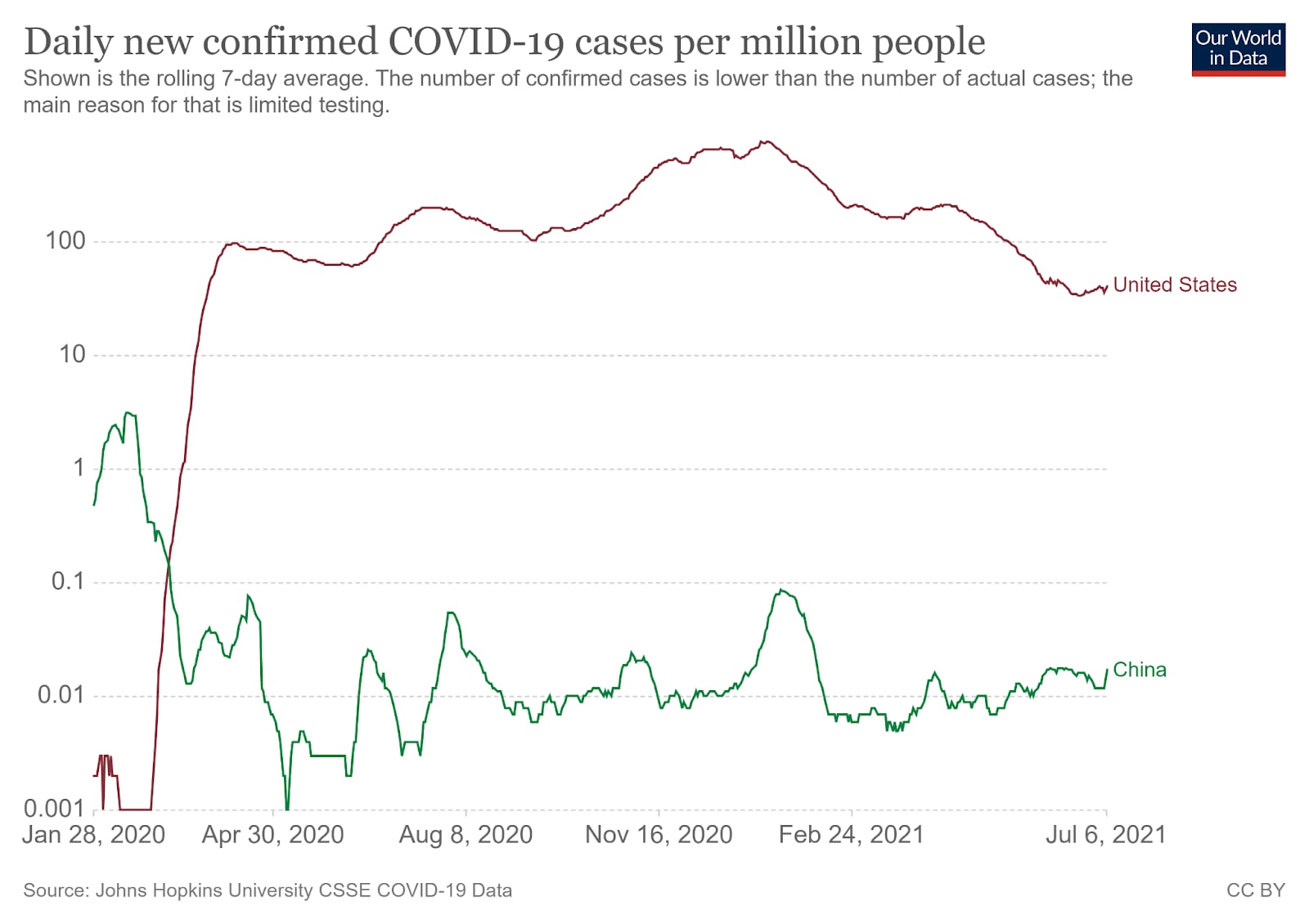 Now, are those case numbers accurate? We’re inclined to say no. Given China’s reticence to report the severity of the situation early on in the outbreak, it seems foolish to trust their data now.

But the bleak thing is, from an investor’s perspective, it may not matter. Regardless of whether China truly conquered the virus early on, or whether it has been covering up second and third waves of mass infection, its economy has emerged from the pandemic stronger than ever.

That economy — which grew 2.3% during the COVID-19 recession and is expected to grow 8.5% this year — is largely powered by a trend of mass rural-to-urban migration which is nowhere near over.

Even in today’s megacity-studded China, less than half of Chinese people — 49.2%, according to recent census data — live in urban areas. For comparison, the U.S. hasn’t had a half-rural, half-urban population like that since 1920 — the start of a period of rapid economic growth.

Chinese peasants are still pouring into cities by the millions each year in search of better-paying industrial and service jobs and higher standards of living. It’s a demographic change not unlike the Great Migration in the early-20th-century U.S., in which farmers from the rural South and Appalachia moved north and built up the industrial Midwest. It’s no wonder China’s gross domestic product (GDP) has been rapidly gaining on the U.S.’s for decades… 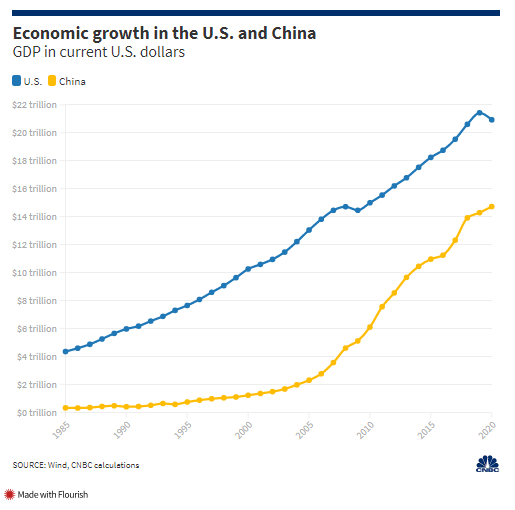 Of course, at the time of the Great Migration, America’s rural-to-urban migrants were spending their new incomes on goods and services which are rudimentary by today’s standards. Indoor plumbing, cars, radios, that kind of thing.

Chinese migrants, by contrast, are spending their newfound wealth in a much more technologically-advanced economy. They’re buying smartphones, electric vehicles (EVs) and streaming subscriptions — and in the process, they’re accelerating China’s rapid transition into a high-tech services economy.

To that end, investors in Chinese stocks should consider a different set of stocks than the kind that made investors in America rich in the 20th century...

China, similarly, is leading the world into a variety of soon-to-be-ubiquitous tech and lifestyle concepts, like mobile-first payment (92% of Chinese citydwellers use Alipay or Wechat Pay as their main means of payment) and TV cord cutting (there are more paid accounts with Chinese video streaming services than there are people in the U.S.).

To that end, the stocks which give investors the best access to China’s dizzying economic growth aren’t manufacturing stocks, but rather tech stocks.

They even have their own acronym, the “BAT” stocks…

Founded in 2000 and based in Beijing, Baidu is the operator of China’s largest search engine, which is also the world’s fourth-most-popular website according to Alexa rankings.

Baidu is often compared to Google, and it does operate a similar suite of web services in addition to its signature search engine. These include online maps (Baidu Maps) and online file storage (Baidu Wangpan).

But in some ways, Baidu is more diversified than Google in its web services offerings. The company also owns the collaborative encyclopedia Baidu Baike, China’s closest equivalent to Wikipedia, and Baidu Tieba, a Reddit-like website of user-generated forums.

It is also one of the world’s largest AI and machine-learning companies, with more than 7,000 published AI patent applications in China.

In the most recent quarter, Baidu’s earnings per share (EPS) soared a dizzying 62,468% year-over-year on just a 24.8% increase in revenue.

The company also has a comfortably low debt-to-equity ratio of 36% and a shockingly low price-to-earnings (P/E) ratio of 8.73%.

Shares are up more than 1,300% since their debut in the 2000s — but they have plenty of room to run from here with Baidu’s current valuation and growth prospects.

Like Baidu, Alibaba is often described as a Chinese mirror image of an American tech giant (Amazon) — and like in Baidu’s case, the comparison isn’t quite accurate.

In addition to its e-commerce businesses — which, as discussed above, are actually larger and more diversified than Amazon’s — Alibaba is the parent company of Ant Group, the largest fintech company in the world and the owner of the ubiquitous Alipay mobile payment platform.

In its most recent quarter, Alibaba grew revenue by 63.9% year-over-year.

Alibaba shares have not run up quite as much as the other firms discussed in this report; they’re up just 133.27% since its 2014 IPO.

But the stock’s relatively muted performance shows in its valuation multiples. Alibaba has a respectable P/E ratio of 25.68, a great return on equity (ROE) of 17.52%, and almost no debt (16% of equity). Shares appear to be deeply undervalued at the current price level, relative to other Chinese tech stocks.

Founded in 1998 and based in Shenzhen, Tencent is a diversified tech conglomerate which owns entertainment and communication apps and websites. It is the most valuable publicly traded company in China, and its instant messaging service Tencent QQ is the fifth-most-popular website in the world.

Unlike the other stocks discussed in this report, Tencent is a media and messaging tech holding company which isn’t readily comparable to any single American tech company.

Its two instant messaging services, Tencent QQ and Wechat, are something like Facebook Messenger and WhatsApp, respectively. Music streaming subsidiary Tencent Music Entertainment (NYSE: TME), which trades separately in the U.S., is a joint venture with Spotify (NYSE: SPOT) and resembles a Chinese version of that app.

Tencent is also the world’s largest video game vendor. It owns Riot Games, the developer of the popular League of Legends series, and is also a partial owner of Fortnite.

Shares are up more than 1,700% since the company’s debut — but there’s reason to believe their ascent is only beginning.

The Tech Titans of Tomorrow

These three stocks are symbols of the breakneck pace of China’s economic growth. Just 10 years ago, none of them had any name recognition outside of China — but today they’re household names.

The rapid ascent of China’s tech industry goes to show that tech investors must always be looking for the next big trend — or following the recommendation of experts who track them.