Humans have been investing in gold longer than in any other commodity... By a huge margin.

In fact, if investment is defined as  "The strategic storage of value and labor in a physical object, for future transfer", gold has been with humanity as a means of protecting and transferring value since long before the beginning of recorded history.

That's not hyperbole, either. Man's relationship with the yellow metal started about 35,000 years before the first true efforts to record and store information for posterity.

Archaeological sites in Spain, dating back to 40,000 BC, were discovered to contain small bits of natural gold, along with other evidence of long-term Paleolithic inhabitation such as cave paintings and rudimentary tools. 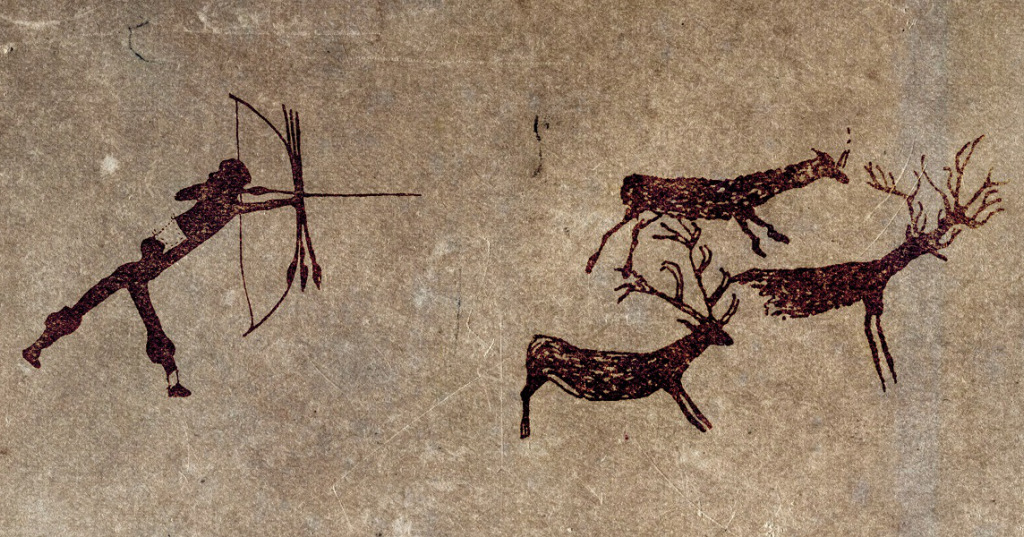 These small pieces of gold, still as shiny as the day they were picked off the ground, proved that even when resources are scarce, and life is more about survival than prosperity, this unique, shiny metal was prized and hoarded simply because it was rare.

In the thousands of years since, gold investing has only grown in popularity and diversity.

In Ancient Egypt, it was the only metal considered worthy of a Pharaoh's death mask. In the age of Antiquity, its role was radically expanded when it first saw use in some of the world's first coins.

Gold was, at that point, a modern currency, produced and distributed with consistency, readily transferable, universally valued... and with the head of the Roman Emperor stamped on it, it was also a means of projecting power and influence far past the Empire's physical borders.

It was also a crime to deface, destroy, or modify these coins in any way — just as it is today with our modern currencies. 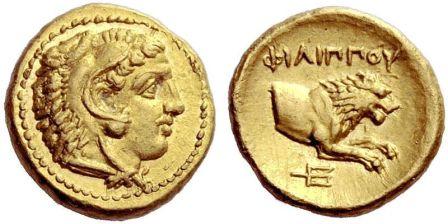 And the only factors distinguishing this metal from all the others are its rarity, its untarnishability, and its color.

Because of those three characteristics, it's been sought and hoarded throughout history. Wars have started over it and peace treaties have been sealed because of it.

The History of the New World: Written in Blood, on Gold Leaf

The Spanish language, which was spread by the conquistadors to the new world 500 years ago, owes its modern-day prevalence to the quest for gold.

The indigenous peoples of South America owe the destruction of their cultures, and the deaths of millions, to that same quest.

Today, we continue to horde it. In Fort Knox and in national central banks across the world, it's stacked as high as it can be.

People even stack it in their own closets and safes.

And yet... Gold has no actual utility that even comes close to the perceived value.

Gold doesn't oxidize, but it's also very soft and malleable.

That's great for when you want a coin that's easy to strike, or some shiny wedding rings, or if you want a thin gold veneer covering the onion-shaped cupola of your Eastern Orthodox church. But when it comes to things like tools, weapons, mechanical devices, or anything else made in mass volume and on massive scale, it's essentially useless.

Even today, the industrial and commercial applications of gold are still very limited.

Besides some very niche, very specialized applications in computer chips and space vehicles, it's just not very useful, or important, to mass market goods or the tech industries.

It was once a crucial material for use in dentistry, but with modern composites, even that demand is all but gone.

This has not stopped the metal from remaining perhaps the most popular investment among people today — and most don't even think of it as an investment.

They think of it as a decoration, just as it's been for thousands of years.

Jewelry accounts for more than 60% of all annual global gold demand. Jewelry made from another metal, typically, is immediately considered inferior.

And that universal fact keeps the demand up, and the prices more or less stable.

It's also the same reason that it's traditionally been seen as a hedge investment designed to maintain personal wealth in times when other mainstream investments are tanking. 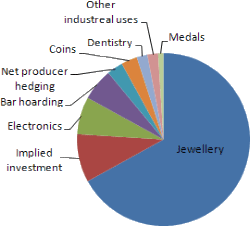 In short, gold is popular because it's always been popular.

What it's not doing, however, is becoming intrinsically more valuable the longer you own it.

Because it's so prized, gold is rarely ever destroyed or converted into a form where it's no longer recoverable.

Even your grandmother's ring, which you think of as priceless, can and will be converted back to its natural state, and sold at market price, if and when necessary.

And while gold can never be too old to be valuable, new gold is arriving each and every day.

So for all intents and purposes, this rare, universally valued commodity is actually becoming less rare each and every day.

It's estimated that in all of human history, 165,000 tons of the metal has been mined.

More than half of that, however, has arrived just in the last 50 years.

Today, gold is produced at an average rate of about 2500 tons annually — or about 1.5% of the total supply, as of 2011 — which means that production continues to accelerate. 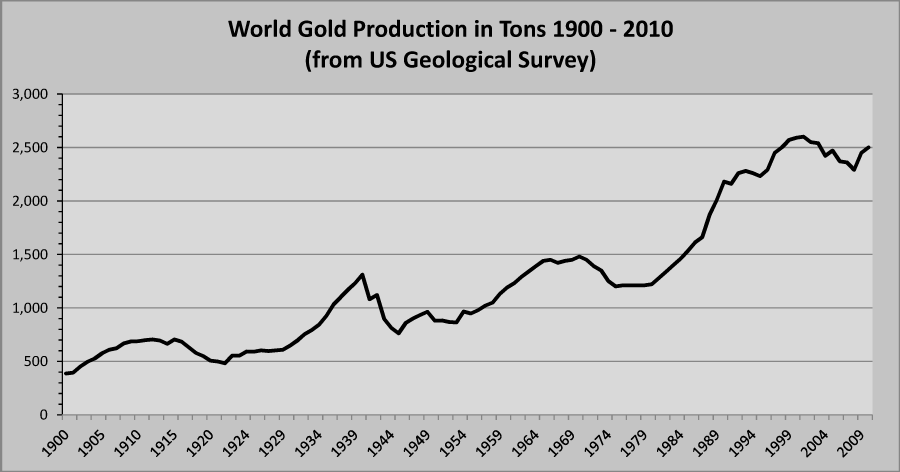 If that doesn't make any sense to you, it's because it makes no sense. Given these facts, gold prices should be declining, steadily, year by year.

Instead they grow, and again, for the one reason gold has ever grown in value... people want it, just because.

Investors, however, need to have a bit more reasoning behind their decisions, and if they must devote a certain slice of their portfolio to a precious metal, there's one out there that actually makes mathematical sense.

It's almost as famous as gold, but not quite. Almost as popular for jewelry, too, but, also, not quite.

It's rare, valued for its appearance, and is very popular for decorative personal and household objects.

What it has that gold doesn't is a global industrial and technological machine which actually consumes the metal in massive quantities in ways that make it irretrievable.

The metal is silver, and yes, there's far more of it than gold in the world.

But here's where the funky math starts to get very, very interesting...

Silver currently trades at about $14.50/ ounce.

So while supply and production rates put gold at between six and nine times the value of silver, its unique demand still puts its market price at more than 74 times that of its less shiny cousin.

And that's not even considering that about 45% of all silver ever produced has been lost. 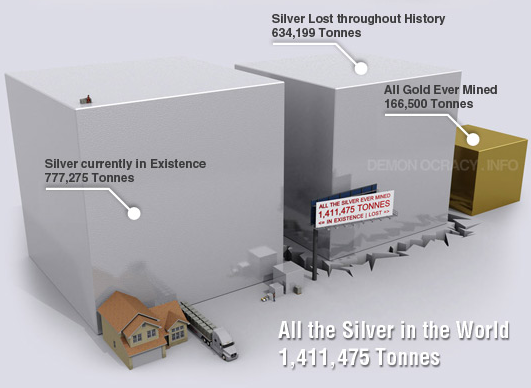 That's inefficient when viewing the two metals side by side as finite resources.

But when taken in context with the massive demand for silver as an industrial and technological metal, what we're looking at is nothing short of a market vacuum... The very opposite of a bubble.

Unlike gold, whose demand comes almost exclusively from the jewelery and coinage industries, Silver's primary consumer is the electronics industry — with 35% of annual demand attributed just to that sector.

Consumer appliances and industrial applications come in second, with 25%

Coins and medals come in third, with 25%.

Photography, even in era of digital cameras, still accounts for 10% of annual demand.

Jewelry and Silverware, at 6%, come in dead last.

So people want silver less, but then need it far, far more... And the disparity between the usefulness of these two metals is only expected to grow in the coming years.

In a recent report produced last year for Washington DC-based Silver Institute, technological and industrial demand for the metal is set to soar by 275% by the year 2018.

Silver is used extensively in smart phones, tablets — essentially any technology featuring a touch-screen — as well as LEDs, solar panels, micro-chips, and a range of newly emerging technologies as well.

All in all, the demand for the latest of everything we tend to binge on as consumers could put silver demand at nearly four times what it is today in just a few years.

Add to that the fact that silver prices today are about 70% down from 15-year highs; while gold is down only 43%, and the argument for silver is complete.

Pondering all this for years, it's hard to understand why such a disparity should even exist... But that's only until you remember that when it comes to gold, and gold fever, the emotional element, not the rational one, is setting the prices.

Buy it now and do with it what you would have done with gold... Horde it.

When the prices catch up to market realities, and they eventually always do, you can always take your silver profits and buy something shinier, rarer, and more yellow to wear on your wrist or finger.