You’ve probably heard the famous Einstein quote a hundred times, but it’s just so on-the-nose that it’s worth repeating for a 101st time…

The most powerful force in the universe is compound interest.

And dividend stocks might just be the most powerful force in portfolio management. With a dividend reinvestment plan (DRIP), you can gradually compound your holdings of dividend-payers over time, and grow your equity portfolio exponentially.

Many investors get their exposure to these lucrative stocks through an ETF or mutual fund that tracks the Dividend Aristocrats index — a set of 53 S&P 500 companies that have raised their dividends in each of the last 25 years.

Owning a Dividend Aristocrats index fund is certainly better than owning no dividend stocks. But there are a couple of problems with this basket of staple equities.

First, the index as a whole has a pretty unimpressive yield. It’s only a few basis points higher than the S&P 500 yield, which sits at 2% at the time of writing.

Case in point: GE (NYSE: GE) was a Dividend Aristocrat a decade ago. But after taking heavy losses in the early years of the Great Recession, it cut its dividend in 2009. The result was… well it looked like this: 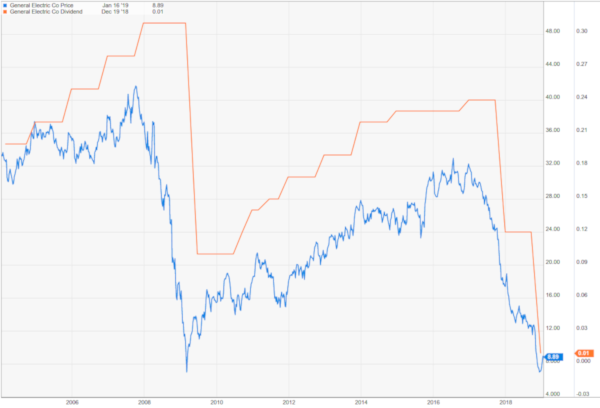 If you can’t count on the safety of the Dividend Aristocrats, how are you supposed to know which dividend stocks to invest in?

This report has the answer. Our research team has run all 53 Dividend Aristocrats through an exhaustive screening process that examines their earnings, cash flows, operations, and more. This screen has identified the seven safest and highest-yielding members of the index.

We call these stocks “Dividend Royals.” On average, they yield more than twice as much as the S&P 500 — and their dividends are safeguarded by steadily growing piles of cash. In other words, they’re safe enough — and lucrative enough — to buy and hold forever. Let’s get to know them…

Seasoned dividend investors might be surprised to see a relatively young company like AbbVie (NYSE: ABBV) on this list. Its Dividend Aristocrat status is sort of a technicality; the company was spun off of Abbott Laboratories (another Aristocrat) back in 2013.

But AbbVie has since surpassed its former parent company — both in dividend yield and in dividend safety.

The drug developer pays a generous $1.07 per share today. That works out to a 5.39% yield at the time of writing. Its healthy cash position - currently sitting at $5.416 billion - provides a measure of security.

It’s no wonder that AbbVie has been able to sustain such impressive dividend growth in the last few years... 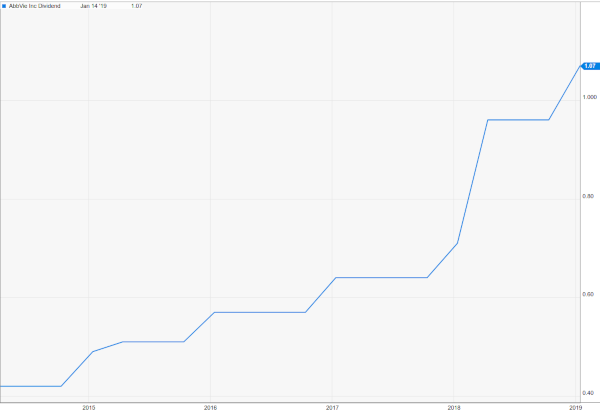 The firm also has a legendarily successful drug pipeline, which keeps growing its cash pile, year after year.

It’s the maker of anti-inflammatory drug Humira — one of the best-selling pharmaceutical products of all time — as well as household-name drugs like Vicodin, Marinol, and Imbruvica.

“But that doesn’t seem like a good reason to buy a stock,” you might argue. “After all, I don’t buy that much corn.”

I can say with near-certainty that you’ve eaten something today, which contained corn syrup, cornmeal, or cornstarch. These corn derivatives can be found in just about all packaged foods — and no one produces more of them than Archer Daniels Midland.

The healthiness of our corny diets is up for debate — but the fact remains, Americans consume more than 12 billion bushels of the stuff every year. That steady demand for Archer Daniels Midland products has allowed the firm to keep raising its dividend, year after year... 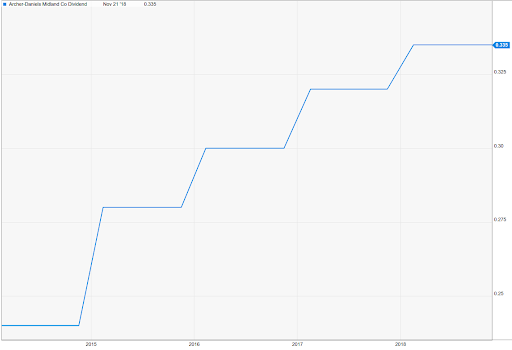 At the moment, the firm pays a healthy 3.29% yield. And its dividend accounts for less than 60% of its earnings.

That means the company could survive a 40% drop in profits without even thinking about a dividend cut.

Oil major Chevron (NYSE: CVX) pays a 4.04% dividend — and it actually does a lot more than just oil. It’s the largest geothermal energy producer in the world, and has been a pioneer in the fast-growing liquefied natural gas (LNG) market. It operates massive LNG processing and shipment facilities in Canada, Australia, and Angola.

This diversified set of energy offerings has allowed Chevron to steadily grow its free cash flow. 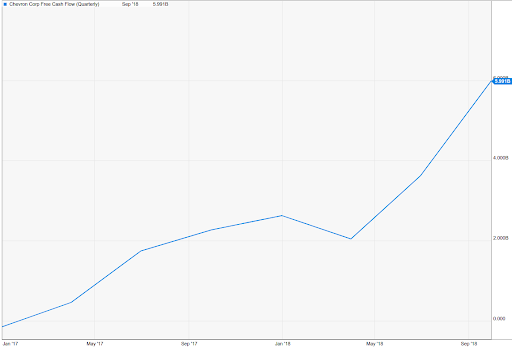 Chevron also has a comfortable payout ratio of 59.35%. It could see a 40% drop in earnings without having to worry about affording its dividend.

Automation is the future — and Emerson Electric (NYSE: EMR) is helping to build that future. It’s paying a nice 2.80% yield in the process.

The firm is probably best known by consumers as a producer of household appliances like InSinkErator garbage disposals. But it actually draws almost ⅔ of its revenue from its fast-growing Automation Solutions segment, which produces autonomous and semi-autonomous machinery for the automotive, energy, medical, and manufacturing industries.

Thanks to this segment, Emerson has maintained a slow-and-steady free cash flow growth rate of 2.61% in the last year. It has also grown its revenue by 5.12%. 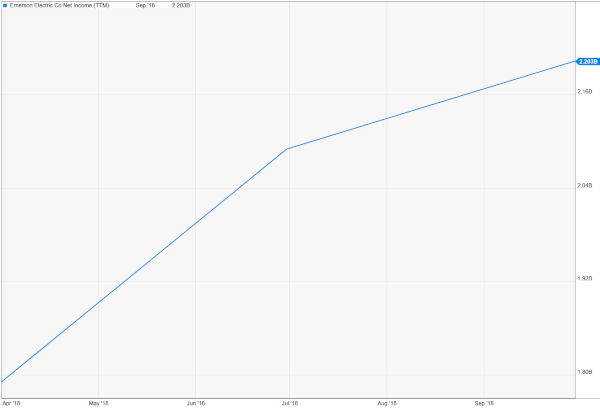 Bedspring production might seem like an unlikely origin story for a manufacturing empire. But that’s exactly how Leggett & Platt (NYSE: LEG) got started.

Today, the firm is a leading producer of bedding components, steel wire, car seats, and more. None of these products are particularly glamorous — but they’re all in steady demand. After all, Americans buy more than 17 million cars and more than 30 million mattresses every year.

The firm's ever-rising dividend currently equates to a 3.05% yield... 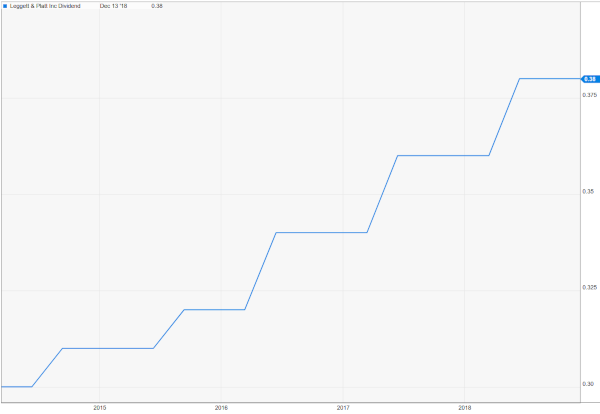 And the firm’s payout ratio of 67.17% is low enough to let long-term dividend investors rest easy.

Not too long ago, AT&T (NYSE: T) was the only telecommunications firm in the U.S.

The government forced the former monopoly to break itself up in 1984 — but since then it has been the second-largest telecom company in the country, serving over 355 million customers in 200 countries. More recently, it has expanded into fiber internet service, adding hundreds of thousands of new IPs each quarter.

Thanks to its historical dominance in the telecom arena, the firm has been growing its dividend every year for generations… 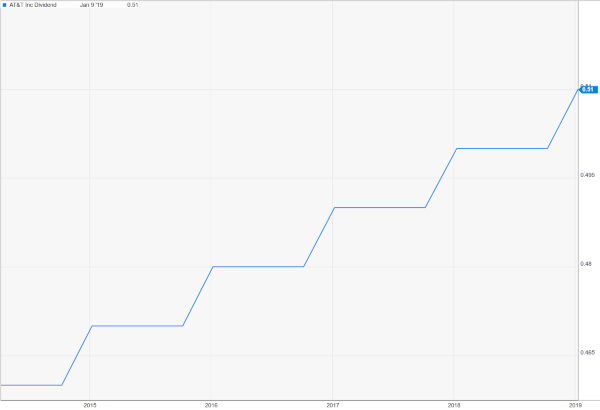 It currently pays a 5.31% yield, which is backstopped by a comfortable cash position of $6.588 billion at the time of writing.

Our last Dividend Royal is ExxonMobil (NYSE: XOM) — the largest oil company in the U.S.

The energy giant pays a fat 5.01% dividend, and there’s a lot to like about that dividend from a fundamental analysis perspective. It has a nice payout ratio of just 80.28% of earnings.

More broadly, ExxonMobil is in a great macroeconomic position right now — it’s the leading U.S. oil producer at a time when oil prices are rapidly recovering from their mid-2010s lows. 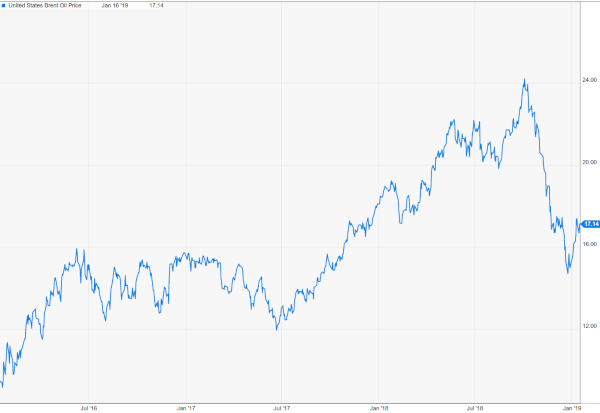 There you have it. These seven Dividend Royals collectively yield more than twice as much as the S&P, and their payouts are many times safer. They provide a smarter way to harness what Einstein called the most powerful force in the universe — compound interest.

This kind of thorough analysis and useful income investing device is exactly what you can expect as a Wealth Daily subscriber.

In truth, though, this report has only scratched the surface of high-yield dividend investing. Our Real Income Trader subscribers receive weekly email updates on a portfolio of dividend stocks, which are even more lucrative than these Royals. Click here to learn more.