Welcome to Wealth Daily! We’d like to start your membership by asking you what might seem like an odd question: What’s the biggest event of the winter season?

There are a lot of contenders, from Christmas and New Year's Eve to the Golden Globes and the Oscars.

But we’ve got a more unconventional pick: the JP Morgan Healthcare Conference, which was held January 7-10 this year in Las Vegas. It might not be as glamorous as the occasions listed above, but you can make a hell of a lot more money off of it.

That’s because the JP Morgan Healthcare Conference is packed with lucrative information for biotech investors. It’s basically an annual show-and-tell session for the industry.

All the big players use the event to share details about all the exciting new drugs they’ve been working on in the last year. And sometimes, those details include important catalysts like PDUFA and BsUFA dates (guaranteed drug approval decision dates from the FDA).

Topline Trader Chief Editor Jason Stutman attended the conference this year and he noticed that five companies stood out as the most dynamic and catalyst-rich in the industry.

Let’s take a look at these companies and the exciting drug milestones that could send their share prices soaring.

Keep in mind that this report details just a small fraction of the catalysts affecting these stocks. There are hundreds of other important dates to keep track of in the wider biotech industry. But more on that in a moment.

French pharmaceutical company Sanofi (NASDAQ: SNY) is the world’s fifth largest by sales. It’s the maker of many familiar products, including over-the-counter remedies like Allegra and Gold Bond as well as prescription bestsellers like Ambien and Plavix.

Like most large-cap stocks, Sanofi didn’t have a stellar 2018, finishing the year with a small loss. But if you look at the firm’s earnings, it becomes clear that this is a buying opportunity.

Sanofi has steadily grown its earnings for the last five years. Recently, the earnings growth rate itself has been growing… 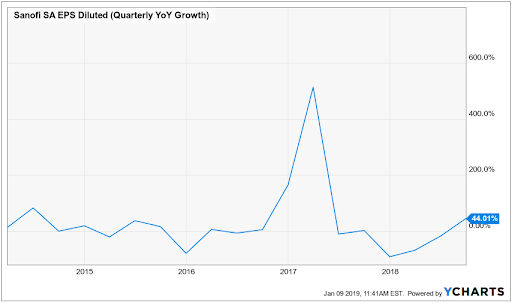 Perhaps more importantly, the firm has several critical drug catalyst dates coming up in the next few months. Two of them are listed below.

This new antidiabetic drug — born of a collaboration with Lexicon Pharmaceuticals — inhibits the production of certain proteins to improve glucose regulation in diabetes patients.

And unlike many diabetes treatments, there are no needles required to administer Zynquista. It’s a pill. In fact, it could become the first ever FDA approved oral antidiabetic for adults with type 1 diabetes.

Praluent is already on the market as a cholesterol drug. Like Zynquista, it works by inhibiting the production of specific proteins.

The drug is currently being tested for a more general application. Research suggests that it does a great job of reducing the likelihood of heart attacks and strokes in at-risk people, even when it’s not being used for its original cholesterol regulation purpose.

German-American pharma giant Merck & Co. (NYSE: MRK) has had a much better year than most companies of its size. Last year was a bad year for stocks in general — but not for Merck.

But perhaps the most exciting thing about Merck is its pipeline. The company is approaching PDUFA dates for several of its new products-to-be. Let’s look at a couple of them…

This humanized antibody was developed by Organon, a small Dutch firm which was acquired by Merck in 2009.

It’s used in cancer immunotherapy and is already approved for certain skin and lung cancers. But now the FDA is reviewing it as a treatment for a much wider variety of cancers and tumor diseases. If approved, sales could skyrocket.

This futuristic gene therapy, developed in collaboration with AstraZeneca, reduces the risk of new cancers in people with a history of cancer or certain genetic risk factors. The drug actually controls the production of certain DNA repair enzymes to ensure that the patient’s cells don’t goof up their internal coding.

Lynparza is already on the market for people at risk of developing certain breast and ovarian cancers. But the FDA is currently reviewing it as a sort of post-chemotherapy safety measure for cancer patients. A decision is due by the end of the first quarter, although the exact PDUFA date is not publicly known yet.

In early January, these two biotech titans agreed to a $74 billion merger deal. The merger will create one big specialty biopharma firm focused on cancer, inflammatory and immune diseases, and cardiovascular problems. 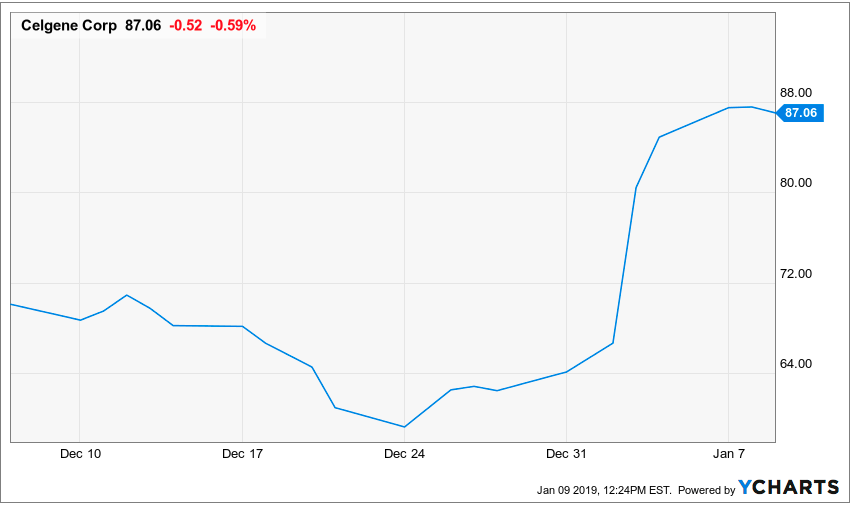 And there’s good reason for all the investor excitement. Celgene and Bristol-Myers Squibb have a lot of new drugs coming up for approval in the next few months. Let’s learn about two prominent candidates:

Together, these high-tech treatments are expected to deliver a one-two punch of chemotherapy and immunotherapy to cancers that are not responding to conventional treatments.

Otezla’s use cases aren’t quite as life-or-death as some of the other drugs we’ve discussed. But if its new uses are approved, it could still be a huge moneymaker for the new Celgene Bristol-Myers Squibb.

This thalidomide analog is already on the market as a psoriatic arthritis treatment, but it’s currently being reviewed by the FDA as a treatment for scalp psoriasis and a variety of other immune system-related inflammatory conditions.

New York-based Pfizer (NYSE: PFE) is another participant in the mega-merger frenzy going around the pharmaceutical industry. Back in December, it revealed plans to merge with Britain’s GlaxoSmithKline.

Pfizer is another stock that bucked the trend of large cap losses in 2018, posting modest returns for the year.

It’s easy to see why. Pfizer’s earnings per share grew a whopping 46.81% in the last year. The firm also sports a safe 3.13% dividend.

Its pipeline is nothing to sneeze at, either. Here’s a glimpse at a couple of Pfizer biosimilars with upcoming PDUFA (or rather, BsUFA) dates…

This antibody is Pfizer’s biosimilar imitation of best-selling cancer drug Avastin. The drug has been quite a moneymaker for its original developer, Roche Holdings, but it will soon go off-patent.

By simply developing an analog of a blockbuster cancer drug, Pfizer is adding a cutting-edge, life-saving medication to its catalog. And it doesn’t have to spend all the time and money required to develop a drug from scratch.

Pfizer is pursuing the same strategy with its new Herceptin biosimilar. PF-05280014 doesn’t have a catchy name yet, but it’s based on some very catchy pharmacology that could bring a lot of new revenue to Pfizer.

Like Avastin, Herceptin is an extremely successful chemotherapy drug originally developed by Roche Holding AG. And just like Herceptin, it’s going off-patent soon, making room for PF-05280014 to scoop up some sales.

Swiss pharmaceutical firm Novartis (NYSE: NVS) is one of the largest drugmakers in the world by market capitalization. Its catalog includes a number of well-known psychiatric medications like Ritalin and Clozaril.

The stock didn’t exactly make any millionaires in 2018, but it held its value while much of the market sank around it.

This is largely thanks to Novartis’s growing revenues, 3.42% dividend, and busy pipeline, which includes...

Spinal Muscular Atrophy Type 1 (or SMA1 for short) is a usually fatal neuromuscular disease which slowly disables the musculoskeletal system (including the muscles needed for breathing and other survival functions). It currently has very limited treatment options.

The exact PDUFA date of Zolgensma is not publicly known, but the FDA has told stakeholders to expect a decision by the end of May.

This bone marrow treatment is already on the market for a number of bone diseases, and it has been quite financially successful in that function.

But now, the FDA is reviewing Jakafi as a potential treatment for graft-versus-host disease (GVHD). This autoimmune reaction is unfortunately common among graft and transplant patients. If the first line of treatment (steroids) doesn’t work, there are a limited number of GVHD drugs currently available.

This is Just a Sampling

This may feel like a lot of information… but in the grand scheme of the biotech industry, it really isn’t. We’ve only given you two PDUFA dates each from five of the biggest pharmaceutical companies on the market.

Each of these companies has dozens of other PDUFA dates this year. And there are many other catalyst dates to keep track of besides PDUFAs. There are hundreds of other biotech firms out there, some of which can give you much larger gains than the big players we’ve discussed here.

Here at Wealth Daily, we’re always doing our best to keep you informed of major market-moving events. We hope this roundup of JP Morgan Healthcare Conference catalysts has done that.

But ultimately, this is just a sampling of the hundreds of catalyst dates that can make you big profits in the healthcare sector. To keep track of all of them, you’d need a continuously updated calendar which tracks every major biotech catalyst from every publicly traded company.

Fortunately, we have such a calendar. It’s available — along with a host of useful reports and regular email updates — to our Topline Trader subscribers. Click here to learn more.