Special Report: Buy This Stock Now and Hold It Forever

Perhaps the toughest part of being a stock-picker is when you’re asked to pick something that you’d want to own forever. And most of the best analysts will fail miserably if you ask them.

Up until a few years ago, General Motors (NYSE: GM) was considered a must-own stock for the “widow and orphan” crowd (that’s a slightly dated term used to describe folks who don’t have steady income streams coming in).

But if you’d listened to them and plowed your savings into GM stock back in 2017, you’d have watched as 50% of your nest egg got wiped away as GM fell out of favor: 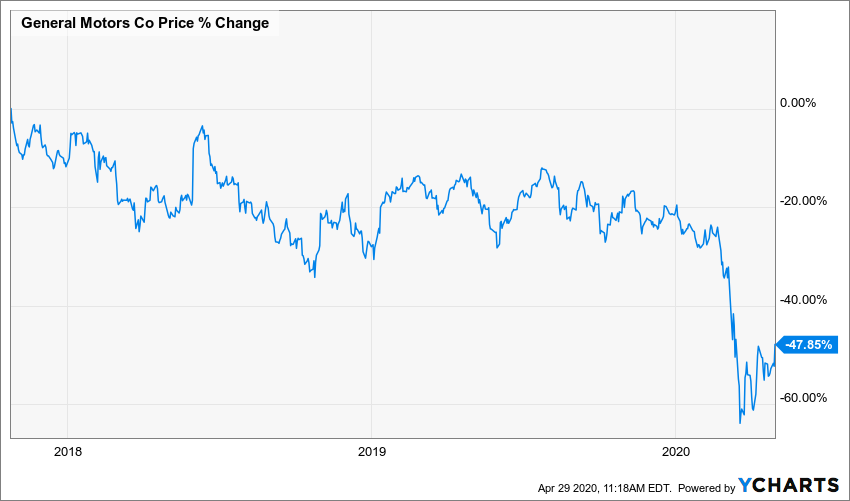 U.S. Steel (NYSE: X) used to be a pillar of American strength. But since nearly collapsing in 2008, it’s done just about nothing for investors since... 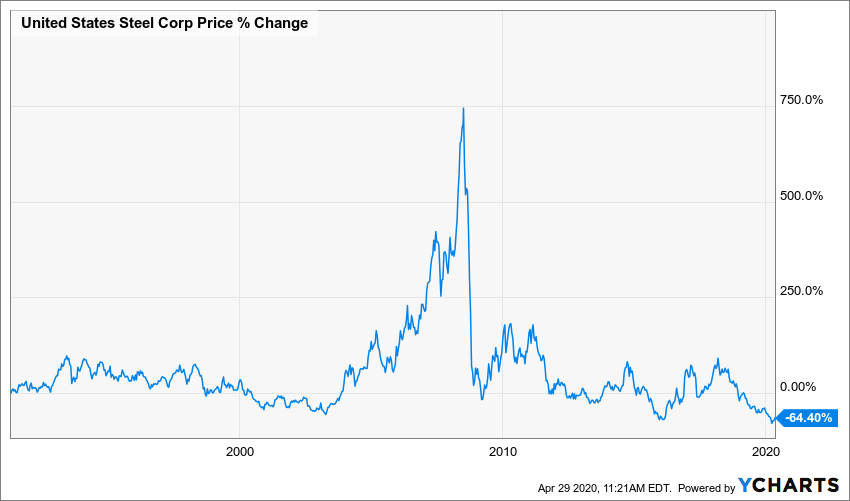 Or, take Polaroid and Eastman Kodak as more examples. Both were touted as buy-and-hold stocks, companies you should own forever. Polaroid went bankrupt and was bought by a private investor. Kodak also went through bankruptcy and restructured itself. But it’s been a nightmare for investors since... 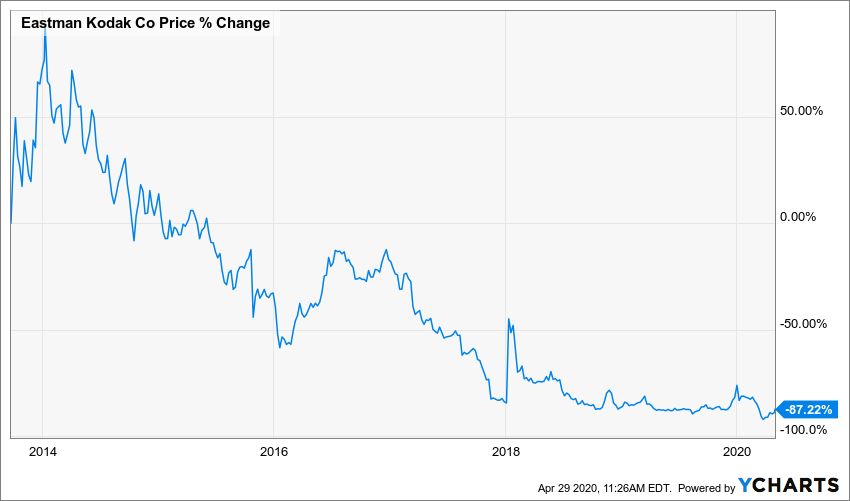 The U.S. markets have become short-sighted over the years. All investors and analysts care to pay attention to is the next quarter. But most of us don’t have the time or the patience to be constantly analyzing stocks.

We want to be able to set it and forget it and go about our daily lives with the confidence that we’ve invested in companies that will stand the test of time.

But as you can see by the performance of the three former “forever” stocks above, predicting what’s going to happen 50 years from now is tough.

And that’s why Wall Street focuses on the short-term –– it’s easier to get right.

But here at Wealth Daily, we’re not hiding behind quarterly reports. And in my investing community, The Wealth Advisory, we’re not out to gamble on the stock market like a drunk frat boy in Las Vegas.

We’re long-term investors. And that means we have to look well beyond quarterly reports and monthly economic indicators to pick our investments.

And we’re pretty good at it. We’ve beaten the market every year our community has existed. Our cumulative total gain on open positions is over 2,000%.

We helped investors zero in on the only cannabis investment suitable for a long-term strategy. They’re up to over 300% in just a few years on that.

We absolutely nailed the shift to telehealth that’s only been accelerated by the pandemic that struck the world in early-2020. Our investors bought in back in late-2019 and they’re up nearly 300% since then.

I’m not trying to brag here. Just to show you that we, unlike the analysts on Wall Street, really do see the big picture. We don’t miss the forest because we’re too busy looking at the trees.

And that’s why we decided to put this report together. You deserve research that’s thorough. You deserve analysts that don’t hide in a field of mediocrity. And we’re here to give you just that…

Buy This Now and Hold It Forever

I’ve spent most of my life working in the financial industry. I started as an investment banker on Wall Street. But I’ve also advised countless startups, the Department of Defense, major banks, and oil companies, and thousands of individual clients as well.

And I’ve spent countless hours combing over financial information, income statements, cash flows, balance sheets, and everything else I could find to zero in on the absolute best stock for you to hold for the next 50 years and then pass on to the next generation.

EDITOR’S NOTE: Before I get any farther, let me warn you: it’s not exciting and it’s far from a “sexy” investment. But once you finish reading this report, you’ll agree that anything it lacks in pizazz, it makes up for in quality ten times over.

You probably haven’t heard of this company, but I guarantee most of you have used its services (or those of one of its competitors) at least once this week.

You’re probably more familiar with its larger peer, Waste Management (NYSE: WM). They own and operate all those garbage trucks, trash cans, and dumpsters with “WM” emblazoned in green and yellow.

They’re the biggest waste management, comprehensive waste, and environmental services company in the United States. But their size is what makes them less attractive than out forever stock…

As I said, you might not recognize the name. But you probably recognize the blue trucks the company operates across the United States. You might have passed one on the road earlier today and not even thought twice. 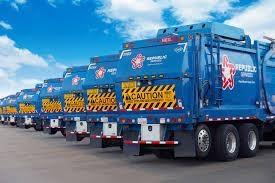 But you should think twice about investing in Republic Services, Inc. (NYSE: RSG) stock. Because it’s one of the best out there and it’s going to be growing forever…

You’ve probably heard that bigger is better, but when it comes to stocks and their potential for growth, it’s the smaller guys who win the fight.

You see, Waste Management already has a market cap of around $43 billion. And it’s already delivered investors blockbuster returns over its long history... 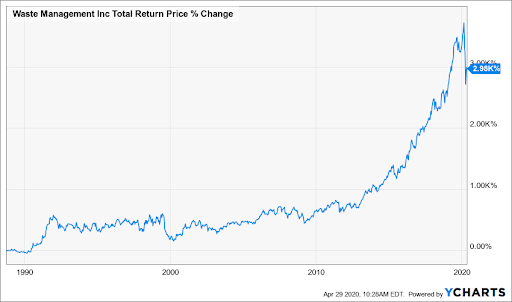 I mean, look at that 3,000% gain –– even after suffering the same drop the rest of the market did in March 2020. It’s a beautiful thing. But it means it’s going to be a lot harder for WM to maintain that kind of trajectory.

Republic Services, however is still about half the size of its larger competitor with a market cap right around $24 billion as I write. But, when it comes to revenues and profits, RSG is a lot closer than that price would have you think.

Waste Management brings in about $15.45 billion a year. And of that, it keeps $1.67 billion as profits. Republic Services comes in a little lower on both measures, but not that much. Its annual revenues are $10.3 billion and its net income is $1.07 billion.

When you break those raw numbers down into profit margins (net income divided by sales), you see that both companies have a 10% net profit margin. They’re actually both equally profitable, and yet one costs twice as much.

But Republic hasn’t let that stop it from returning some serious profits to shareholders over the past: 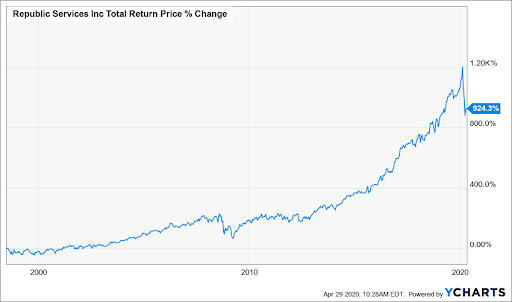 Since the late 1990s, even with the coronavirus crash baked in, it’s still up nearly 1,000%. Not quite as impressive as the 3,000% gain from WM over its history. But that’s why there’s still so much potential ahead.

And speaking of returning profits to shareholders, Republic doesn’t just make its shareholders rich by keeping the stock price moving up. It’s also got a ten-year track record of dividend payment increases that have boosted shareholder's payouts by nearly 600%. 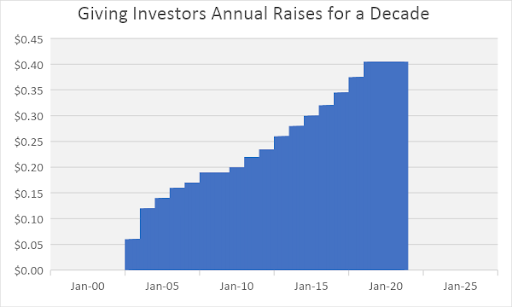 The growing share price and growing dividend payments are what’s going to give you the retirement you’ve always dreamed of. But it’s something else that’ll give you the peace of mind to sleep well at night.

And that’s the fact that waste management and collection is a recession-resistant industry. People don’t stop generating trash just because the economy looks trashy.

In fact, we’re seeing increases in waste for collection in my home of Baltimore thanks to folks being stuck inside their dirty houses for too long.

And the waste collection is definitely not a service folks are going to do away with because they’re having a hard time paying all the bills.

You might put off buying a new car or a new phone and you might cancel your streaming subscription or your Amazon membership to save cash. But you’re not going to live in a trash heap.

Like funeral parlors and doctor’s offices, waste management companies have a never-ending line of customers who need their services.

Investing for the long-term isn’t as easy as it sounds. And picking a stock that’s going to profit forever is darned near impossible.

That’s why you’ve got to look for the best potential in industries that are impervious to disruption by economic forces –– like waste management.

Populations continue to grow and more people mean more trash. Republic is in a great spot because it’s the second-largest company of its kind in the U.S. And it’s still got a lot of room to grow bigger and more valuable.

An investment now is likely to return 3,000% or more over the next three or four decades. And you won’t have to watch all of those profits fly out the window in the next recession.

Republic Services, Inc (NYSE: RSG) common stock is the one you want to buy and hold onto forever.