Special Report: Beyond Gold and Silver: Investing in Platinum

Where's the Love for Platinum?

About 10 years ago I had a conversation with my then father-in-law about gold. I was recommending it as a cheap investment after the dot-com bust.

His reply was something along the lines of, “Why should I buy a company that spends all sorts of money to dig a metal out of the ground — and refine it just so it can be shipped halfway around the world and put back underground in vaults... only now it costs more money to safeguard it?”

This is a good question.

Why isn't gold left securely underground and unrefined where it is safest?

We could trade it like the ancient Polynesians used to trade mythical boulders under the ocean that no one had ever seen... but that would either make too much sense, or no sense at all.

The answer is that all money is an exercise in mythological group-think. A dollar is a piece of paper. A T-bill is a promise to swap a piece of paper with more paper in a few years. Gold has value because, for the past three thousand or so years, it has had value in every culture in the world.

Investors think gold will have value even when “the full faith and credit of the United States government” no longer does. And so they buy it while the world burns.

(Well to be honest, most people buy bits of bytes that tell them they own gold that's in some vault somewhere in the hope that they can turn these bytes into pixels that appear as large numbers on a computer screen. But that's a separate article.)

Gold isn't the only long-term storehouse of wealth. Other metals such as silver and platinum have held this honor.

Platinum is found in the process of mining gold sands and was used by the pre-Columbian Indians of South America for millenniums. That said, it wasn't “discovered” by Western scientists until 1735.

Platinum coins were issued by the Spanish in the 18th century and continued by the Russian Empire in the 19th century.

Most platinum mines are in Russia, South Africa, Colombia, and the Western United States.

Similar to gold, platinum is a soft, dense, ductile metal that is very resistant to corrosion. It is used to make jewelry, wire, electrical contacts, and laboratory vessels.

Platinum is used to coat missile nose cones, jet engine fuel nozzles, and other devices that must work reliably at high temperatures for long periods of time.

But the biggest use of platinum is as a catalyst — which is why it is used in the catalytic converter in your car. Catalytic converters combine carbon monoxide (CO) and unburned fuel from a car's exhaust with oxygen from the air, forming carbon dioxide (CO2) and water vapor (H2O).

And as the standard of living grows in countries like India, China, and Brazil, car sales are increasing and environmental awareness is rising alongside them.

China is now the biggest auto market in the world, and despite a low level of sales in the United States, there are expected to be more than 100 million cars produced in the world by 2015. Producers are going to need a whole lot more platinum to make that happen...

This is a mega-trend which points to serious growth in the price of platinum. Demand will surge, initiating a supply-crunch, causing prices to rise.

For the last 15 years or so, platinum has traded at a surplus to gold, the world's most precious metal. Just last year, that relationship switched... 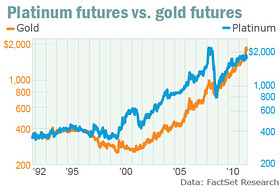 The argument for platinum is that it gets used up in industry, while 99% of all gold ever mined is still out there. Furthermore, platinum is 30 times rarer than gold – and now, more valuable than gold.

Platinum is currently the red-headed step-child of precious metals. James Turk, founder and chairman of GoldMoney, was quoted as saying, "... of the $1.8 billion of gold, silver, platinum and national currencies held by GoldMoney’s customers, only $15 million is platinum."

One of the primary reasons for this is that platinum is less liquid simply because it is more rare. The big fund managers can't move in and out of it as quickly.

The flip side of this is that it can move up much faster than gold when it gets hot. The market, like fashion, is always changing. What is out of favor today will be back tomorrow...

The Crisis & Opportunity approach is to buy those sectors and assets that have value when the market doesn't recognize it. We profit from the inevitable market psychology revaluation. It's simple and it works.

If you want to trade platinum, you can use the physical platinum ETF (PPLT): 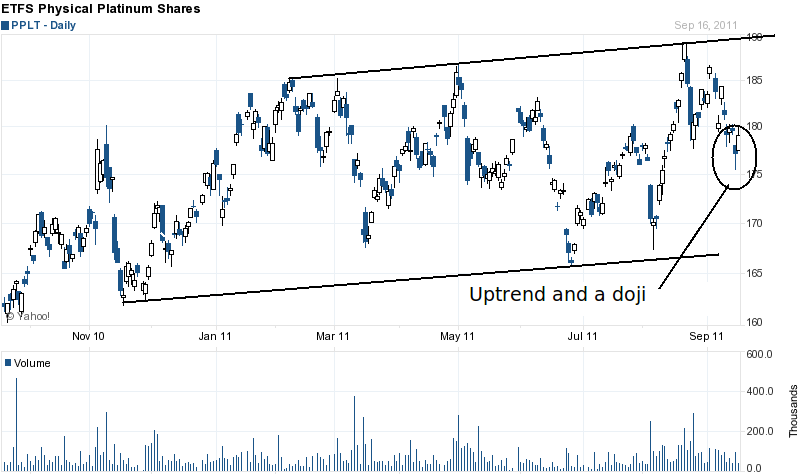 As you can see by the chart, PPLT is in an uptrend with a doji at the 50% retrenchment line.

This looks like a good time to add some to your portfolio.

If the price of platinum returns to its two-decade historical value of twice the price of gold... all the better. From the looks of its steady climb upwards, surpassing the price of gold early this year, it's already on its way to that point...