In the U.S., 76.4 million baby boomers are lined up to start claiming their old-age benefits. That's more than the entire population of France.

The official “first baby boomer” is a woman by the name of Kathleen Casey-Kirschling. She was the first baby born in the United States on New Year's Day in 1946.

She claimed her first Social Security check just over six years ago, and in 2011, she turned 65 — the age of eligibility for Medicare.

Let's not pull any punches here: Senior citizens require more medical attention than other segments of the population. Wheresoever they go, the health care spending goes, too.

So with a huge parade of baby boomers hitting their Medicare golden years, health care spending is soaring, propelling pharmaceutical companies into the stratosphere.

Look at Amgen (NASDAQ: AMGN) as an example. What does Amgen have that would be of interest to baby boomers?

For one thing, it makes arthritis drug Enbrel. According to the Centers for Disease Control and Prevention, 49.7% of adults aged 65 and over have reported an arthritis diagnosis.

You read that right — just about every other baby boomer has arthritis.

Amgen also makes Prolia, a postmenopausal osteoporosis supplement. While this bone condition is nowhere near as common as arthritis, about one in 10 women aged 60 and over have osteoporosis. By age 70, one in five women will have it.

Back in 2000, Amgen's total sales were $3.2 billion. By 2013, they exceeded $18 billion. Sales are growing by more than a billion dollars a year, and it's predominantly to cover the growing population of boomers. Every year, a quarter of Amgen's sales come from Enbrel.

The trajectory of AMGN shares says it all: 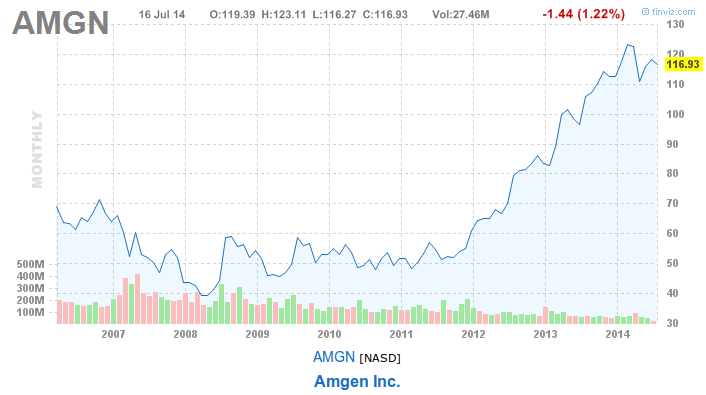 With half of all baby boomers expected to be diagnosed with arthritis and other chronic conditions, companies like Amgen will continue to rise as the population ages.

Generic drugs undercut big pharmaceutical profits by offering treatments at lower prices. They are immensely popular and have created a complicated system of drug patents and varying exclusivity rights.

When a drug company's exclusivity dries up, other companies can submit their own generic alternatives to the FDA for approval. These provide cheap solutions for consumers but destroy the profits of the companies in which we invest.

Between 2010 and 2012, generics cut Big Pharma's revenue by more than $60 billion, and it's estimated that they'll steal another $10 billion a year for the next half decade.

Enbrel, however, is shielded from the popularity of generic drugs. As a biologic (a drug created by biological processes rather than chemical), it is subject to different rules than traditional drugs.

You see, in the U.S., biologics still have no generic alternatives.

Under the Affordable Care Act, the U.S. Food and Drug Administration was given the power to regulate generic biologics — called biosimilars — and the drugs were given a 12-year period of market exclusivity.

If these limits hold, Enbrel still has a few years ahead of it as the second most popular drug in the United States.

In the Obama administration's proposed 2015 budget, this exclusivity could be limited to seven years. The President said this would increase competition and save approximately $4 billion in Medicare over a 10-year period.

Even with a shortened time frame, this could give us a few more good years of exclusive biotech drugs.

Because biologics are still in an exclusivity safe zone, biotech companies are attractive acquisition targets for big pharmaceutical companies.

Bristol-Myers Squibb's Executive Vice President and Chief Scientific Officer Francis Cuss said the company is evolving into a “diversified specialty BioPharma company” and that the acquisition will bolster growing efforts in neurobiologics.

There's another important thing to note here: The best-known tauopathy is Alzheimer's disease.

Along with arthritis, Alzheimer's is one of the most common conditions to strike the elderly. According to the Alzheimer's Association, an estimated 5.2 million Americans have the disease, and 5 million of them are over the age of 65.

The thing is, Alzheimer's is the most expensive medical condition in the United States today. The average per-person Medicaid spending on a senior citizen with Alzheimer's is 19 times higher than that of the average Medicaid recipient.

What's more, there's still no successful treatment for it. Swiss drugmaker Roche (OTC: RHHBY) announced in July 2014 that its Phase II experimental drug Crenezumab failed to slow the decline in cognitive skills in Alzheimer's patients. This followed similar attempts from Pfizer and Johnson & Johnson, whose drugs both failed in later-stage trials.

This is no surprise, though. According to the Cleveland Clinic, 99.6% of Alzheimer's drugs failed their clinical trials between 2002 and 2012.

As the baby boomers age, the number of Alzheimer's patients is expected to triple. Companies working on treatments for the disease are going to be pure gold to big pharmaceutical companies.

Here are three of them...

Acadia's products focus on Parkinson's disease, Alzheimer's disease, and glaucoma. Most of them are currently in Phase II clinical trials, and one of them just completed its third-phase clinicals and received its official trade name.

The drug is called Nuplazid, and it was used to treat Parkinson's disease psychosis in its trial phases. Acadia says it plans to submit its New Drug Application to the Food and Drug Administration in the second half of 2015.

If approved, it would be the first drug approved in the United States for psychosis associated with Parkinson's disease.

Psychosis affects approximately one in five Parkinson's patients, and upwards of two-thirds of all patients experience some minor psychotic symptoms, such as hallucinations or delusions.

It's estimated that as many as one million Americans are living with Parkinson's, which is more than all the multiple sclerosis, muscular dystrophy, and ALS patients combined. There could be as many as 10 million suffering from the disease worldwide.

Sangamo is developing a number of gene therapies for a broad range of ailments, from HIV/AIDS to hemophilia to Huntington's disease.

Its Alzheimer's treatment candidate, known as CERE-110, is in its second phase of clinical trials right now and is one of the most fully developed products the company currently has.

CERE-110 is a therapeutic that uses adeno-associated virus to deliver the gene for nerve growth factor (NGF) into the brain of subjects with early-stage Alzheimer's, with the goal of helping nerve cells function better.

You may have heard about scientists discovering a strong correlation between Down syndrome and Alzheimer's disease. Research has shown that a full 100% of patients with Down syndrome have the pathology for Alzheimer's in their brains by the time they reach age 40.

This has made the Down syndrome population immensely valuable for research in the treatment of Alzheimer's. It has been responsible for the biggest breakthroughs in Alzheimer's treatment in the last 10 years.

Transition Therapeutics has a drug candidate known as ELND005 in Phase II clinical trials that is applicable to both Down syndrome and Alzheimer's patients. It has been shown to reduce both beta-amyloid and myo-inositol levels in the brain.

The amazing effects of this drug will improve cognitive function in patients with Down syndrome and slow down the loss of memory in Alzheimer's patients. It will be nothing short of revolutionary when it reaches FDA approval.

We might not think of senior citizens as being particularly fast, but they are the fastest-growing segment of the population.

At the time of our last census, the overall population growth rate of the United States was 9.7%. The population of persons aged 65 and older was growing at 15.1%.

The United States is getting old!

We can learn a lot from Japan, which is aging at a much greater rate than the U.S. There, the workforce has reduced, consumption of goods has decreased, Social Security expenditures have increased, and the international competitive edge has blunted.

A larger chunk of the economy will be devoted to taking care of the elderly, and the smart investor should take this very seriously.

The time to boomer-proof your portfolio is now.