Her televised jab in the arm marked the beginning of the end of a yearlong nightmare that killed more than 320,000 Americans and devastated the U.S. economy.

The exact number of pandemic-related job losses in the U.S. varies depending on how you count it; estimates range from 16 million to more than 40 million.

Today, a vaccine is being rolled out to the public and those unemployment numbers are falling — but that doesn’t mean Americans are rushing back into the office.

It might be hard to believe after several months of strong job gains and economic growth, but the U.S. is nowhere near recovering all of the jobs it lost during the pandemic.

A recent report by MarketWatch estimates that the economy shed 22 million jobs during March and April alone and has only recovered 42% of those jobs. Credit rating agency Moody’s, which uses the same March–April 22 million number, has predicted that the job losses will not be fully reversed until 2024. 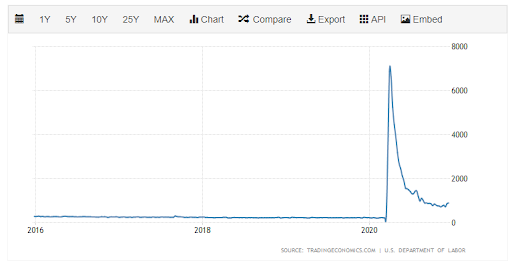 Combine that trend with the proliferation of pro-gig-work legislation, like California’s Proposition 22 (which exempts app-based transportation and delivery companies from classifying their workers as employees), and you’ve got a set of market conditions that should keep the gig economy going well after the pandemic.

So which stocks are set to benefit from the “new normal” of remote gig work? It might be tempting to turn to the obvious plays — the financial media darlings Zoom (NASDAQ: ZM) and Slack (NYSE: WORK). But Zoom’s share price has run up to an absurdly high valuation during the pandemic, and Slack is being acquired by Salesforce (NYSE: CRM).

Today, to profit from the rise of gig-work arrangements, investors must take a broader look at the many types of companies that make these arrangements possible...

The platforms that support gig workers are a good place to start.

The referendum partially rolled back the provisions of Assembly Bill 5, a controversial piece of state legislation that would have forced them and similar gig-economy companies to provide their drivers with employee services like benefits and tax withholding.

It passed by a comfortable 17% margin — in part because surveys have consistently shown that drivers for these companies like their freelancer status and don’t want to be considered employees. Now these firms are lobbying to pass similar legislation in states like New York and Massachusetts — states that have not even passed Assembly Bill 5-style laws yet.

These three companies — which traded at very high valuation multiples before the pandemic — have also been beaten down to more reasonable valuations in recent months.

As you can see above, all three stocks rallied throughout 2020 but are still below or near their all-time highs. Uber in particular has rallied in recent sessions after breaking out of a double bottom pattern — a very bullish technical signal.

Investors will have to see if other gig-platform stocks follow suit...

Of course, the shift toward gig-economy arrangements doesn’t just represent a shift in the way people work. It’s also changing the way people get paid…

Financial Services in the Gig Economy

As we mentioned in the section above, freelancers and gig workers face a very different situation than employees in terms of pay schedule and benefits. This is especially true of freelancers who don’t exclusively work with one of the big gig platforms described above.

The report you are reading now provides one example. I — the guy who wrote this — am actually an independent journalist who writes research reports for Wealth Daily on contract in exchange for direct payments that I use to pay my own taxes, health insurance premiums, and so on.

Recent data published by Edelman Intelligence and NPR suggest that more people than ever are in my shoes; the share of freelance workers in the U.S. labor force hit an all-time high of 36% in 2020. 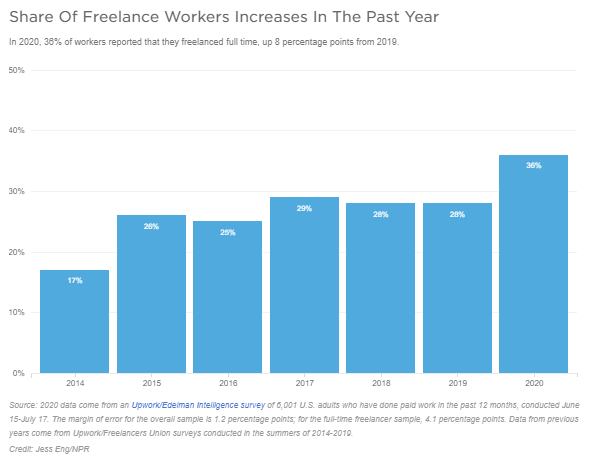 And I can say from personal experience that such workers have unique financial situations. These in turn could be very bullish for certain financial services companies.

Many freelancing relationships aren’t suited to traditional payroll methods like direct deposit. Sometimes this is because companies are reluctant to set up such services for non-employees; other times it’s because many freelance jobs are one-off contracts for which setting up recurring payments would be impractical on the freelancer’s end. Still other times, both concerns apply.

None of these three firms are necessarily undervalued — they’re fintech growth stocks, after all. But given the double-digit (and sometimes triple-digit) free cash flow growth these firms have posted in recent years, there’s reason to believe their momentum will continue to propel them higher long after the pandemic is over.

Now that we’ve discussed how gig workers work and how they get paid, we should talk about the web infrastructure companies that are playing an increasingly crucial role in helping people find work…

We’ve never been more online than we’ve been during the COVID-19 pandemic. Many websites have reported double-digit increases in traffic year over year, and online transactions were up 26.7% in 2020, according to data published by Statista.

Freelancers and gig workers are certainly no exception. In addition to browsing the web more, many are creating their own professional websites to try to attract more work — and are paying many web infrastructure companies quite a bit of money to maintain those sites.

Website-building, file storage, and DIY e-commerce companies like Wix (NASDAQ: WIX), Etsy (NASDAQ: ETSY), GoDaddy (NYSE: GDDY), and Dropbox (NASDAQ: DBX) have all posted substantial earnings beats in their most recent quarters — and, as you can see above, several have broken out of resistance patterns in recent months.

As you can see, COVID-19 has contributed to a tectonic shift in the way people work — one that is likely to last long after the pandemic subsides.

Many economic indicators suggest that the shift toward freelance or gig-work arrangements is only just beginning — and investors still have plenty of time to buy shares of the firms that power these arrangements.

If you’re looking to stay on top of similar emerging trends in the post-COVID-19 economy, check out Technology and Opportunity. Subscribers have been profiting from autonomous vehicle stocks, telemedicine stocks, and 5G stocks for years — since long before these trends hit mainstream headlines.