America has long been a leader in space exploration. After all, we planted our flag on the surface of the moon more than half a century ago.

But it’s worth remembering that the Apollo program was motivated by a competitive spirit. Historians today agree that it was largely an attempt to “catch up” to the Soviet Union’s earlier space achievements.

The Soviets had launched Sputnik 1 — the first artificial satellite — in 1957, long before the U.S. space program had even been funded. They also sent Yuri Gagarin — the first man in space — on his historic flight in 1961, more than a year before President John F. Kennedy’s famous “moon speech.”

Today, there’s a new space race in the offing — and as you can see from the video at the top of this report, the communists have an early lead once again.

This type of unilateral space flight — in which a country launches its own astronauts with its own rockets on its own mission to its own space facilities — is something the U.S. hasn’t undertaken since 2009.

In other words, we’re falling behind again.

But fear not. Just like in the 1960s, the U.S. government is responding with hundreds of millions of dollars of funding for new spaceflight efforts. And shareholders of the spaceflight companies that are receiving that funding could profit handsomely…

Will These Companies Dethrone SpaceX?

For the last few years, NASA has simply contracted with the Russian space program and with SpaceX to send astronauts to the International Space Station.

It would be great if you could buy stock in SpaceX… but unfortunately it’s private. It also manufactures many of its rocket parts in-house and is notoriously secretive about its few outside suppliers. As a result, it’s difficult to find even an indirect way to invest in the company.

But SpaceX can’t monopolize the market for manned spaceflight contracts forever. In fact, several other publicly traded aerospace firms already have close relationships with the U.S. government. A couple of them even helped us get to the moon back in the 1960s. And recently, those relationships have gotten even closer.

In March 2021, the Department of Defense awarded several companies nearly $500 million in contracts to develop rockets for military spaceflights. SpaceX wasn’t one of them.

For now, the contracts only cover satellite launches — but they’re a stepping stone toward dethroning SpaceX as the sole recipient of manned spaceflight contracts.

And as it happens, three of these companies have solid earnings growth, reasonable valuations, and stable dividends. Let’s get to know them…

The United Launch Alliance (ULA) is a joint venture of Boeing (NYSE: BA) and Lockheed Martin (NYSE: LMT), combining the space teams of the two companies.

Long before SpaceX even existed, ULA was known for many years as the “rocket monopoly.” It developed the Delta IV and Atlas V disposable rockets, the longtime workhorses of the satellite industry.

The alliance was also the sole provider of launch services to the U.S. government from the early 2000s until the recent emergence of SpaceX.

And ULA still seems to have a certain sway over the folks in Washington. In March 2021, its subsidiary United Launch Services received $224 million from the Defense Department to launch two U.S. Space Force missions — USSF-112 and USSF-87 — in 2023.

Unfortunately, ULA itself is private — you can’t invest directly in the joint venture. But you can invest in its two constituent companies, Boeing and Lockheed Martin. And they’re both pretty incredible investments.

Seattle-based Boeing is a Dow component, but its growth numbers are a lot more exciting than those of most companies of its size. The stock is up by more than 20% so far this year, as it has been a favorite post-COVID-19 reopening play of investors of all stripes.

Boeing is very heavily invested in space technology, even when ignoring its participation in ULA. The firm has made headlines recently with big investments in space startups, including Accion (a developer of small, scalable electric thrusters) and Millennium Space Systems (a satellite builder).

These investments should ensure that Boeing remains a competitive space stock in its own right.

Lockheed Martin is considerably smaller than Boeing — but by some measures, its financials are more attractive.

In the last 12 months, the firm has grown quarterly EPS by a respectable 7%. Its strong earnings have given it a very low price-to-earnings (P/E) ratio of 15.45 at the time of writing.

Lockheed is also a dividend-payer, with a yield of 2.68% at the time of this report. That dividend hasn’t been cut since the early 2000s, and it accounts for a comfortably low 40% of EPS.

Virginia-based Northrop Grumman (NYSE: NOC) is a bit more than half the size of Lockheed and about a third of the size of Boeing. But in June 2020, it received one of the U.S. government’s most interesting space contracts.

Northrop Grumman received $187 million to create a crew module for NASA’s planned Artemis lunar orbit space station. And unlike Boeing or Lockheed, it gets to keep all that money (rather than splitting it with a joint venture partner).

In the last year, the firm has posted solid quarterly earnings growth of 152.9%. In spite of that growth, it’s cheap by most fundamental metrics, trading for only 13.63 times earnings at the time of writing.

It also pays a 1.6% dividend at a comfortably low payout ratio of only 21%. And after almost 15 years of uninterrupted dividend growth, it’s well on its way to becoming the next dividend aristocrat.

Like the other two companies we’ve profiled, Northrop Grumman has kept its space pipeline fresh through investments and acquisitions. Back in 2018, it completed the acquisition of Orbital ATK (now Northrop Grumman Innovation Systems), a builder of small and medium-sized rockets for government customers.

How About Some Smaller Space Stocks?

These three stocks provide great exposure to the space industry at a time when the federal government is pushing for new investments in manned spaceflight. They’re also just good stocks to have in your portfolio, space efforts aside. 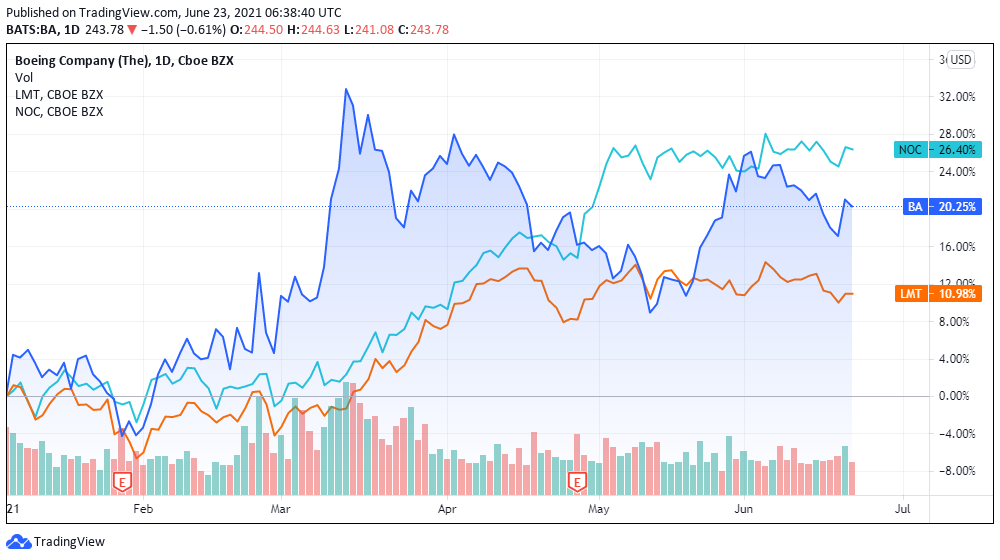 That being said, they are all big, dividend-paying blue chips. They’re excellent buy-and-hold investments — don’t get us wrong — but they’re not going to make any millionaires on a short-term basis. That’s a job for smaller-cap stocks.

Technology and Opportunity editor Keith Kohl has recently identified one such stock — a rocket engineering company with a market cap of less than $10 billion — that is set to blast off in the months ahead as U.S. space funding ramps up. His subscribers are already up 30% on the recommendation. Click here to learn more.