The sun gives the earth 970 trillion kilowatt-hours (kWh) of free energy every single day. This amount is more energy than the entire world uses from fossil fuels every year, and enough to supply the United States' demand for energy for a year and a half.

Of course, solar energy is only as good as the technologies used to harness it. This is why, when solar gained traction in the 1970s, the technology was still very expensive and very inefficient. But a lot has changed since the days of Jimmy Carter sweaters and bell-bottomed salesmen selling solar power systems in high-income California suburbs. Since the 1970s, technology has advanced dramatically, and costs have fallen so low that in some locations it's actually cheaper to power your home with solar than with conventional fossil fuel-based power generation.

As a result, solar is being installed at a record pace. In fact, by 2050, 22% of the world's power generation is expected to come from solar, according to the International Energy Agency. Personally, I think this is a bit on the conservative side, but nonetheless, clearly this kind of steady and impressive growth is making the solar industry a very attractive one for investors.

In the report, you'll see a breakdown of the fundamentals of the solar market and an identification of the various types of solar technologies — photovoltaics, solar heating and cooling, and concentrating solar power.

Of the three types of solar technologies in use today, the most common form is photovoltaics, or PV for short.

PV is typically what you find on the roofs of homes, buildings, and parking structures. The technology allows photons of light to be converted into electricity by a semiconductor, much like a computer chip.

Although the PV effect was actually discovered in 1893, the first PV device capable of producing enough electricity wasn't developed until 1954. In 1958, PV was tested in real-life situations, and the technology remained largely in the research phase until the energy crisis of the 1970s.

PV is often measured in terms of efficiency. No PV device can provide a 100% conversion of sunlight to electricity. And back in the 1970s, efficiencies of the actual solar cells were quite low. Hardly an economic endeavor, considering the price per watt back in the middle-to-late 70s was around $80. Today, however, it has fallen to less than $0.30 per watt. 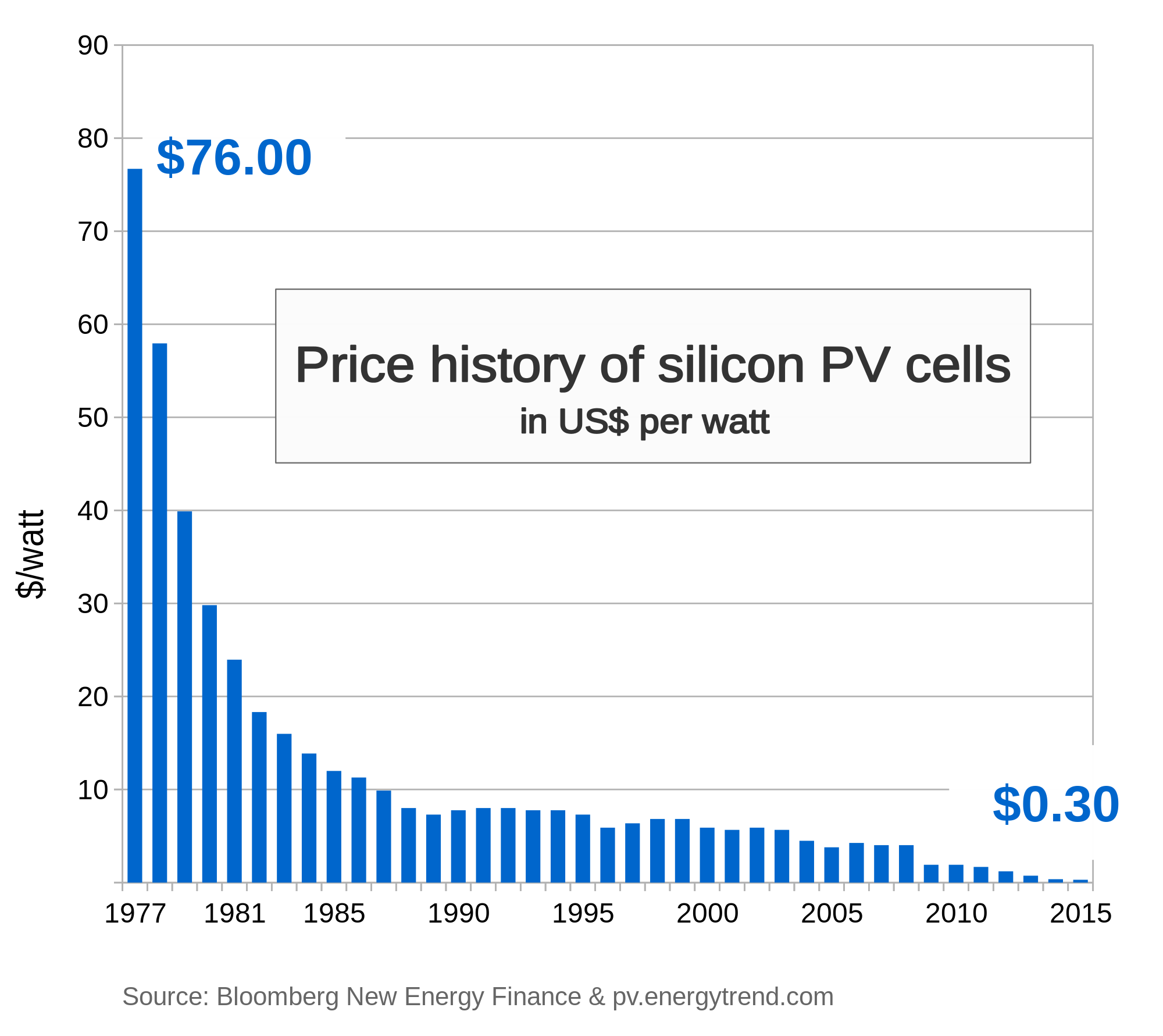 Part of the massive price drop is the direct result of advanced technologies and economies of scale. During the solar boom of the early 2000s, however, PV manufacturers were popping up left and right — and so were silicon suppliers.

Traditional PV modules require silicon. And with the run on PV manufacturing came a run on silicon supplies. In 2000, silicon was $9 per kilogram. By early 2008, after silicon supplies were moving faster than expected, just to keep up with demand, the price got as high as $475 per kilogram.

As a result, silicon suppliers were expanding production in an effort to keep up with demand. But the timing couldn't have been worse.

A few months into 2008, the global economy imploded — right around the time fresh silicon supplies were being produced at record rates. After the global economic meltdown, demand for solar, along with pretty much everything else, fell off. And almost overnight, the PV industry was sitting on a major glut of product. By 2011, the spot price for silicon had fallen below $30 per kilogram.

Meanwhile, for PV manufacturers, margins were shrinking, factories were closing, consolidations were beginning to pick up, and investor sentiment turned bearish.

Governments around the world that once poured hundreds of millions of dollars into solar incentives were pulling back, exacerbating the demand shortfall. And in the United States, high-profile bankruptcies like Solyndra left a scar on the industry that made investors wary of all that they were told solar could offer.

Of course, the solar industry doesn't live and die by a company called Solyndra. And despite fewer government incentives — on a global scale — technology continues to advance, production costs continue to fall, and demand continues to be quite impressive. 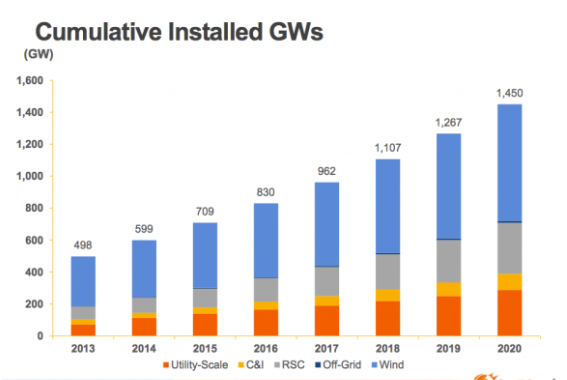 Truth be told, the global economic meltdown that put the kibosh on the PV rush was actually a good thing for the long-term viability of the industry. It essentially cleared out the laggards, forced the industry to expedite cost reductions, and left only the strong to survive. Today, the result is a leaner, meaner solar industry that has both the technological prowess and capital to continue its ascent, leading well-diversified energy investors back to the solar space.

How we Evaluate Solar Companies

When evaluating PV companies, here are a few things we look for …

2.) Marketing flexibility that allows for quick transitions to regions that offer significant government incentives. This doesn't mean all regions lacking incentives are absent a PV market. A successful PV company, however, must be able to concentrate its marketing and sales efforts where PV support is strongest. Reliance on government incentives isn't a static strategy because most countries will find PV costs competitive with coal, natural gas, and nuclear sometime between 2016 and 2030 (depending upon the geographical location). But for the next few years, easy exposure to countries with strong government support offers PV manufacturers a somewhat stable market that can be counted on for a specific period of time.

3.) Quality management with experience in the energy space — not just solar.

4.) Minimal debt, or at least evidence that debt is being strategically managed or eliminated in a safe and fiscally responsible manner.

5.) Access to capital that allows the company to expand and grow without diluting shareholder value.

In the PV space, we recommend the following stocks …

Solar heating and cooling mechanisms “collect” thermal energy provided by the sun. That energy is then used for a variety of things, such as space heating, cooling, hot water, and even providing heat for swimming pools.

Although solar heating and cooling isn't as well-known or popular as PV, it's actually quite efficient and affordable. In fact, the return on investment can be as fast as three years.

Now unfortunately, there's only one publicly-treaded pure play solar heating and cooling company. It's called Sunrain, and it trades only in Shanghai, under the symbol (SHA: 603366).

Some of my fellow analysts suggest that if you want exposure to the solar heating and cooling space that you invest in the companies that supply things like aluminum tubes and specialty glass. Although this strategy does provide an indirect way to play the space, I don't recommend it as the amount of solar-related revenue generated by these companies is minimal at best.

Concentrating solar power, or CSP, is actually the oldest form of operational solar, tracing its roots back to the 1870s, when CSP systems were used to drive steam engines. These steam engines were often used to pump water. Of course, today's modern CSP plants are far more advanced than those 19th-century contraptions.

Using a series of specially designed lenses or mirrors, sunlight is concentrated to the point where temperatures get hot enough to drive turbines that create electricity. CSP plants are used primarily as utility-scale power plants. In other words, they generate enough power to send to the grid, just like a coal-fired, natural gas, or nuclear power plant would.

Now while CSP does allow for “cheaper” solar power when you break it down to the price per kWh, continued growth is limited by such factors as cheap natural gas in the United States, availability of usable land within close distance of transmission and distribution, and the high upfront capital costs that often come with these types of projects.

That's not to say CSP projects aren't profitable. In fact, billionaire Warren Buffett has purchased a couple over the past few years and has indicated he could be looking for more. But, at least in the United States, until natural gas prices get back up to around $6 per Mcf, it'll be hard to convince developers to begin construction on new CSP plants. So for these reasons, we currently have no CSP-related stocks in our portfolio. However, if you want to look into a few developers and indirect plays, you can check out:

Imagine spraying a clear solar film on your windows or covering your entire roof with a sort of solar plastic wrap. Or better yet. Imagine covering your home with a solar paint. This scene isn't science fiction, my friend. It's potentially the future of solar.

Basically, just think of organic PV as a technology that transforms large, bulky solar panels into easily manipulated structures than can be used in a variety of forms — from ultra-thin plastics to liquid sprays to multipurpose outdoor and indoor paint.

One of the advantages of OPV is that it can work with relatively low light. Even under the glow of a hanging chandelier, OPV can suck that light in and produce power. Other benefits of OPV include:

Of course, because OPV technology is still relatively new, there are also a number of disadvantages that researchers are working hard to overcome. These include:

No pure play OPV companies exist at the moment. And if they did, they'd be extremely risky. So there's not much here for investors. However, it's important to understand that this technology exists, and is being advanced.

OPV potentially represents some very serious future competition for the leading PV manufacturers today. In fact, as OPV technology advances, it's likely that the major PV players will acquire much of this technology.

A Nation of Installations

While solar PV manufacturing maintains a steady pace, across the globe, especially in the United States, the installation market is booming.

With lower selling prices from the PV manufacturers, installers have been able to offer some pretty amazing deals to consumers. And through solar leasing programs, some installation companies are now pulling in hundreds of millions of dollars a year. 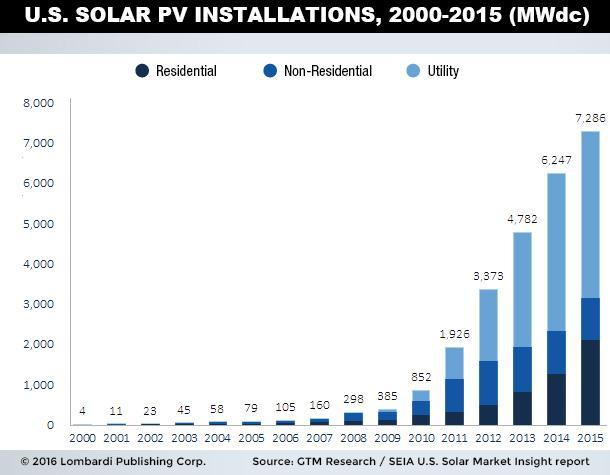 Now solar leases haven't been around that long, but they have been wildly successful.

With a leasing model, a homeowner can lease a solar power system with little or no money down, reducing the electric bill while allowing the sun to produce much of the needed electricity. The leasing company takes care of pretty much everything: It covers the materials, panels, the installation, the inverters, the insurance, even cleaning and maintenance.

Solar leasing has really given the solar industry a shot of steroids. In fact, in many states, solar leasing accounts for more than half of residential installations.

Vivint Solar (NASDAQ: VSLR) is a key player in this sector.