Using the Gold:Silver Ratio When Silver is High

Silver medals may take second place to gold in Olympic competition, but in the financial arena, silver has beaten all the precious metals in growth performance this year.

Check out the latest scoreboard, substituting copper for bronze:

While athletes covet the gold medal, investor demand is for silver — pushing up silver's price to its best winning streak in 45 years, averaging gains of more than 1.6% each week this year.

So what's behind silver's outstanding performance? Will it remain atop the tallest podium in the winners' circle? One metric in particular is screaming, "Go, Silver, Go!" as it points to much higher silver prices to come.

It's a Relative Play

In this exposé, let's skip the usual background on supply/demand fundamentals and monetary policy concerns. Let's focus instead on how to make money trading — how we can get the most of our investment in precious metals regardless of whether they move up or down.

Believe it or not, you can improve your precious metals allocation simply by trading gold and silver against each other. It's based on the gold:silver ratio, and silver's performance is of Olympic quality for which it deserves a medal.

As we all know, silver is tethered to gold. When the yellow metal moves up or down, the white metal moves with it. But that tether is not a string; it's an elastic band.

As such, there are times when gold will move faster than silver, increasing the gap between them. The elasticity of the gold-to-silver ratio will suddenly snap silver forward, causing it to move faster than gold to catch up. This gives silver greater momentum than gold, causing silver to periodically outperform gold as noted above.

But that elastic tether works the same in the opposite direction, too. At some point, silver will have outpaced gold so much that any drop in the gold price will pull silver down faster than gold.

Notice how the 2008 correction increased the gap between silver (black) and gold (gold)?

When traders realized silver was undervalued relative to gold, they piled into it with gusto in 2010, giving it a momentum that caused it to overshoot gold on a percentage basis and sending it soaring. By May of 2011, while gold was measuring a 130% gain over 2006, silver hit 240% over its 2006 price.

That is what is happening now. And the simplest way to profit from it is to trade the ratio.

The simplest way to profit from this twirling waltz between gold and silver is to buy the one that is undervalued and sell it when it is overvalued. Even though both prices will move down together and incur losses to your combined allocations, the dollar-cost averages of the two investments will improve by sliding funds between them at the appropriate times and in the appropriate direction.

When are those appropriate times, and what is the appropriate direction? For this, we need a chart of the gold:silver ratio itself, as shown below. 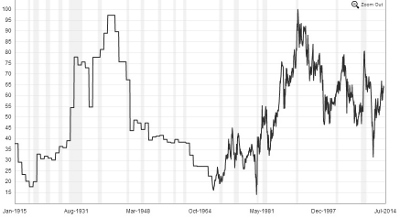 Trading the Gold:Silver Ratio — For Protection

In the 2008 correction, which ran from about March to November, gold and silver fell pretty much at the same rate during the first half. By July, their ratio had held pretty steady at 52.63, as noted in the graph below. 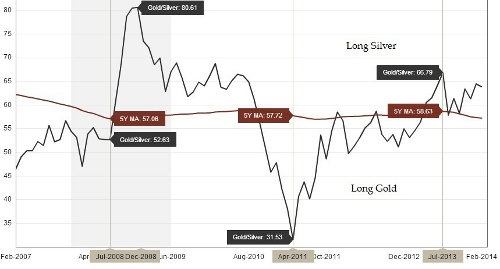 But then silver started to sell off like gangbusters. By December, silver had fallen so much that the price of gold relative to it had skyrocketed up to 80.61. (Again, think of that number as tracking the price of gold. A higher number means more expensive gold.)

You want to buy the cheaper of the two, switching when the other metal becomes cheaper.

However, if you had switched to gold, which was below the five-year ratio average, you would have lost only 22% of your gold holding as GLD fell from $90 to $70.

Note that you would have still lost money during the correction. But the impact would have been much less severe simply by using the ratio as your guide.

Trading the Gold:Silver Ratio — For Profit

But we're not finished. We want to make a profit, not simply minimize our losses. The ratio trade can help you do that remarkably well during bull runs.

By the end of the correction in December of 2008, you would have switched out of gold and into silver, since gold was then well above its five-year average ratio and thus too expensive. You would have remained long silver until gold became cheap again, which happened after August 2010.

Let's put both legs together and compare what our combined return would have been based on a $1,000 investment across three different scenarios: if we had left that $1,000 in gold the whole way through from July 2008 to April 2011, if we had left it in silver, and if we had switched according to the ratio (holding gold in leg 1 and silver in leg 2).

Of course, the above calculations are based on perfectly timing the tops and bottoms, which no human can do consistently. The best we can do is trade the gold:silver ratio as a number.

Follow this rule, and no matter where you put the finish line, straight gold and straight silver positions will always be fighting each other for the bronze and silver medals — while trading the ratio number against its five-year moving average moves on to capture the gold.

As it stands currently, the ratio trade tells us to be long silver. It's the only game in town where silver is the better prize over gold.