On the Watch for a Nuclear Rebound

Few may recall the uranium spike of 2007, when prices went parabolic from about $40 per pound to nearly $140 in that one year. But for reasons I describe below, the price fell just as quickly, back to $40 by 2009.

Then it spiked a second time, with prices climbing to $75 by early 2011. But this spike was interrupted by the nuclear disaster at Fukushima, Japan, when an earthquake caused the meltdown of several nuclear power reactors in the region. Numerous plans for new reactors around the world were put on hold and subjected to new safety reviews, while Japan shut down its 50 reactors one by one until all were offline by September 2013.

By July of 2013, uranium prices had fallen to $35 per pound where they have remained ever since. Yet recent news out of Japan and a global uranium market report may be indicating the uranium price has put in a floor…

• Japan expects to reopen 10 reactors by this summer. In all, some 17 reactors have applied for permission to reopen. Prime Minister Abe also reaffirmed his government’s commitment to resume exporting nuclear power plants and equipment to other nations.

• The 2013 edition of the “World Nuclear Association's biennial report on The Global Nuclear Fuel Market - Supply and Demand 2013-2030” projects nuclear capacity to grow “at a faster rate than at any time since 1990”.
As demand resumes its upward climb, might we be at the beginning stages of the next uranium spike?

To understand if uranium is about to begin its third bull-run of this millennium, we need to look at the circumstances that moved the market the previous times, beginning with exploration.

The World Nuclear Association divides the history of the uranium market into three main exploration cycles:

• 1945 to 1958: “An initial uranium exploration cycle [that] was military-driven.” Funding for uranium mining was government sponsored.

• 1974 to 1983: “The second cycle was… driven by civil nuclear power and in the context of a perception that uranium might be scarce.” Over $4 billion was spent exploring new uranium deposits during this second cycle.

• 1985 to 2003: “There was relatively little uranium exploration” during this lull-period in which some $1.5 billion was spent.

• 2003 to 2011: “In the third uranium exploration cycle, about $10 billion was spent on uranium exploration and deposit delineation on over 600 projects. In this period over 400 new junior companies were formed… All this was in response to increased uranium price in the market and the prospect of firm future prices.”

These three uranium exploration cycles are noted in the graph below (orange lines) as having dramatically increased annual uranium production (green). Uranium’s price spikes of 2007 and 2011 are shown in light-blue (not to scale).

A combination of increasing uranium demand by power plants and nuclear navy vessels (pink) together with the lull in exploration from 1985-2003 led to a dramatic reduction in annual uranium production from 60,000 tons in 1985 to less than 40,000 tons throughout the 1990’s and early 2000’s.

By 2003, total annual consumption above 70,000 tons was double the annual production of 35,000 tons. And that meant only one thing… the price was going to spike.

The Ups and Downs of Uranium’s Spikes

But a funny thing happens when the price of a commodity rises. Without even trying, vast supplies of the commodity suddenly flood the market as if out of nowhere. Where does it come from?

“Measured resources, the amount known to be economically recoverable from orebodies,” explains The World Nuclear Association, “are relative to both costs of extraction and market prices.”

Because not all of the ore is “economically recoverable”, the more difficult deposits are simply not mined when the price is low. Increase the commodity’s price and suddenly all that tough to reach ore becomes economically cost-feasible to extract.

When the uranium price started to rise in 2005, producers could afford to mine the more stubborn and costly ore, and production rose 15 percent by 2006. Add to that a dramatic increase in new deposits discovered during the third exploration cycle and you had all the ingredients for a plunge in prices which began at the beginning of 2007.

Even so, demand still outpaced supply by a margin of 70,000 to 55,000 by 2010, forming the basis for a second spike. But that bull was slain by an earthquake in Japan, which raised concerns the world over about the safety of nuclear power plants.

The construction of new plants were halted pending safety reviews, and numerous existing plants were taken off-line. The demand for uranium was due to fall, taking the price down with it for a second time.

But remember how a commodity’s measured resources are “relative to both costs of extraction and market prices”? Just as rising prices make ore economically feasible to extract, falling prices make it infeasible. As the price of uranium was cut in half from $70 in 2011 to $35 today, producers have once again mothballed a number of their more expensive mines.

So how much uranium will that require? Uranium demand should reach about 97,000 tons per year by 2030, a 56 percent increase over today’s level of 62,000, the report estimates. But there’s one condition…

“Provided that all uranium mines currently under development enter service as planned, the report finds that the uranium market should be adequately supplied to 2025, after which time new mines will be required.”

So we should be good for about the next 10 years, right? Production-wise, yes. But price-wise, no.

That increased production will have to come out of those tough to access and economically less-feasible deposits, meaning the price needs to go back up. Way up, according to the following graph of production costs relative to production quantities. 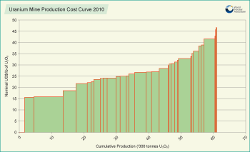 “The above graph,” explains The World Nuclear Association, “shows a cost curve for world uranium producers in 2010, and suggests that for 53,500 tons per year production from mines in that year, US $40/lb is a marginal price. The cost curve may rise steeply at higher uranium requirements in 2012 (with production of 58,344 tons per year).”

Because increased production requires tapping tougher ore, the cost of extraction will cause prices to “rise steeply at higher uranium requirements”.

Where is production today? Some 62,000 tons per year. That requires a cost feasible price of some $45 per pound according to 2010 dollars, or even higher using today’s dollar. At $35 per pound currently, uranium needs at least a $10 upside correction, or 28.5 percent, just to return to today’s true level.

And where should the price be by 2030? If the report’s expectation of 97,000 tons of uranium per year by 2030 is fulfilled, the graph above would put the price of uranium off the chart, up to about $75 per pound or higher.

You might find it tough to wait that long to double your money. Perhaps aiming for the upside corrective move back to $45 might be a more comfortable short term plan.

But once Japan brings its reactors back online – 10 expected by this summer, another 7 sometime later, with still another 33 waiting their turn – demand will grow beyond today’s production levels.

European demand is also expected to grow, as indicated by the “European Commission's 2030 Energy and Climate Policy Framework” released last month, which sets “a binding 40 percent reduction in greenhouse gas emissions by 2030… and an 80 percent reduction by 2050.”

“Nuclear power already produces two thirds of the EU's low-carbon electricity, at very competitive prices, and will continue to do so… Nuclear new builds in a number of countries will contribute to the further reduction of greenhouse gases in Europe.”

Those new projects will likewise contribute to even more uranium demand and price growth. Investors looking to capitalize on uranium’s potential multi-year bull-run over the next 15 years have two great ETFs to choose from: