Why You Shouldn't Buy (or Sell) Tesla (NASDAQ: TSLA)

As most of you already know, Tesla (NASDAQ: TSLA) posted earnings on Wednesday, which makes our focus on the automaker somewhat obligatory this week. I’d been loudly advocating since last summer to short the electric carmaker, with my last “hit piece” published this May, so it's only fair I respond.

I'll start by pointing out that the call period turned out to be fairly well timed, with Tesla shedding as much as 25% of its value in that time frame. I personally managed to make a number of successful trades throughout that period, but earlier this week I took one last short position against Tesla and got burned.

It was a fairly small loss relative to my returns, but I’d be lying if I said it didn’t sting. In fact, it stung enough to make me question ever sticking my hands in that beehive again.

While that’s not to say I’m suddenly a buyer, it’s certainly to say I’m no longer short the position. Why? Because Tesla has developed into an equity that is simply too unpredictable to trade.

Leading up to Wednesday’s call, the market seemed as though it was dead focused on profitability for Tesla. As the leading CNBC headline read, “Tesla earnings watch is ‘all about profitability.’”

Yet when Tesla came out with a wider than expected loss (its biggest ever) and shifted prior profitability expectations from Q3 to the back half of the year, the company spiked 10%.

Within hours, the market’s focus shifted from the income statement to more superficial and meaningless measures.

Elon Musk, who literally sounded sedated during the call (maybe he learned something from the rescue missions in Thailand), apologized for his recent rudeness and erratic behavior. Wall Street ate this up like candy and awarded Musk for stepping back in line.

KeyBanc Capital Markets called it “maybe the most valuable apology of all time,” which, while likely true, is frankly absurd. Valuing a company based on whether or not its CEO is nice to you isn’t only a terrible idea, but it’s also arguably an abuse of power by institutions holding Musk’s manners hostage.

Of course, there are many other factors that investors considered in response to this week’s call, and Tesla had more up its sleeve than simply Elon changing his tune.

For one, the company revealed that it’s working on its own in-house AI chip, which is a legitimate reason to have bullish speculations on Tesla. There needs to be a high level of synergy between vehicles and components if we’re going the driverless route, and an in-house chip could give Tesla a unique edge in that respect.

Tesla, of course, isn’t guaranteed to produce more efficient chips than established semiconductor companies like Intel, AMD, or NVIDIA, but the chance that it could has injected some upside and optimism back into the stock. For better or worse, Tesla feeds off lofty promises and high expectations, this being one of them.

Another factor behind the after-earnings buying spree was no doubt Tesla’s (seemingly) impressive market share data, which purports that the company has eclipsed all other mid-sized premium sedans (combined), with a 52% share in July. 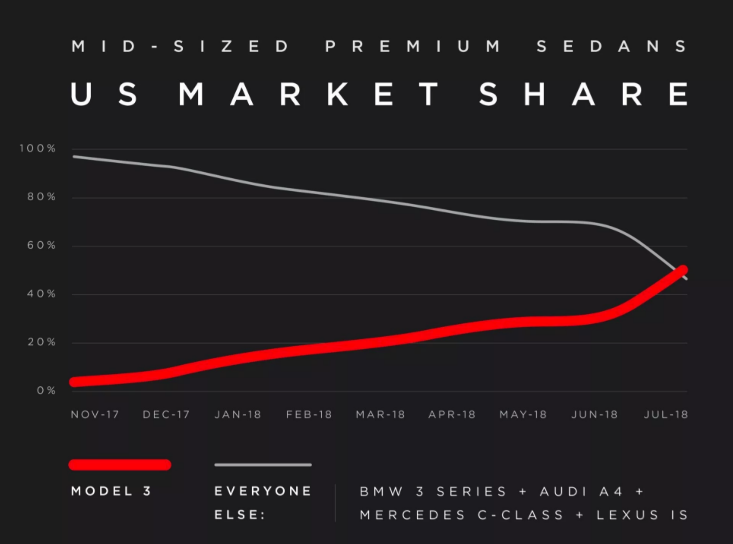 Now, you’ll notice a curious uptick in the final month, which happens to coincide with Tesla’s recent removal of its $1,000 deposit requirement to get to the Model 3’s configuration page.

There’s also something dubious going on here with Tesla’s selection of sedans. The data excludes the Mercedes CLA-Class, BMW 2 and 4 classes, Audi A5, Lexus ES, Acura TLX, Infiniti Q series, Volvo S60, and a number of other vehicle models that commonly fall under the mid-sized luxury car label.

Tesla gets around this issue by creating its own market segment of “premium sedans,” which literally no market research firm has ever used before. For all purposes (aside from pumping up Tesla’s stock), the comparison is meaningless.

As the phrase popularized by Mark Twain goes, “There are three kinds of lies: lies, damned lies, and statistics.” Tesla has proven expert at telling these kinds of lies, so much so that the stock remains untradeable for the foreseeable future.

In other words, there’s so little rationality left in this position that no rational person would trade it. Musk is undeniably adept at manipulating the market, whether it be through social media posts, extortion of short sellers, or bent statistics.

For anyone bearish on Tesla, that’s a nightmare scenario unless you’re 100% sure you’re right and have the finances to remain solvent. It’s also dangerous for bulls who are falling victim to blue-sky aspirations.

Expect Tesla (NASDAQ: TSLA) to remain volatile for the foreseeable future. Right or wrong in the end, any way you trade this right now is a coin flip.