Why True 5G Pandemic Tracking Is a Pipe Dream

It's fairly evident by now that humanity's overall handling of the COVID-19 pandemic left much to be desired.

Yes, there were a couple shining stars, like New Zealand and Singapore, which still have merely double-digit death totals despite the presence of dense population centers, but overall, this experience has been largely characterized by failure, blunder, underestimation, and misunderstanding.

Now that things may finally be starting to wind down, however, an aura of hope is settling over much of the world... Hope that things aren't just going to be different next time, but that this unfortunate mutual experience has ushered in a new era for all of mankind.

As Mr. Gürbüz Doğan Ekşioğlu, the artist behind the New Yorker cover from May 24, 2021, put so eloquently in images, the prevailing attitude toward the future is now one of reemergence. 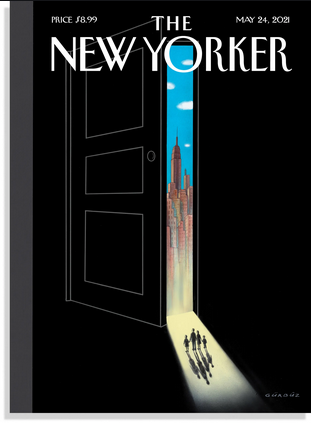 Indeed, there is a lot of validity to this mindset. Common hardship is a profound force for bringing people together. It's the basis for every sort of military indoctrination program that's ever existed, and its also why coaches make their teams run laps and do pushups.

We've all lived through COVID. We're all veterans. We all have something common to discuss, a "where were you when" story to tell, a tear to shed, a fist to beat, a finger to point, etc....

COVID, for all the damage it's done, has brought humanity closer.

And it did so in more than just the spiritual and emotional sense.

Our technology, our economy, our entire way of working, strained under the demands of the early months of the pandemic, have all made quantum-leap advancements since early 2020.

Today, more of us than ever work remotely, and many of us will never go back. Companies have learned ways to manage, optimize, even benefit from the changes.

Years of evolution were crammed into just several months of scrambling for solutions.

Not surprisingly, one of the fields that most benefited from the emergence of COVID is pandemic tracking itself.

With smartphones now near ubiquitous, position tracking software, employed on a mass scale, will now be able to track individuals in relation to other individuals on an almost universal basis.

With such a solution in place, the path of individuals who test positive will be instantly retraced, with all individuals crossing that path instantly identified and notified as to the threat.

The Israelis tested a system very similar to this in 2020, with mixed reviews and ultimately not a whole lot of practical effect.

Though Israel boasted an impressively low infection and death rate in the early months, a second spike raised their national infection rate to about 90% that of the U.S., with a mortality rate twice as low but still rising rapidly.

Next time, things promise to be different, and the reason can be distilled into just one letter and one number: 5G.

You've heard it before a million times, and yes, 5G — the next-generation wireless network that will give us faster, more universal, more complete internet coverage — will play a vital role in the management of the next pandemic.

But only if a major technological hurdle is overcome.

Thing Bigger Than Your Web Browser... Much Bigger

5G isn't just a faster internet, you see. It's much more than that. 5G will allow millions of new devices, and billions of new sensors, placed in the streets, sidewalks, bridges, and buildings of our cities and in the highways connecting them, to communicate with each other.

For this sort of world to exist, current limitations with data storage need to first be overcome — namely, power supply and long-term stability.

Simply put, billions of new sensors, to be practical in a system, must be free of external power requirements, as they need regular maintenance. Without both, the systems becomes too hard too maintain, which defeats the core purpose itself: unprecedented automation.

Traditional data storage solutions today, like the kind your phone or computer use, need power to operate, either from a battery or from the wall.

Flash drives improve on this but are also unstable after a certain number of upload/download cycles — a problem that's a deal-breaker for any sensor designed to operate inside of a structural member of a bridge for years and years on end.

These same sensors will also be tasked with the tracking of human traffic, which means they will be the vanguard of the next pandemic response.

For them to work and for our next pandemic to be managed with the sort of next-gen, 21st-century hyper-competence that we're coming to expect, the question of stable, long-term memory storage will have to be answered.

Today, it looks like that answer may have finally arrived.

The Last Piece of the Puzzle

An Arizona-based company is currently rewriting the books on memory storage. It's created a technology that can be used in a highly critical, highly inhospitable operating environments, including the most inhospitable: space itself.

This company's products have found their way into the industrial, medical, automotive, and aerospace sectors, but the real effect will come when the 5G-powered smart cities of tomorrow start to exploit it for the purposes of modernizing our densest and most intricate population centers.

Now, here's where it gets really interesting.

This company is a virtual unknown outside of the inner tech circles. Its market cap is barely $100 million, making it a tiny drop in the bucket compared with major competitors like IBM (NYSE: IBM), or Intel (NASDAQ: INTC), but if you're an investor, that's exactly where you want to be.

A few years from now, with society barreling toward 5G ubiquity, who knows where the stock will be trading.

There's a lot to this story, so I went ahead and got a video presentation together to lay everything out for you.

Take a few minutes and watch it. It's free, and access is instant.