Why the Minimum Wage Should be Abolished

A Higher Minimum Wage will Lead to Poverty 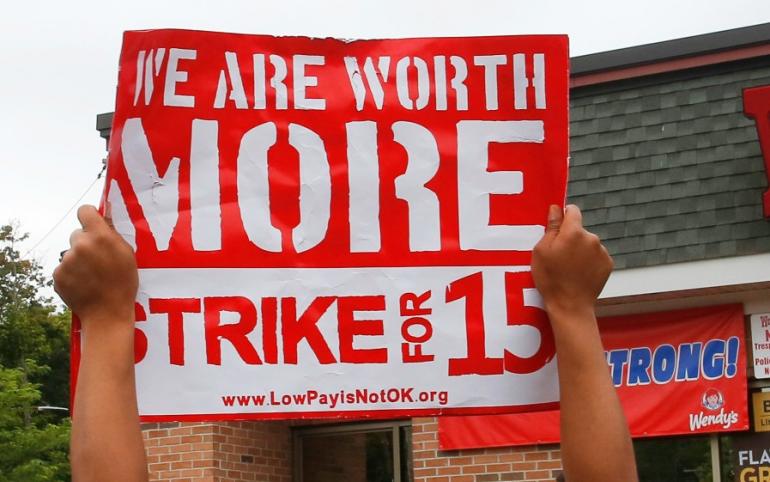 There is debate stirring about a possible minimum wage increase.

Obama and the Democrats in DC are advocating a proposal to raise the minimum wage from $7.25 per hour to $10.10 per hour.

This would actually be an increase in the minimum wage of 39%, which is extraordinarily high, especially given the already high unemployment rate, particularly among less skilled workers.

Overall, the American people are in a state of naivety about the minimum wage, thinking there is such a thing as a free lunch. The majority of Americans, who support not only a minimum wage, but also an increase in the minimum wage, do not understand that there will be negative consequences, or they don’t think they will be affected.

Some Republicans will speak out against raising the minimum wage. You will find fewer who will advocate an elimination of minimum wage laws. We also have to remember that the last time minimum wage legislation was enacted to raise the amount, it was under George W. Bush.

Neither side is consistent, with the occasional exceptions. If the Republicans say that raising the minimum wage will cause higher unemployment, then why wouldn’t they advocate getting rid of it? There are a few who do say that, but not nearly enough.

And if the Democrats think that raising the minimum wage is great and virtually cost free, then why not raise it to $15 per hour or $50 per hour?

The minimum wage simply prevents employment between consenting parties. It doesn’t mandate that someone be hired or that someone can’t be fired. It just means that some transactions won’t take place that otherwise would have.

If someone wants to pay another person $6 per hour to do some manual labor and the other person is willing to do the job at that price, then the government is telling them they are not allowed to enter into such an agreement. If the person willing to pay $6 is not willing to pay $7.25 (maybe soon to be higher), then the transaction will never take place.

Like so many laws, it hurts the people most who it is purported to help. In this case, it tends to be younger people and those with fewer skills. These are the people most likely to lose a job or have more difficulty in finding one.

Ironically, it is legal to hire an unpaid intern in many circumstances. The intern would be willing to work for no pay just to gain experience. But if the company offered to pay the intern $5 an hour, then the transaction all of a sudden becomes illegal.

There was a CBO report just released saying that raising the minimum wage would lead to the loss of half a million jobs by late 2016. But the report also said that it would lift 900,000 people out of poverty, meaning it would push them above the designated poverty line.

Of course, these numbers are meaningless. The CBO has no idea what's going to happen. They can plug their numbers into graphs, charts, and various computer-modeling programs, but it can’t actually tell you how humans will react.

A 39% increase in the minimum wage could easily lead to greater poverty. If there are that many more people unable to find work, we really have no idea how bad the effects could be.

The estimate of 500,000 lost jobs could easily end up much higher than that, too.

Think of a small business with about 20 employees. Half of the workers are making around the minimum wage and the other half are making more, maybe even significantly more.

If the employer simply can’t make a big enough profit paying an extra $2.85 per hour per worker, then the employer might just shut his doors for business. The extra expense might be around $5,000 per month. And if any of the other workers were making around $10 per hour, how would they feel making the same amount as the other people who have less experience or fewer skills?

If the employer shuts down his business, then it would mean all 20 people would be out of a job, not just the minimum wage workers.

It's also important to point out that there are a lot of other hidden effects from minimum wage laws. An increase in the minimum wage may not lead to some people being fired, but it could lead to jobs not being filled or jobs never being created in the first place.

The bottom line is that minimum wage laws are bad economic policy. It will cause higher unemployment, assuming that the mandated wage is not lower than what workers would be paid anyway. It will also cause lower overall productivity and it distorts market activity.

The politicians who push for a higher minimum wage are playing on the economic ignorance of the voting population. Meanwhile, it is only hurting the people it's supposed to help.