Why Oil and Gas Will Rise Again

Enjoy Lower Fuel Prices While You Can

The drop in price is so beneficial to the average consumer that economists are factoring it into their year-end shopping season forecasts.

“The recent decline in gasoline prices has put an additional $50 billion in personal disposable income into the pockets of U.S. households, which should boost spending heading into the holiday shopping season,” measures an October 15th report by McGladrey, a provider of assurance, tax and consulting services.

“The net effect of lower gas prices and added consumer discretionary income should bolster the fortunes of middle market companies in the retail, food, beverages, fashion and home furnishings industries. It may also boost demand for durables and electronics, which would positively affect industrial products and technology sector companies,” the report reveals.

That’s an awful lot of happy shoppers and businesses, thanks to lower oil and gas prices. Who doesn’t like that?

Well, oil producers, for starters. As well as a good many foreign governments whose largest single source of income is derived from oil and gas exports — namely Russia, Iran, Venezuela, Saudi Arabia… the list is long.

The question now is… whose happiness matters most? Oil consumers’ or oil producers’? I’m sure you can guess the answer to that. Enjoy these lower fuel prices while you can, because there are ample reasons to expect they won’t stay down for long.

One indication oil will have to rise soon is that we have a good many unhappy oil producer companies in the U.S. who need a high oil price to cover the high cost of fracking. The only reason for the recent boom in oil production from “tight oil” deposits like the Bakken shale fields of North Dakota and Montana has been the high price of oil. A falling oil price would spell disaster.

“At $90 a barrel and below, many hydraulic-fracturing projects start to become uneconomic, according to a recent report by Goldman Sachs Group Inc,” reports the Wall Street Journal. “While fracking costs run the gamut, producers often break even around $80 to $85.”

“There could be an immense amount of pain,” energy economist Phil Verleger warned. “As prices fall, you will see companies slow down dramatically.”

How much further can oil fall before wells are forced to start going offline?

“A further drop of $4 or $5 a barrel will force companies to begin trimming their capital budgets,” answers Paul Sankey, energy analyst with Wolfe Research LLC. That was October 9th, when oil closed at $85.77 per barrel. By late last week, oil had dropped below $80 before rebounding to $82.75.

Is it a coincidence that oil stopped where it did? At that magic break-even level around $80? Not at all. The stop can be explained by common knowledge among oil traders that oil below $80 is unsustainable and would result in the closure of numerous wells, which would in turn reduce supply and drive the price back up. So investors naturally jumped in at $80 and below, knowing the price simply cannot stay below that for long.

But there’s another reason investors jumped in at that point late last week… the recent plunge in oil prices has made a number of producer countries very unhappy.

A second indication oil will have to rise soon is that we have a good many unhappy oil producer countries, especially those who are at odds with western nations, namely Russia and Iran.

It’s no secret that Iran is still pursuing uranium enrichment which can be used in nuclear weapons, and the West wants it to stop. Meanwhile, Russia still occupies eastern Ukraine and the West wants it to get out. The West already has sanctions against both Iran and Russia, but they haven’t produced the desired results. So what’s next? Hitting them where it really hurts… their pocket books.

Both Russia and Iran are major oil exporters whose economies are heavily reliant on oil revenues. Their economies being as weak as they are, the price of oil needs to be quite high for them to prosper, as noted in the table below depicting the oil price break-even point for a host of oil exporting nations. 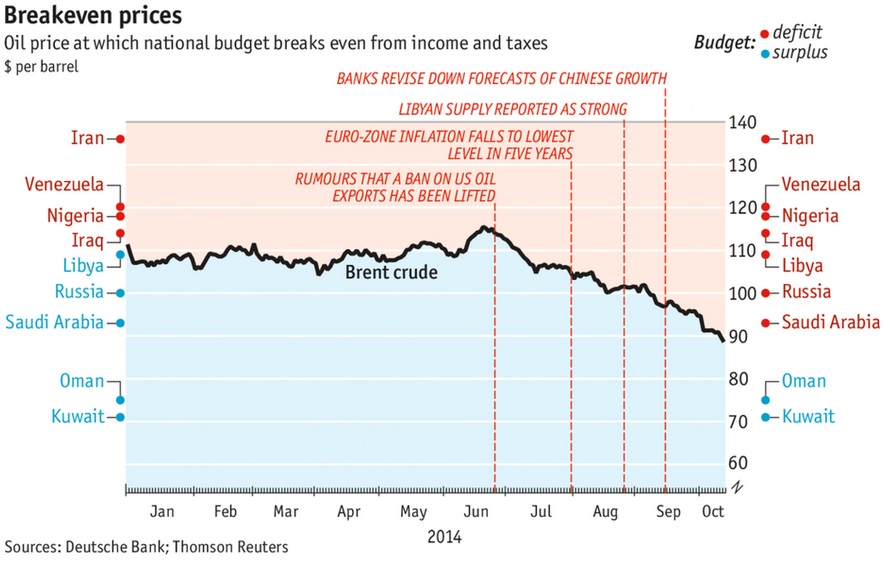 Even before the oil price started plunging at the end of June, Iran was already hurting from oil at $115 per barrel, some $20 below its $135 break-even point. But now at just over $80 a barrel, oil is 40% too low for Iran’s liking. The story is the same for Russia, which needs oil to be above $100 to cover its production costs.

Russia “was already suffering from weak growth,” explains Vox.com. “Now the plunge in global oil prices is putting even further strain on the nation's economy. Oil revenues account for roughly 45 percent of Russia's budget, and the government's spending plans for 2015 had assumed that prices would stay in the $100-per-barrel range. If oil continues to sink below that, the country will either have to draw down from its $74 billion foreign-exchange reserves or cut back on planned spending.”

Is it a coincidence that this recent correction in the oil price since late June was just enough to push Russia out of the blue and into the red? Not if we look at some price charts, namely the U.S. Dollar Index (DXY), the Russian ruble, and the West Texas Intermediate crude oil price as combined below. 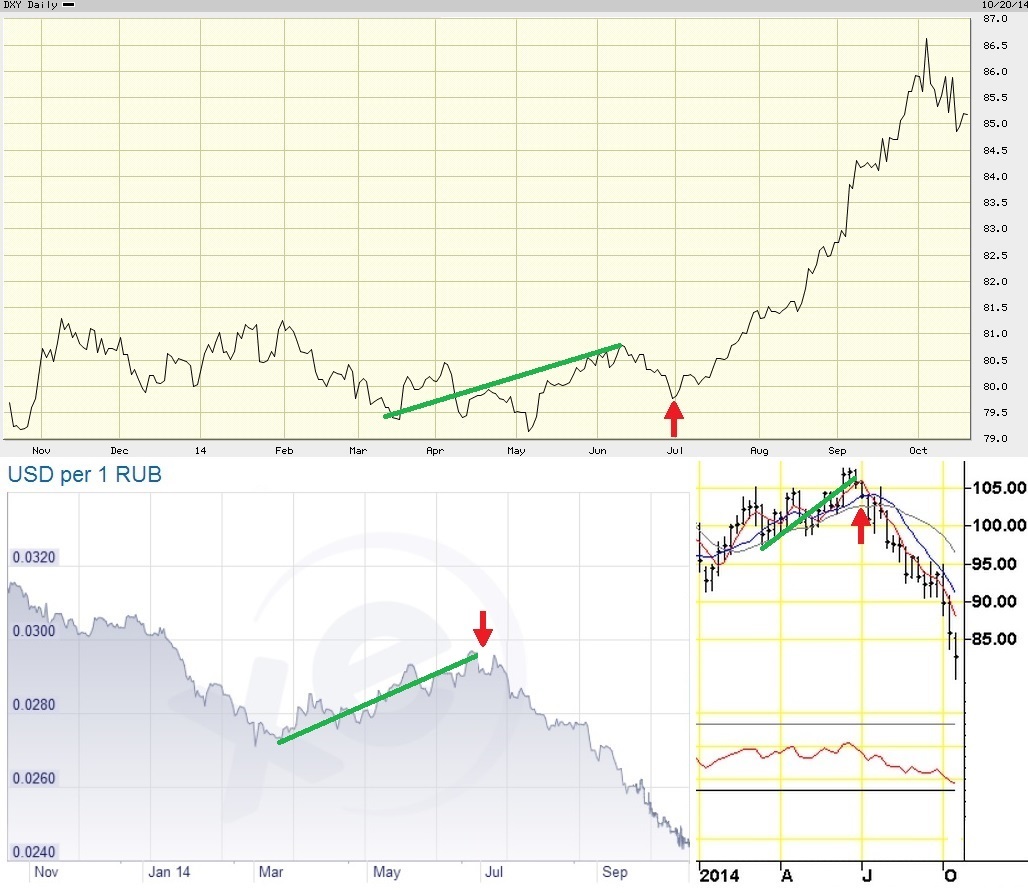 While the West has had sanctions on Russia for some time now since its annexation of the Ukraine province of Crimea, the message wasn’t getting through to Russia’s President Putin. Although sanctions were having a negative impact on Russia’s economy, talks with China gave Putin confidence that there was a ready buyer of Russian oil and gas which would pick-up any slack from sales to the West. The West was getting frustrated, as Putin simply wouldn’t budge on the Ukraine situation, nor on his threats to cut gas sales to Europe.

The West grew even more frustrated when, from early March to late June (green in the graphs above), the U.S. dollar, the Russian ruble, and the crude oil price all rose together. This meant a lot of extra wealth coming Russia’s way. Not only would it be collecting more dollars from oil exports, but the rising value of the dollar would off-set the rising value of the ruble, resulting in a net gain from oil sales.

Now take a look at the red arrows. It was then — at the end of June, beginning of July — that everything started to turn against Putin. Since Russia is primarily a resource-based economy, it imports a great deal of machinery, equipment, and other manufactured and finished goods. As the dollar started rising and the ruble started falling, those imports grew progressively more and more expensive. With the price of oil falling at the same time, Russia now had less export income to pay for the rising cost of imports — double trouble.

Does it really come as a surprise, then, that late last week Putin attended the two-day ASEM summit of European and Asian leaders in Milan, Italy?

“Putin is looking to get relief from Western economic sanctions,” reports ABC News. With the squeeze on Putin finally bearing fruit, it may be likely that the recent low of $79.78 late last week was a bottom for the crude price. You can hear the oil producers in the midwest breathing a collective sigh of relief.

Of course, if you’re not into conspiracies, there is always the more boring “conventional” explanation for the sudden drop in crude oil prices.

“The 14 percent decline in the price of retail gasoline was primarily caused by the 27 percent drop in the global price of oil,” the McGladrey report pin-pointed. “The new supply of oil coming to market in the U.S. [including new oil from fracking sites] is outpacing demand as economies in the euro zone, China and emerging markets cool.”

As economies in Europe and Asia slow, so will the demand for oil; hence the slump in the oil price.

“In addition,” the report continues, “the 10 percent increase in the value of the U.S. dollar against the euro, and the dollar’s 7 percent rise against a trade-weighted basket of global currencies, will likely further dampen overall economic activity in the euro zone and China because the oil is priced in dollars, which increases the total cost of energy and production in those economies.”

In other words, on top of slower growth in Asia and Europe, we also have a stronger USD which makes oil even less affordable for those struggling economies, slowing their growth even more, and in turn lowering the demand for oil even more.

So who’s right? The economists or the conspiracy theorists? We will know in a few weeks simply by looking at the oil price. If the economists are right that slowing global demand is the cause, then oil prices will remain depressed at current levels and below for many months. But if the recent drop was just a tactic to bring Russia and Iran to the negotiation table, then we can expect the oil price to start rebounding upward within weeks if not days. The frackers have a lot of clout, don’t you know.