Which Pot Stock ETF Should You Buy?

If you’ve been following pot stocks for a while, this ETF concept might sound familiar. And that’s because it’s not exactly new at this point.

POTX isn’t the first pot stock ETF — or the second, or even the fifth. It’s actually the tenth to hit the markets and the fourth launch of its kind this year.

Now that these popular funds number in the double digits, it’s getting difficult to tell them apart. After all, the marijuana industry is still relatively young, and many funds contain similar sets of holdings.

Today, we’re going to profile each of the 10 pot stock ETFs on the market today — revealing their holdings, volumes, expense ratios, and more — so you can pick the fund that’s right for you.

MJ is the oldest and largest ETF on the market today. It started trading back in 2015 — an eternity ago in pot stock time — and has $771.72 million in assets under management (AUM) at the time of writing.

The fund’s holdings are a fairly standard mix of growers and medical companies — its top three positions are GW Pharmaceuticals, Cronos Group (TSX: CRON), and Canopy Growth Corp. It has an expense ratio of 0.75%.

MJ currently pays a hefty 4.95% dividend and trades at a 0.19% discount to its net asset value (NAV). 766,431 shares have changed hands in the last month, making MJ the most liquid pot stock ETF.

HMMJ is the second-largest and second-oldest pot stock ETF on the market. It started trading in the spring of 2017 and has $504.98 million in AUM.

Although the ETF’s name implies a medical focus, HMMJ is actually largely invested in Canadian producers of recreational pot. Its top three holdings are Canopy Growth, Cronos, and Aurora Cannabis (TSX: ACB). It charges a relatively high expense ratio of 0.86%.

However, HMMJ pays a whopping 10.71% dividend at the time of writing. It trades for a 0.27% premium to NAV and is one of the more liquid ETFs on this list. 367,305 shares have been traded in the last month.

This ETF’s ticker symbol is a reference to a meme — You Only Live Once, or YOLO — which died out years ago among the general public but lives on in the world of online investment forums as a euphemism for a high-risk, high-return stock purchase.

This marketing strategy has clearly worked to some extent. YOLO is the third-largest pot stock ETF out there, with $47.29 million in AUM as of late October.

Its holdings are slightly less Canadian than most of the other funds here (though it still has a substantial allocation to the Great White North). Its top three positions are Village Farms International (TSX: VFF), Trulieve Cannabis (OTC: TCNNF), and GW Pharmaceuticals. Its expense ratio of 0.74% almost seems like it was chosen specifically to undercut MJ.

This simply named, easy-to-remember ETF currently has $16.66 million in AUM.

It has a cookie-cutter set of holdings; its top three positions are almost identical to those of MJ (but with a smaller Cronos Group allocation and a larger Canopy Growth Corp. position). Its expense ratio of 0.70% makes it cheaper than any of the largest three ETFs.

THCX does not pay a dividend and currently trades at a 0.50% premium to NAV. 40,278 shares have changed hands in the last month.

The only pot stock ETF that trades on the BATS exchange, TOKE is one of the smaller members of the pack, with just $9.81 million in AUM.

It has a fairly typical Canada-heavy set of holdings. MediPharm Labs Corporation (TSX: LABS), Aphria, and GW Pharmaceuticals round out the top three. It has an unusually low expense ratio of 0.42%.

TOKE pays no dividend and currently trades for a 0.42% premium to NAV. Just 9,448 shares have changed hands in the last month.

MJROF is one of two over-the-counter (OTC) pot stock ETFs we will discuss in this article. Its lack of exchange listing makes it somewhat difficult to find information about it, but it is a pot stock ETF that is on the market today, so it goes on this list. It has $8.33 million in AUM.

The fund has an unusual set of holdings. Its top position isn’t actually a marijuana company but rather a Canadian cash-equivalent fund: the Purpose High-Interest Savings ETF (TSX: PSA). OrganiGram Holdings (TSX: OGI) and Curaleaf Holdings (CSE: CURA) round out the top three. MJROF charges a 0.75% expense ratio.

It pays a 3.01% dividend and does not appear to publish information about its discount or premium to NAV or trading volume.

SEED is the smallest Toronto-listed pot stock ETF on this list, with just $6.942 million in AUM.

It has an almost-entirely-Canadian set of holdings, led by Aurora, Canopy Growth, and Charlotte’s Web Holdings (TSX: CWEB). SEED charges a 1.13% expense ratio — the highest on this list.

It pays no dividend and trades for an unusually high 1.22% premium to NAV. Just 2,379 shares have been traded in the last month, making SEED one of the lowest-volume pot stock ETFs.

CNBS is even smaller than TOKE. Its AUM comes to just $5.86 million.

Its holdings are a typical Canadian-oriented mix of pot stocks, with GW Pharma, Canopy Growth, and Canaccord Genuity Group (TSX: CF) as the top three. The fund charges a 0.75% expense ratio.

CNBS pays no dividend and currently trades at a 0.31% premium to NAV. Just 7,800 shares have been traded in the last 30 days.

The newest member of the pot stock ETF pack, POTX has just $3.632 million in AUM at the time of writing. That’s largely a consequence of the fact that it’s only a month old; its AUM will likely grow in the coming months as its well-known issuer attracts more funds.

As we discussed earlier, POTX has a heavily Canadian set of holdings led by GW Pharma, Canopy Growth, and Aphria. It charges a 0.50% expense ratio, making it one of the cheaper funds discussed in this article.

It pays no dividend and currently trades for a 0.77% premium to NAV. It is too young for volume data to be available at the time of writing.

HZEMF is the other OTC pot stock ETF. It’s the smallest of the whole group, with a tiny $3.38 million in AUM. But it has an interesting and unique focus: As its name implies, HZEMF focuses on small, up-and-coming pot producers rather than the big Canadian players.

To that end, it has an unusual and less-recognizable set of holdings that are mostly American companies. The top three are Cresco Labs (OTC: CRLBF), Harvest Health & Recreation (OTC: HRVSF), and Neptune Wellness Solutions (NASDAQ: NEPT). It charges a 0.85% expense ratio.

HZEMF pays a relatively high 4.85% dividend. Premium/discount information is not available for it due to its small size. It’s also the least liquid pot stock ETF — no more than 204 shares have been traded in the last month.

Which One Is the Best Pot Stock ETF?

Different pot stock ETFs excel in different ways — it’s hard to say that one is superior to the others. But for your convenience, we’ll break down the “best in category” list below.

MJ is the biggest, most liquid, and most discounted by NAV. HMMJ pays the highest dividend. And TOKE is the cheapest by expense ratio.

But here’s the disappointing thing about all of the pot stock ETFs: They’ve all had rather abysmal performances as of late. 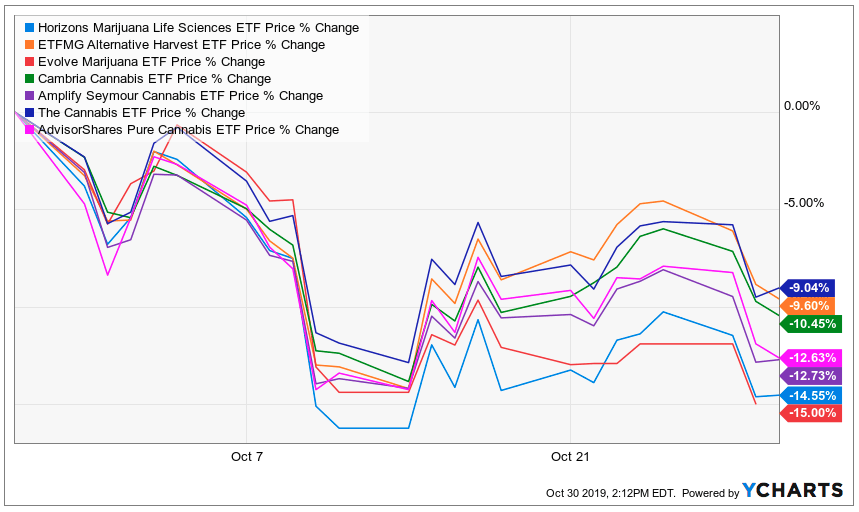 Only seven of the 10 ETFs have extensive enough price histories to be graphed over the course of one month. And as you can see above, the best performer lost more than 9% in October.

Indeed, the broad marijuana industry has been having a tough time for the last couple of years — but that doesn’t mean every pot stock is doing poorly. In fact, there’s incredible value to be found in certain standout marijuana companies — if you know where to look.

Angel Investment Research analyst Alex Koyfman recently completed a comprehensive report about one such marijuana value stock. This small firm trades for just a couple of dollars a share, but it has a wide moat and incredible growth prospects that could help it lead the pot stock recovery. Read more here.