What Will the "Super Battery" Mean for a $100 Billion Market?

The question I often get asked is, "What's going to be this year's hot new story?"

It's a cliché, but I can sort of see where people are coming from when they choose that phrasing.

Over the last couple years, irrationally bullish new trends seem to have been arriving on an annual basis.

One year it's drones, the next, cryptocurrencies and all things blockchain-related, the next, cannabis.

It's only natural to want to know the magical word or phrase that, applied properly, could mean fabulous gains within a breathtakingly short hold time.

The problem is, the question is also tragically shortsighted.

With every meteoric rise comes equally dramatic collapse. Just look at the crypto market over the last two years.

And how about cannabis?

It's always fun to imagine perfectly nailing the beginning of a trend like either of these examples, but unfortunately, you're more likely going to be buying at the end of the bullish phase or, just as likely, at the start of the bearish phase.

For the Real Riches, Look Beneath the Surface

So when people ask me this question, I usually try to change the subject.

Forget about "what's going to be this year's hot new story" and refocus your mind on what's already emerged as the most important trend of the next decade.

It may not be on the tongues of all the talking heads on TV, but it's going to outlast and out-earn all the momentary investment fads put together.

Let me give you a bit of background.

Among all the amazing, helpful, and world-changing new products out there today, from smartphones to electric cars, one technology is universally essential...

They're in your smartwatch; they're at the heart of every electric vehicle on the road; they give life to all your portable devices; they power high-speed trains and store excess energy produced by residential solar panels and commercial wind farms.

This is a market that has been quietly growing for the last few years, but in the next few years, it is finally expected to hit the vertical growth that everyone asking the question of "What's going to be this year's hot new story?" wants to see. 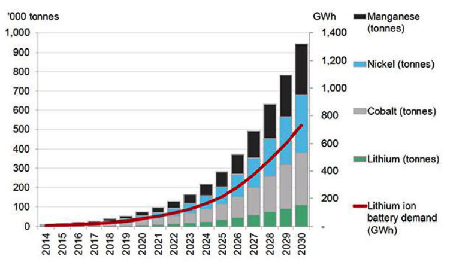 And mind you, this isn't growth in terms of total market capitalization; this is growth in terms of demand for the raw materials — which means it's not just the product of investor emotion but a concrete, precisely defined variable.

The reason behind this slow, gradual ascent is as simple as it gets: The market is too big and too diverse to explode overnight.

In terms of an investment, it's also not as sexy as, say, a new, mysterious currency or everyone's favorite illegal plant finally showing up for sale in your local 7-11. But on a practical, down-to-earth basis, it's by far the most important long-term industrial trend emerging today.

In the world of tomorrow — and I don't mean in 30 years but in the next five, maybe eight — the bulk of the machines you see on a day-to-day basis will be powered by lithium batteries.

The Main Driving Force Behind the Lithium Battery Market

Lithium already has a monopoly on the small devices, but it's the large ones that will make the most significant impact in the coming years.

Cars, trains, even aircraft will all be transitioning from internal combustion to electric motors and lithium batteries.

The lithium-ion battery market is already expected to break the $90 billion mark globally by the year 2025.

As the transportation sector starts to play an increasing role, growth in lithium battery demand will get the push it needs to maintain that rate for at least another five after that. 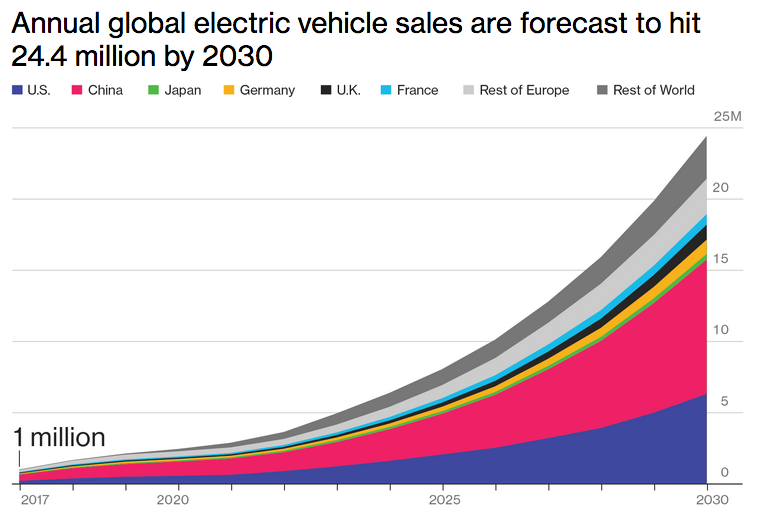 That means lithium-ion battery producers are going to be working overtime to fill all that demand.

In fact, they already are.

Daimler, parent of the Mercedes-Benz brand, announced this past November that it intends to spend $22 billion on lithium batteries in the next 11 years and expects as much as a quarter of its production line to be electric by 2025.

Volkswagen has already secured $25 billion worth of battery supplies and plans to spend about $25 billion more as it refits 16 of its factories to turn out EVs.

Elon Musk built the biggest, most expensive factory in the world just to keep all of his customers happily supplied.

He now plans to build between 10 and 12 more just like it.

But the real opportunity this presents isn't to the makers... It's to the companies that innovate on the existing product.

With the race for the highest capacity, the shortest charge time, and the longest service life now in full swing, companies making even incremental improvements to the battery will inevitably be at the center of attention — both for their patents and for their shares.

Several weeks ago, I found a company that I believe may have taken this to the next level.

In the Most Competitive Sectors, the Smallest Improvements Matter

I'm not talking about incremental improvements here, but a dramatic, multilevel evolution that will give us a vastly better battery, while at the same time making the production process simpler, more efficient, and less taxing on the environment.

This revolutionary new process dramatically reduces the number of required steps, as compared to current industry standards, taking the production cycle down from as long as a week to less than a day.

The end result: a battery that can last two to three times longer, store more energy over its lifetime, and deliver more power, while reducing operational and raw materials costs, with an overall decrease in production overhead of up to 40%.

This will be an enormous benefit to the entire spectrum of products relying on lithium-ion technology.

Electric vehicles will be able to go farther using smaller, lighter battery packs, while saving money in both production and maintenance.

The same goes for distributed energy storage systems like the Powerwall, as well as for larger industrial power storage arrays.

The limit of the applications is defined only by the limit of devices and machines that rely on lithium batteries — a list that expands every year.

You'd think this would make shareholders happy, but guess what? They decided to file a lawsuit to block the acquisition.

Why? Because even with that 56% markup, they think their company is worth far more than Tesla is offering.

That's how competitive the market is right now.

The company I've been talking about has more than 40 patents at various stages of issue, funding from the Canadian government, and collaborative product development deals with a major French multinational, as well as a Chinese cathode producer.

In a climate where the big brand names are scooping up smaller companies with innovative new products, this hits all the desired check marks.

That's good news for current shareholders because this company's market capitalization, despite all its achievements, is still under $100 million.

This will not last for long, however.

The intellectual property rights alone are arguably worth far more than the current share price implies. Add to that the joint development agreements to push the innovations into the market faster, and we could be looking at order of magnitude growth inside of a few years.

So never mind the flash-in-the-pan investment craze of this year. In all honesty, whatever that craze is, if you're not bought up yet, you're already probably too late.

A much bigger, more substantial industrial movement is underway, and it's only getting warmed up.

There's a lot more to say about this company, so I decided to assemble all the relevant data into a single report.

Click here to find out how you can get your copy of this report today.

Coming to us from an already impressive career as an independent trader and private investor, Alex's specialty is in the often misunderstood but highly profitable development-stage microcap sector. Focusing on young, aggressive, innovative biotech and technology firms from the U.S. and Canada, Alex has built a track record most Wall Street hedge funders would envy. Alex contributes his thoughts and insights regularly to Wealth Daily. To learn more about Alex, click here.

Musk Makes Big Claims. Still Destined to Fail
You know things are getting interesting over at Tesla (NASDAQ: TSLA) when front man Elon Musk starts making big, thought-provoking public statements. This week, at least two such statements came barreling from the CEO's Twitter account. But it still won't protect the company from what's coming...
Tesla Buys Battery Maker for 50% Markup... This One Could Be Next
Tesla Inc. just bought a small battery maker, signaling that a far more important acquisition may be imminent. Wealth Daily editor Alex Koyfman discusses what this could mean...
Negative Emissions: The Next Big Profit Ground for Green Tech
Renewable energy is failing to reduce carbon emissions, and governments around the world are turning to a new kind of tech. Wealth Daily editor Jason Stutman discusses this tech inside...
Buffett's Envy: 50% Annual Returns, Guaranteed
Warren Buffett once told investors at an annual shareholder meeting, "...it's a huge structural advantage not to have a lot of money. I think I could make you 50% a year on $1 million. No, I know I could. I guarantee that."