Now, you can't just say this guy is lying. It's a forecast... 10 years out... there's gonna be inflation... and maybe Tesla's selling diamond studded cars by then...

Besides, I'm pretty sure the Constitution protects our right to make wingnut forecasts — which it should. Cuz where would America be without wingnuts? Seriously, we are a nation of wingnuts. We take on ridiculously lofty goals and make them real.

See that stupid rock a million miles out in space? Watch this, I'm gonna go stand on it, hold my beer...

Other countries can add all the STEM curriculum and violin lessons they want. That's not what this is about. The U.S. will still have the most innovators, the most people with vision, and the actual against-all-odds belief that they can make it happen.

It's because we nurture our inner wingnut. We are batshit crazy, and it is awesome.

Maybe I should put it like this: During this coronavirus outbreak, there was this video of police drones flying around China. One flies up to this old lady and scolds her, tells her she should have a mask on and that she needs to get back inside. She quickly scurries off...

Can you imagine that scene happening in an American city? A drone flies up to some lady here and starts to tell her what to do, she's gonna knock it out of the air with a stick and go about her business. That's how we roll in the US of A!

Anyway, I'll take the other side of that Tesla bet. I'll tell you straight out: There is no way Tesla is ever pulling down $1 trillion in annual revenue, unless we're talking Confederate dollars. Go ahead, call me crazy. I'll take it as a compliment.

At this point, I need to highlight the fine line between wingnut and plain stupid. As of yesterday, Tesla stock was up $300... this week! Elon Musk and any investors that are still (?) holding shares after this mind-boggling run are textbook wingnuts.

But being short Tesla shares? Actively betting that the stock will go down? That's just stupid and dumb... 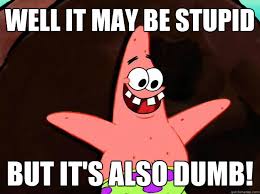 We have an ongoing debate here at Angel about whether Tesla is a true powerhouse company that is changing the world or whether it's a circus led by a carnival barker.

I told you what I thought a couple weeks back in an article called "Great Company, Bad Stock":

Ford and GM are better companies in just about every way you can think of. They sell way more cars, take in more revenue, earn more profits, pay very nice dividends, have been hitting sales records for like five years running, and both sell electric and hybrid vehicles. Yet, investors will tell you that Tesla is more valuable... [and] the market remains steadfast: Tesla is the better stock.

Huh, whaddya know, nailed it. Coulda made a lotta loot, too. At this point, Tesla is a cult stock. There's nothing rational about any of this. It's all belief. Either you believe Tesla is the future, or you believe it is a fraud.

For this run, the numbers for Tesla's business do not matter one bit. Revenue, production, profits — irrelevant.

But there are some numbers that do matter here: 13 million, 27 million, 25 million, and 140 million for starters.

The Short Squeeze of the Century

If you don't know, when you sell a stock short, you actually borrow the stock from somebody else and sell it for whatever the market price is. At some point, you will have to actually buy the stock to replace what you borrowed. The idea here is the same as "regular" investing: buy low, sell high.

I expect the investors that had sold 27 million shares of Tesla short as of December 13 probably felt pretty confident that they would be able to buy shares to replace the ones they borrowed somewhere below $350. That was the high for Tesla to date. And we've pointed out repeatedly that even $500 was a pretty outrageous price, valuing the company at around $70 billion.

By January 15, only 2 million of those shares had been covered. Tesla stock had rallied to $518, and there were still 25 million shares of stock that needed to be covered.

Now I get it: You have to have some ego to pound the table about a trade when you think you're right. You gotta be able to channel your inner wingnut. But there's an old saying that the market can stay irrational longer than you can stay solvent. And there are a bunch of investors who have learned that lesson the hard way over the last few days.

Friday, it closed at $650. Shorts said, "Oh, people will come to their senses over the weekend. Maybe I'll short a little more..."

The thing about a short sale is that it often involves margin. Your broker will essentially lend you some money if the trade goes against you. But if you hit your margin limit, you have a choice: You can add cash to cover the increased margin expense, or your broker will start liquidating.

Yeah. It can be bad. This margin call thing happened to me when I was a trading greenhorn and I can tell you firsthand: All you want is for the pain to stop.

Sadly, sometimes it's a good idea to rein in your inner wingnut, or you'll be chasing bitcoin or weed stocks or whatever the latest mania is. Sometimes, it's best to just sit back and watch.