What the End of Prohibition Can Teach Us About Pot Stocks

The alcohol industry is one of the largest in the United States. It was worth roughly $240 billion in 2018. And that number is even more staggering when you consider that some Americans alive today were born at a time when booze was illegal nationwide.

Given that drinkable alcohol was only available on the black market in the 1920s — and that it’s almost a quarter-trillion-dollar industry today — you’d think alcohol stocks must have shot up when Prohibition was repealed in December of 1933, right?

You’d actually be wrong. A couple months ago, Barron’s reporter Al Root dug through old newspaper archives and assembled a stock price chart of legal alcohol producers in the early 1930s. As you can see below, booze stocks surged in the years before the repeal of Prohibition, but they actually sold off when it happened. 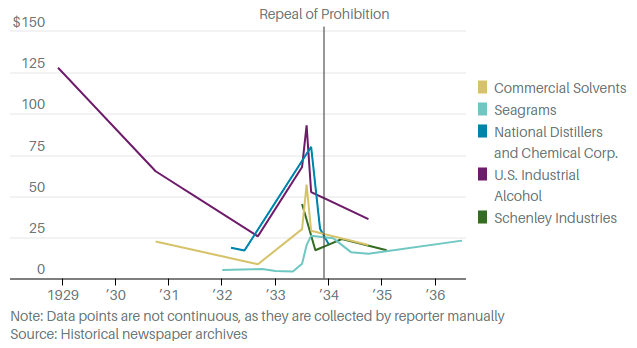 Now, I’m going to show you a second chart, this one of my own making. 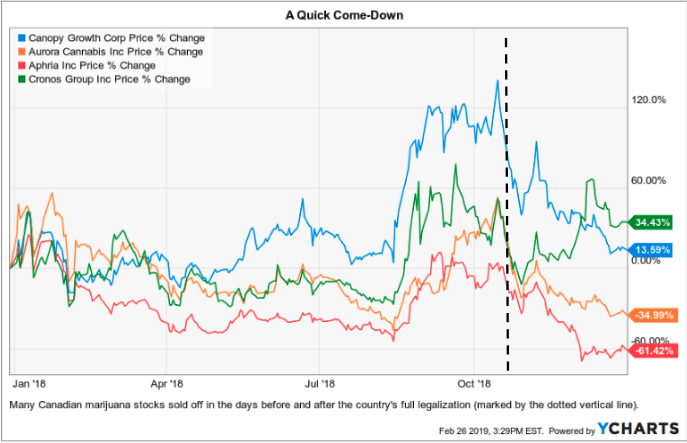 Hopefully you see the pattern at this point. When a country moves toward legalizing a substance, there’s often a speculative run-up in the stock prices of producers of that substance.

But then when that country actually follows through on legalization, people realize the producers’ stocks are overbought, and they sell them in droves.

My point is not that marijuana stocks are a bad investment. Quite the opposite, actually.

Remember, booze stocks sold off as Prohibition was ending, but they’ve since recovered and grown into an industry worth hundreds of billions of dollars.

I believe we’ll see the same thing happen to the legal marijuana industry in the coming years.

We’ve already seen a “legalization sell-off” around the end of marijuana prohibition in Canada and several U.S. states. And the industry is still expected to be worth almost $150 billion by 2025 according to Grand View Research.

What Causes an End-of-Prohibition Sell-off?

To get the answers, we need to consider another question: Why does the legalization of a substance tend to cause a stock sell-off for producers of that substance?

History suggests that the main cause is too much hype. Back in the 1930s, investors were right to forecast that the legal alcohol market would be worth billions someday. But they were wrong about how fast it would grow to that size.

The Wall Street Journal and Fortune both ran op-eds in late 1933 expressing concerns that the value of the soon-to-be-legalized alcohol industry was already overinflated, and these concerns were vindicated by the ensuing sell-off.

This hype problem seems to be repeating itself today with marijuana. In early October 2018, Canopy Growth Corp. founder Bruce Linton infamously told CNBC’s Jim Cramer that the industry could be worth $500 billion in a few years.

That’s the entire current value of the global marijuana black market, plus a portion of the global alcohol, cigarette, and pharmaceutical markets. Markets felt that Linton was predicting an unrealistic amount of growth in the span of a few years; Canopy shares started dropping on the day of that interview.

If excess hype is the main cause of these kinds of sell-offs, then we can assume the best time to buy the dip is when the hype dissipates.

Instead of buying pot stocks when there are headlines full of big, hypothetical numbers, investors should buy when marijuana companies are posting real results (revenues, earnings, contracts, etc.) that aren’t plastered all over the news.

Last Chance to Buy the Dip in Pot Stocks?

A few under-the-radar marijuana companies may have already reached that point.

But neither of these opportunities is quite as exciting as the obscure producer Penny Stock Millionaire director Alex Koyfman has been tracking.

Despite having no name recognition and trading for under $1, this emerging marijuana powerhouse is already inking contracts in multiple countries, harvesting thousands of acres of crops, and buying up cannabis product distribution rights around the world. Click here to learn more.