What Is Institutional Support for a Stock?

So you may have heard the term "institutional support." As in, some fund manager says their favorite stock enjoys great institutional support, as if that's supposed to be a good thing. And for the most part, it is. Because the institutions in question are mutual and pension funds. They tend to be long-term holders of stock. And when you get long-term investors that own more than half the shares of a company, there are a few things you can mostly count on...

One, these funds are not going to be panic sellers on quarterly earnings reports. You've seen it: A company reports bad numbers and the shares totally tank. Not to say that a stock with strong institutional support won't sell off on bad news. Of course it will. But the selling will tend to be less severe and end more quickly than if it were totally in the hands of retail investors.

Two, institutional support means there will be somewhat consistent buying pressure in a stock. Big funds tend to keep their allocations the same. Which means if their holdings of a stock make up 3% of the fund, it will generally stay that way. So as the fund takes in new money, that cash gets distributed among stocks it already owns.

Three, big funds usually have to get beaten over the head with fundamentally bad news about a company before they make wholesale changes to their holdings. Look at a stock like GE. Total dumpster fire for several years before the big owners started to throw in the towel. And it wasn't until even the towel went up in flames that they fully bailed.

Is It Just You, or Is Your Whole Family Dumb?

It's tempting to say that a fund manager's blind devotion to a stock is a sign of being, well, unsmart. But it's not so simple. The most money is always made by doing nothing. That is, the longer you hold a stock in a company, the more money you will make. Especially if that company is growing its dividend.

Don't forget, Warren Buffett makes what amounts to two-thirds of his initial investment in Coca-Cola every year when Coke pays a dividend. In other words, Buffett is currently getting a 65% yield from Coca-Cola. What has to happen for him to say, "Yeah, I don't want that essentially free cash anymore"? How bad do things have to get? 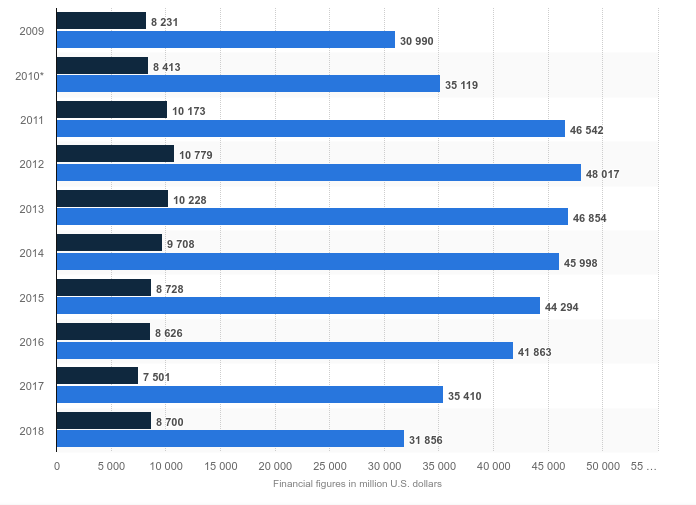 (The light blue lines are revenue, and the dark are earnings per share.)

How many investors are really saying, "Oooo baby, get me some of that action, STAT!!"

In any event, that's what you call institutional support.

The reason I bring all this up is two-fold. In the big picture, I want to show you how the stocks that big funds own aren't necessarily the best for the individual investor. It doesn't mean they are bad stocks, just that the goals of the fund may well be very different from your goals.

The other reason is that I really, really want to talk about another stock that has strong institutional support: Boeing (NYSE: BA).

The Case with Boeing

I'm sure you know the basic story with Boeing. To improve fuel efficiency and take advantage of huge potential as airline fleets expanded, they moved the location of the engines for the new 737 MAX.

As you might guess, moving the engines changed the way the plane performs. And Boeing didn't want to call the 737 MAX a new plane because that means years of testing. So it devised a software fix to offset the change in performance of the new/not-new plane.

Two planes crashed in a span of five months, killing 346 people. Planes are grounded, production is virtually halted, and the deadline for getting the planes back in the air for 2020 scheduling is pretty much upon us. At some point soon, Southwest et al. will have no choice but move on for the next year.

In fact, most airlines already have schedules up for spring travel.

For Boeing, this likely means a big change in deliveries, earnings, and perhaps even sales numbers. Plus there could be order cancellations. And yet the stock price is less than 25% off its highs... 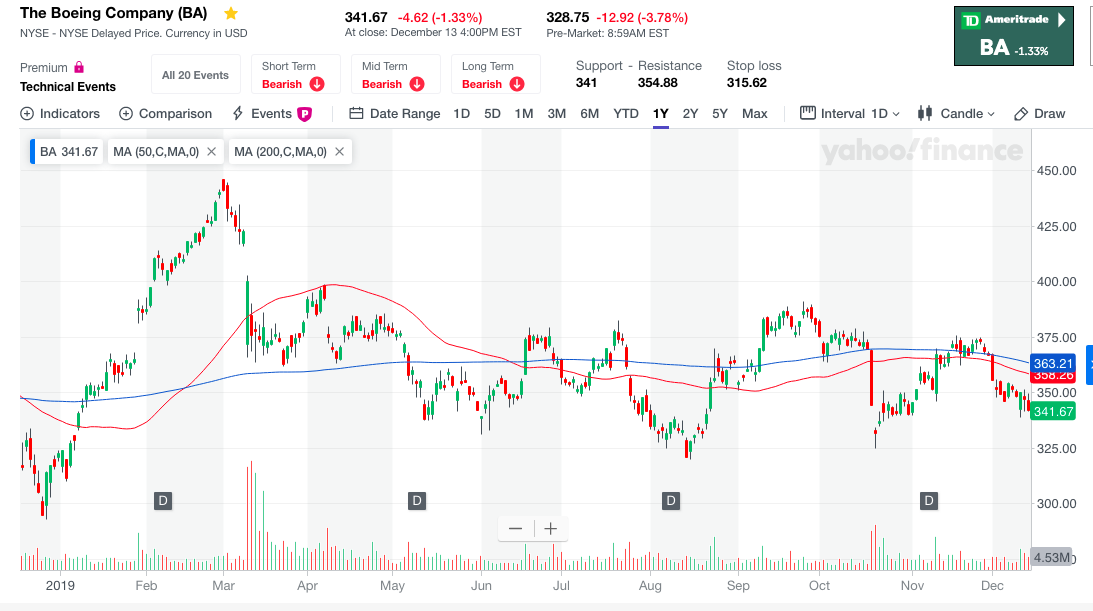 As you can see from this chart, there are obvious price points where the buyers step in. These buyers are not you and me. This is institutional support.

Now, there's a quirk with the way Boeing is allowed to account for the revenue profit generated by the life cycle of a line of airplanes. As in, Boeing's been making 737s since the late 1960s. And needless to say, profit margins go up as the company gets better at building the plane. Parts get cheaper, too. So the profit picture changes dramatically over time...

That's why Boeing is allowed to estimate profits over the lifetime of a plane and then dole those profits out every three months, as it sees fit. Ultimately, this means Boeing can report huge profits anytime it wants.

Over the last year, Boeing's earnings have been pretty much in line with estimates. I find it very hard to believe that Boeing has simply not had any revenue/profit issues related to the grounding of the 737 MAX.

Rather, it has been using its special accounting methods to make it seem like the groundings are no big whoop.

Institutions know this. They know Boeing has some time — maybe even a couple years — where it can gloss over earnings issues while it works to get the MAX back in the air. So they know they don't have to panic sell. And really, they should be buying the dips because the life cycle of the MAX will be strong...

But there's no guarantee here. As I told you earlier, Boeing avoided having the MAX declared a new plane. That was clearly a mistake that cost 346 lives. So if Boeing has to backtrack and call the MAX a new plane, that changes the calculus. We may yet see some panic selling as institutional support caves in.

Interesting: Just this morning, it's reported that Boeing is considering halting production of the 737 MAX. Ouch. Institutions: get your sell orders ready.

Everything You Need to Know About the GE Fraud Claims
Earlier this month, claims of massive accounting improprieties at General Electric roiled markets. Today, Wealth Daily correspondent Samuel Taube is going over everything you need to know about the GE fraud claims.
Is Boeing’s Stock Fiery Wreckage or a Phoenix Rising?
After a second 737 MAX 8 crash, Boeing's stock is in trouble. But is this the beginning of the end or an opportunity to buy? Jason Williams gives his take...
Buffett's Envy: 50% Annual Returns, Guaranteed
Warren Buffett once told investors at an annual shareholder meeting, "...it's a huge structural advantage not to have a lot of money. I think I could make you 50% a year on $1 million. No, I know I could. I guarantee that."