What Is a Backdoor Roth IRA, and Should You Open One?

It’s hard to think of a bigger freebie in the U.S. tax code than the Roth IRA. It’s arguably the most powerful tax shelter available to those of us who aren’t wealthy or connected enough to be stashing millions in offshore bank accounts.

Roth IRAs help you stiff the IRS in a simple, straightforward way. Your contributions aren’t tax-deductible; you pay taxes on that money up front (like you do with any other income). But then you never pay any kind of taxes on the balance again.

No income taxes upon withdrawal. No capital gains taxes. Nothing.

And unlike traditional IRAs, Roth accounts don’t mandate required minimum distributions (RMDs) after age 70.5. They don’t even penalize you for withdrawing a portion of your principal before you hit retirement age.

Given all these advantages, it’s a shame that a significant number of middle-class Americans are barred from participating in a Roth IRA due to their income or marital status.

Roth contribution limits start decreasing when you have a mean adjusted gross income (MAGI) above $122,000, and contributions are forbidden entirely if your MAGI is above $137,000. For married couples filing jointly, those MAGI limits are $193,000 and $203,000, respectively.

And married taxpayers who live together but are filing separately must have a MAGI below $10,000 to contribute at all.

Confused? Me too. Here’s a table from the IRS website that clarifies the Roth IRA eligibility criteria: 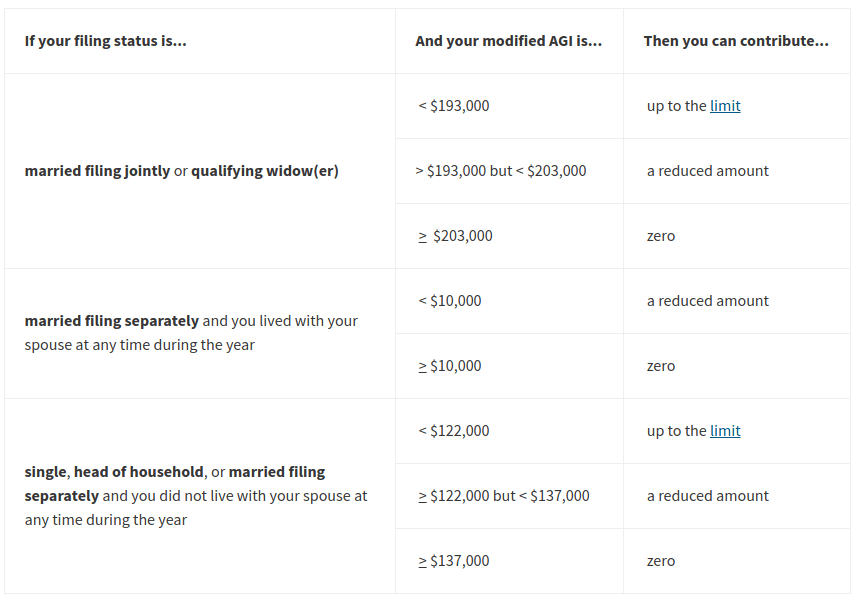 Fortunately, there’s one IRS-approved loophole that lets you bypass these complicated restrictions: the backdoor Roth IRA.

What Is a Backdoor Roth IRA?

Opening a backdoor Roth IRA means opening and funding a 401(k) or IRA, then converting it into a Roth IRA and paying any taxes associated with the conversion.

It’s a complicated process that sometimes costs a bit of money, but it’s the only way for otherwise ineligible taxpayers to enter the Roth IRA promised land.

How to Open a Backdoor Roth IRA

A backdoor Roth IRA can start with a traditional IRA, a non-deductible IRA, or a traditional 401(k), and the process is slightly different for each of these accounts.

If you’re starting with a traditional IRA, you’ll simply contribute as much as you can to the account (up to the $6,000 annual maximum, or $7,000 if you’re over 50). Then you’ll roll it over into a Roth IRA and pay income tax on the previously tax-deductible contributions.

A non-deductible IRA, as the name implies, is basically a traditional IRA that doesn’t allow you to deduct your contributions from your taxes.

Most people don’t have much use for non-deductible IRAs, but they actually simplify the backdoor Roth IRA process by eliminating the income tax payment required by traditional-IRA-to-backdoor-Roth-IRA rollovers.

Traditional 401(k) accounts have some unique features that make them especially useful as starting points for backdoor Roth IRAs.

For one thing, they have much higher contribution limits. Traditional 401(k)s let you contribute up to $19,000 per year in pre-tax dollars ($25,000 if you’re over 50). And that limit doesn’t include matching contributions from your employer.

This example diagram from Manage Your Monies helps break down this kind of rollover, which is sometimes called the “mega backdoor Roth IRA” strategy. 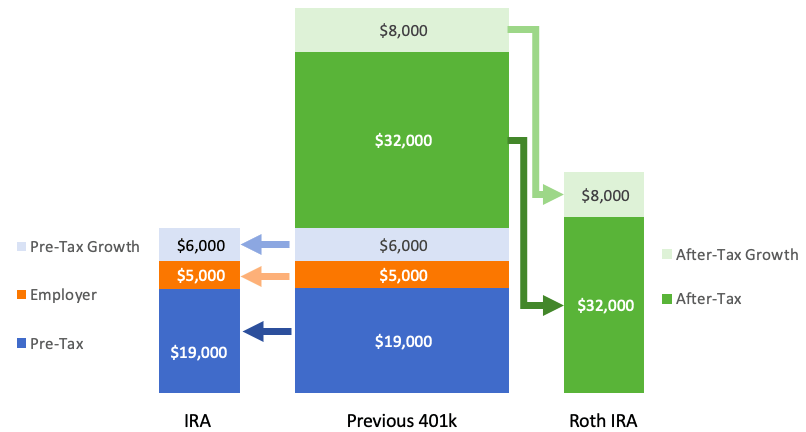 If your employer’s traditional 401(k) doesn’t allow for post-tax contributions, however, you’ll have to roll the whole balance over into a Roth IRA and pay income taxes on the previously tax-deductible contributions.

No matter which of these strategies you choose, it’s important to remember that opening a backdoor Roth IRA doesn’t give you the right to make Roth contributions. The income and marital restrictions will still apply.

So if you want to add more money to your backdoor Roth IRA after the rollover, you’ll have to wait a year, open a new traditional or non-deductible retirement account, and go through the entire process again.

It’s also worth noting that if you start this process with a traditional IRA or 401(k) and you roll pre-tax contributions into a Roth IRA, those contributions are counted as income for the year in which the rollover takes place. If you’re rolling over a substantial amount of money, you could end up in a higher income tax bracket, so plan accordingly.

The backdoor Roth IRA process isn’t exactly simple, and unless you can make post-tax contributions to an IRA or 401(k), it might land you an additional tax bill. But for many people, being able to open a Roth IRA is well worth the time and money.

These incredible accounts can help you save money for a tax-free retirement, put a down payment on a house, and more. It’s a smart move to put up with a bit of bureaucratic hassle for the sake of a brighter financial future.