What Gold Will Do After the Election

Seven Reasons Gold Will Go Up

It's Election Day. Time to go out and vote.

Or better yet, tell them you are going to vote — and go to a movie instead. It will be more productive.

From where I sit, the election is a coin toss, both in terms of who will win and what they will do with the power when they get there. I don't hear anyone saying they will pay down the deficit or cut the size of government.

It's easier to predict where the market will go. I expect the S&P 500 will rally based on more political certainty of the next four years, then sell off as the market turns its attention to more political deadlock and the looming fiscal cliff. 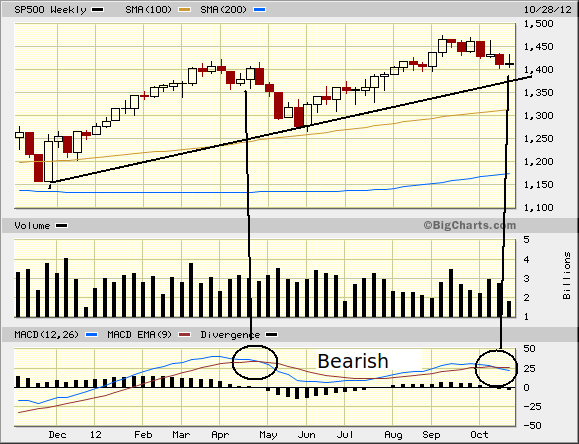 There is also a MACD crossover well above the zero line. The last time this happened, the market sold off about 10%.

But what of gold? What will the election do for the malleable metal?

Call In the Experts

The seers at Deutsche Bank called for gold to go past $2,200 an ounce next year. They think it will go up due to excessive money printing by those fools at the central bank.

The Deutsche Bankers wrote: "While we have targeted gold prices moving above $2,000/oz. since the beginning of 2011, we believe the Fed's open-ended program of QE announced last month increases our confidence that a surge in the gold price above this level is only a matter of time."

I value their wisdom for what I paid for it, which was nothing. My grandmother would say, “What do you expect? You get what you pay for” — and she would be right.

In a like mind, I too am here to offer my wit and wisdom absolutely gratis to all and sundry.

Perhaps some facts will make you feel better...

It is where gold will be next year that's in dispute.

For the record, I believe gold will go much higher from here. The bubble hasn't even started to inflate. When the run happens — just like with dot-com stocks two years ago and housing five years ago — the prices people pay will seem surreal.

But I expect you won't take my word for it, nor the experts' at the leading investment banks. After all, it was these guys who got us here.

So I decided to ask Mr. Jones what he thought...

Mr. Jones and You

Mr. Jones is the man who shows up at the office once a week to mop the floors and clean the bathrooms.

When dealing with the man, there is no jibberjabber about basis points or lipper averages. No sir, nothing of the sort.

The good thing about him is you know where your money goes: With Mr. Jones, the floor becomes clean. The overflowing trash can with its sticky lunch wrappers and odoriferous vapors empties. One can fill it up again!

Oh yes, Mr Jones is a very worthy sort, but not one to give his opinion freely. I had to ask him.

“Mr. Jones, where do you see the price of gold?”

“Well, I don't know exactly, but it should go up. Everything else is.”

I continued to badger him, “Why do you think it will go up, Mr. Jones?”

“Well, since you asked,” he replied, “there are seven reasons gold will increase in value...”

He leaned his mop in the crook of his elbow and proceeded to tick off his points, starting with his right index finger against his left pinkie:

I nodded my head as he splashed his dirty swab back into the yellow bucket and wheeled it squeaking down the hall.

Not knowing much about point #7, the Sound Dollar Act, I did some Internet searching and found this from Forbes:

The Republican Party, with a dramatic nod to the gold standard, adopted a platform plank calling for a monetary reform commission. The Chairman of the Republican Study Committee, Rep. Jim Jordan, already had been calling for monetary reform as one of his five major economic growth planks. The Vice Chairman of the Joint Economic Committee, Rep. Kevin Brady, is readying his Sound Dollar Act, redirecting the Fed from its discretionary activism — not calling for the gold standard but with a heavy deference to the price of gold — for a fast start in the next Congress.

We can only hope.

Time for some takeout.