That's simply because silver costs a small fraction of gold, yet it has the ability to deliver investors much larger gains during bull markets.

In certain instances when gold prices have doubled, the price of silver has tripled... quadrupled... and even outperformed gold by a factor of more than six-to-one!

For over 6,000 years, silver has been regarded as a form of money and as a store of value. In fact the words for silver and money are the same in at least 14 different world languages.

As an investment, silver remains one of my favorite vehicles for wealth preservation and accumulation.

Continuing global economic uncertainty is rapidly increasing silver's appeal as a precious metal. And as a result, the white metal is quickly becoming the investment choice for those who recognize its traditional role as a safe haven asset.

While industrial and fabrication demand for silver has recently been impacted by a weak-kneed global economy, an increase in silver investment demand can be expected to continue in the near term to drive prices much higher.

The price of silver averaged $14.67 an ounce last year. This was the second highest average for silver prices since the 1980.

Much of last year's strength in silver prices can be attributed to soaring demand for silver exchange-traded funds. Total silver ETF inflows increased 50% in 2009 to nearly 400 million ounces as new funds were launched in Australia and the United States.

The world's largest silver-backed exchange-traded fund, iShares Silver Trust (NYSE: SLV), increased its holdings by 40% to over 300 million ounces last year. The fund has increased silver holdings 1,318% since the ETF was launched in April 2006.

For 2010, experts see silver ETFs continuing to add to holdings.

Silver coins and medals fabrication also increased by an impressive 21% to post a new record of 78.7 million ounces last year, mainly driven by a jump in retail demand in the United States. 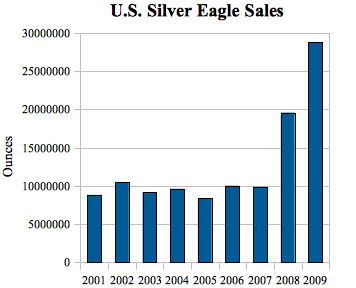 For the month of May this year, the U.S. Mint sold 3.6 million Silver Eagles — the highest monthly sales since 1986, worth approximately $67 million. May marks the third month so far in 2010 that Silver Eagle sales have topped 3 million units.

Overall, implied net silver investment increased by a staggering 184% to 137 million ounces in 2009 compared to the previous year, recording its highest level in the past 20 years. 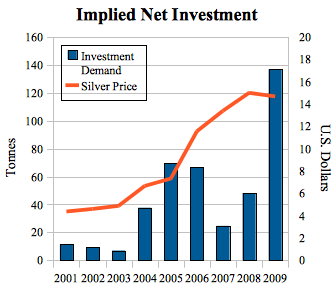 Silver is quickly becoming the preferred investment to safeguard against a fragile global economy. And as investment demand continues to grow, silver prices will march higher. The time to invest in silver is now.

The 3 best ways to invest in silver now

The simplest and most direct way to invest in silver is to own the physical metal.

Silver bars vary in weight from one ounce to over 1,000 ounces. There are approximately 100 active silver refiners around the world whose bars have earned "good delivery" status from one or more of the associations and exchanges. Well-known brands include Engelhard and Johnson Matthey.

Silver coins are another popular way to invest in silver bullion. Many countries — including the United States, Canada, Austria, and Mexico — mint official legal tender silver coins with .999 purity, such as the U.S. Silver Eagle.

Both silver bars and silver coins are priced according to their weight and purity, but they always carry a premium above spot silver prices. I recommend buying silver bars because the premiums are always lower than coins.

Instead of owning the physical metal outright, silver can be bought in the form of a security on some of the world's major stock exchanges.

Silver ETFs, like iShares Silver Trust (NYSE: SLV), track silver's spot price and can be traded much like any other security. The drawback here, however, is the cost of ownership... With issuing companies applying management fees to the certificate, the certificate's value diminishes over time as the silver represented is sold off in small quantities.

Least direct of all are investments in the companies that pull the metal from the ground. Because mining companies that mine silver usually mine other metals alongside it, the share price of such an outfit is rarely dependent on the price of silver alone.

Another factor to consider is the process of leveraging. Because cost of production and cost of product can vary, profit margins — the main driving force behind share value — will exhibit wider fluctuation patterns than the price of the metal alone. A 10% spike in the price of silver may well lead to a 40% gain in the mining company's shares.

As with any company, non-market factors such as management decisions will also play a role in the growth or decline of your investment. As a more speculative approach, buying shares can yield the biggest gains.

In my most recent report, I detail my top three stocks that will best play the growing silver bull market. I give the name of one specific silver stock that has paid annual gains of 852% over 9 years straight and looking to go higher.

To read my most recent report, simply click here.