Was This the Final Blow for Netflix?

Netflix Is on its Last Legs

Over the past couple weeks, I’ve shared why I see a gloomy future for Netflix and its shareholders.

Today, I’m going to give you two more reasons this stock is about to lose its fangs...

Netflix rose to glory because it changed how we watch movies and television. It made things easy because it was one place we could go for all of our favorite shows and movies.

And that drove its share price from less than a dollar in 2002 to its all-time high over $400 last year.

If all you’d had was $1,000 to invest, you’d still be sitting pretty. That investment would have been worth nearly a half a million dollars.

And even investors who missed the boat on those extremely cheap shares have made out like bandits.

Ten years after its IPO, Netflix shares were changing hands for less than $10. And while investors who got some skin in the game aren’t as rich as the early buyers, they’re still doing pretty well.

But the exact same thing that took Netflix to the top is going to be its undoing.

Last week, I noted that NBC’s The Office had been pulled from the streaming service. And while just one show doesn’t seem like such a big deal, we got confirmation soon after that it was just another crack that will inevitably break the levy.

The Office is the most streamed show on Netflix. Or it was until NBC pulled it. Friends was number two. So I guess it's number one now.

But come next year, that’ll be gone, too, along with a lot of NBC’s most valuable content. And a lot more to follow.

You see, Netflix doesn’t have a lot of its own content — about 500 or so shows and movies. Here’s a list: 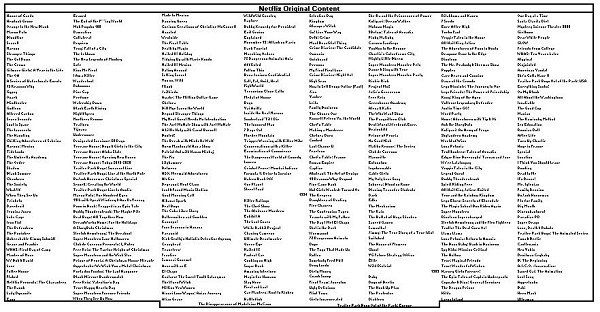 You’re not supposed to be able to read that. But you’ll see why I put it up for comparison in a minute.

And most of those licenses are due to expire in the next five years. That means Netflix is going to have to pay up or lose a good deal of the content offered on its platform.

Playing With the Big Kids

In case you’re curious how much content could eventually come down, let me give you two examples of just how little ammunition Netflix is bringing to this fight...

WarnerMedia owns NBC. It also owns HBO. And it in turn is owned by AT&T. And now, those giants are throwing their muscle behind a new streaming service called HBO Max.

Contrary to the name, it’ll feature content other than just HBO. It can and probably will feature content from all of the production studios WarnerMedia owns. And that’s a lot. In fact, it’s about half as many studios as Netflix has shows.

That’s about 250 production assets. And each of them has its own library of original content. Netflix can’t compete with that.

To make matters even worse and this fight even tougher, we’ve got Disney launching its streaming service later this year. And don’t forget, Disney already has a streaming service in Hulu. And the company just bought Fox. So there’s all that, too.

Disney owns more production assets than Netflix has original shows and movies. And some of those assets are Lucasfilm (Star Wars), Marvel Studios (The Avengers), and 21st Century Fox (The Simpsons).

All those studios own a myriad of content. Some of that’s on Netflix now. Most of it won’t be within five years. Netflix just can’t compete with that.

And that’s just two companies: AT&T and Disney. There’s also Comcast and Apple, Amazon and Microsoft. Even Sony is getting some skin in the game.

Netflix can’t compete with that.

Honestly, none of those companies are really going to win this battle. None of them are going to get shareholders another 44,000% return like Netflix did.

But Netflix and anyone buying its shares now are going to be the clear losers. You don’t have to sell your shares yet if you have them. But I wouldn’t recommend adding any more on the dip.

My partner and I uncovered an unloved company that’s doing just what Netflix did back in the early 2000s.

It’s breaking into every new market it can, growing faster than anyone else, and revolutionizing the way we enjoy an age-old pastime.

Remember earlier when I talked about the kind of returns early investors got out of Netflix? Nearly 44,000% for early investors. 43,000% for folks who got in 10 years late but still beat the crowd.

Think about those again. Really think about it. What would you do if you’d been one of them? What if you’d put a couple-thousand dollars into the company in 2002?

You’d have nearly a million now.

What if you’d been really confident and had $10,000 to put in play? You’d be a multimillionaire right now. And if you were reading this at all, it’d be from the deck of your yacht.

Even a $1,000 investment in Netflix would have been enough to pay off the mortgage on a nice-sized home in the suburbs. Or fund a couple college degrees. Or take a lavish cruise around the world and still have money left over to buy a boat when you’re done.

That’s the kind of opportunity we’re looking at with this new little tech company. It’s literally changed the entire industry it operates in. And everyone else has been left in the lurch, struggling to catch up.

But what’s got me even more excited than the innovations and the massive head start on the competition is the speed at which it’s still growing.

Netflix never grew this fast. Ever. And while the company is half the age of Netflix, it’s got more customers.

And yet its stock has been stuck in a pretty tight pattern, well below Netflix’s lofty $380 a share ticket. But that’s not going to last for long.

In fact, I expect it to change later this month. That’s because I’ve got my hands on some information that not many other people have found.

It’s public knowledge. But nobody cared to look for it, so nobody knows about it.

But its implications are huge. And it could start a 1,000% rally in this overlooked operation.

You see, this company has been growing its customer base fast. It’s doubled the number of users of its service every year. And it’s expected to double them again this year as well.

But I found out that it’s actually hit that target way early. And on July 26, the company’s management is going to make the announcement.

So if you’re able to get invested before July 26, you stand to be one of the “insiders” who benefits most from the rally that’s sure to follow.

But if you wait to see if I’m right and the announcement is really going to come, you’re going to be caught up a creek without a paddle. Because the rally will start as soon as the words leave the CEO’s mouth. And you’ll be stuck buying on the way up like everyone else.

My partner and I put together a presentation detailing the opportunity and how we know without a doubt that this announcement will come on July 26.

Just click here to access it. You’ll find out all about the company, the reason it’s been able to grow so fast, and how to get invested before the news hits.

But don’t wait. July 26 seems far away, but it’s only two weeks away. We’re already two weeks into July. Think about how fast that went. Ten trading days just isn’t a lot of time when you’ve got as many responsibilities as you have.

So check it out now, and check one of those responsibilities (planning for retirement) off your list.

Netflix Is Dead
Netflix is facing some serious competition. But that's not even close to its biggest problem. Wealth Daily editor Jason Williams delves further into the bear case for Netflix stock.
Is Netflix (NFLX) Stock About to Collapse?
Netflix has been the unquestioned leader of the streaming video market, but increased competition and rising costs could cause this high flyer to crash back down to Earth.
Why I'm Shorting Netflix, Inc. (NASDAQ: NFLX)
With so many new SVOD services hitting the market over the next six months, Netflix’s growth will begin to slow.
Buffett's Envy: 50% Annual Returns, Guaranteed
Warren Buffett once told investors at an annual shareholder meeting, "...it's a huge structural advantage not to have a lot of money. I think I could make you 50% a year on $1 million. No, I know I could. I guarantee that."