Warren Buffett was recently interviewed by CNBC on the state of the U.S. economy, and what he shared might surprise you...

In the face of so many doom-and-gloom pundits out there today calling for economic Armageddon and collapse, Buffett didn't seem worried in the slightest. In fact, Buffett actually spoke about the coming of what he believes will be an unbridled age of prosperity — a kind of economic “nirvana” where today's stockholders will reap the biggest rewards.

More specifically, Buffett spoke about something that's been a growing topic of economic interest in recent years — that is, the rapid emergence of automation and abundance, or as I sometimes like to call it, “The Robot Revolution.”

During his interview with CNBC, the "Oracle of Omaha" reflected on the sheer amount of technological progress he's experienced throughout his lifetime. He pointed out that, thanks largely to robotics and automation, we produce more goods per person today than at any other point in human history. Per capita, Warren shared, we have six times more output in 2016 than when he was born in 1930.

“Wouldn't it be nice,” Buffett proposed, if the economy would run simply by “one man punch[ing] a button?” What happens if robots, Buffett wonders, did just about anything and everything for us?

As much as that may seem like a pipe dream today, it's difficult to deny this is ultimately where we are headed as a society. Not tomorrow or next year, of course... but sometime in the not-too-distant future, full autonomy seems entirely possible.

Of course, there will be many pessimists out there (maybe you're one of them), but the evidence against them is striking. Not only are highly respected academic organizations such as Oxford now suggesting that 50% of today's jobs will be automated within the next 20 years, but the growing global supply of robotics pretty much speaks for itself. 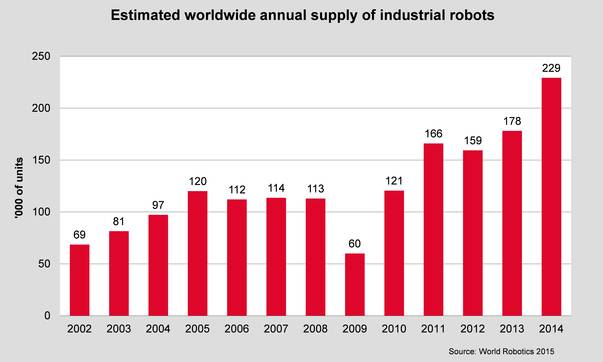 Compared to the turn of 20th century, we live today in a state of relative abundance and ease, with an increasing amount of credit due to robots. Some of the most important possessions you own — your car, your smartphone — were built (and made affordable) by robots. Every package you've ever ordered from Amazon: moved by a robot.

Thanks to automation, we are able, as a society, to collectively secure more goods today than at any point in human history, and this isn't a trend that is going to suddenly stop. This has been going on forever. Ever since man first picked up a stick, we've been manipulating nature to do things for us — to make our lives easier — and we're seeing it now more than ever.

What began with the printing of books and later evolved to vehicle production and smartphone manufacturing is continuing to expand its reach. Soon it will be your chores, daily commute, medical care, and food production that are automated. Eventually, as Buffett says, you may not have to work more than an hour a day because robots will produce virtually all the goods society demands.

This idea — that automation will bring about widespread prosperity and free up our time for better things than work — is what economic theorists now refer to as a "post-scarcity" society.

Post-scarcity is a theoretical economy in which most goods can be produced in great abundance with minimal human labor needed, so that they become available to all very cheaply or even freely... it is often taken to mean that all people can easily have their basic survival needs met along with some significant proportion of their desires for goods and services.

In many ways we already are reaping the benefits of post-scarcity... Consider, for instance, that in 1908, the average American worker made about $300 a year. The only car available at the time was the Model T, and it cost $850 — almost three years' pay. Yet today, Ford sells brand new cars off the lot for as little as $14,000 — less than four months' pay for the average American worker.

At the same time, no one wants to drive a Ford Fiesta for the rest of their life. We all want to get behind the wheel of a 5 Series, A6, or whatever else your dream car might be. We want a big house with a three-car garage. We want to be able to retire early and travel the world.

Obviously robots aren't going to hand you that life on a silver platter just yet... but they can help get you there decades before everyone else. All you have to do is embrace them — which is exactly what today's wealthiest individuals, most powerful companies, and brightest minds are doing.

This is why billionaires like Bill Gates, Elon Musk, and Jeff Bezos — as well as some of the world's brightest investors — are all betting big on robotics. It's why the world's most renowned investor, Warren Buffett, is still telling you to buy stocks at all-time highs.

But don't get too excited just yet thinking you can sit back and wait for nirvana to come. In the same CNBC interview mentioned above, Warren Buffett offered a dire warning to the common man: While automation is lifting up his bank account, it could very well leave you behind.

Warren's best advice was to invest in stocks, period. I would expand on this and tell you to invest directly in the technology that will be lifting up the market.

Some robotics companies, such as Intuitive Surgical (NASDAQ: ISRG), have already provided early investors normalized returns up to 7,230% (over ~15 years), which is absolutely insane when you think about it. Using history as a guide, there's no reason to expect that similar opportunities won't present themselves again. Ultimately, the automation trend has only one path, and that's forward.