If There Was Ever a Time to Buy...

Say what you will about nuclear energy...

But it's not going away. Not as smart investors realize Chinese demand far outweighs Japan's nuclear woes.

As a result, the biggest drop in uranium prices may be coming to an end as China and India make plans for nuclear developments that will more than double global uranium production.

China's Nuclear Energy Association announced two weeks ago they will boost atomic capacity as much as eight times by the time 2020 rolls around.

Turkey has a 4.8 GWe reaction site under construction on its Mediterranean coast and plans for a similar project on the Black Sea. They're looking to build a third reactor on the Bulgarian border.

The demand is very real, folks — despite the horrific events in Japan.

But that demand won't be met, so long as supply remains tight...

In other words, demand is about to far exceed supply.

Not only is the metal “at least $10 below the level required to encourage companies to increase production,” according to one Rio Tinto director, but the uranium market could remain in short supply between now and 2020...

And that should send uranium prices even higher.

Plus, with 443 nuclear power plants across the globe — producing some 14% of electricity — supply could become a real problem.

Factor in the International Energy Association's estimates for world electricity demand to grow some 2.7% a year until 2015, and then 2.4% a year until 2030... and we're in for some troubling times.

The other 50 million pounds come from the Russian Highly Enriched Uranium agreement between the United States and Russia. Once that agreement expires in 2013, we need to make up for a missing 50 million.

So how do you profit from this supply-demand scenario?

You could buy the beaten-down uranium and nuclear names in the sector. But I'd recommend checking out some of the stocks I've had my eye on:

If I'm right, uranium spot prices could rally off current spot prices of $56 to more than $80 a pound. And that could supply a company like Cameco with enough explosive catalyst to send it to at least $35 a share. 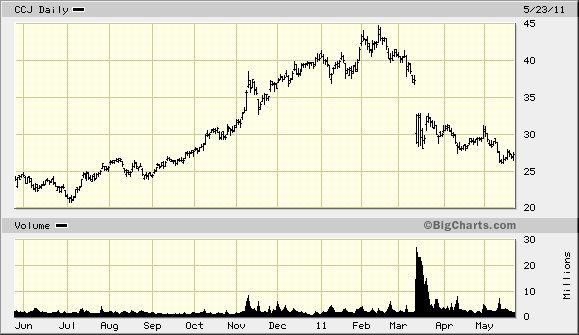 Even Warren Buffett and Bill Gates are bullish, believing the fundamentals are too strong for such a drop. Buffett just got finished telling investors “nuclear power is important for the world”.

We knew this long before Warren decided to give nuclear his blessing.

My colleague Luke Burgess believes the biggest gains of 2011 may be found in uranium. Still projecting $100 in 12 to 18 months, he sees near-term uranium racing back to $70 on the supply-demand imbalance.

And the one company that stands to profit just put together a massive, one-million-acre land package in an area that many believe holds the world's last giant uranium resources.

As I'm sure you can imagine, the buyers aren't waiting around...

Check out Luke's exposé on this company and its game-changing project.

With uranium poised to run higher off the lows, now is the time to buy big.