One of my Twitter followers called that article “a really interesting, easy to understand, actually fun to read article on $$$! And who doesn't like to understand $$$?”

High praise indeed. I said the appropriate thank-yous. You can read the article here.

Anyway, Uber has announced that it is ready to graciously allow you to buy its shares. Thank you so much, O great and powerful Uber...

I will tell you right now: I will not be buying shares of Uber. In a nutshell, I think Uber is a great service that will make a terrible investment.

In 2018, Uber took in close to $9 billion in revenue. Too bad its bills were over $10 billion. Yeah. It lost over a billion dollars in cash money last year. And that was a nice improvement over 2017, when it lost over $2 billion...

Know why Uber wants to be a $120 billion company? It has nothing to do with actual value. $120 billion is just a nice big number that lets all the venture capitalists that have invested in Uber turn a nice profit. Because that's what IPOs are about. All the song and dance is simply for the big investors to get their money.

And who are the big investors in Uber? Saudi Arabia's Public Investment Fund is in for $3.5 billion. Japan's SoftBank is in for $10 billion. Morgan Stanley has a $1.2 billion stake. Goldman Sachs has $2 billion or so in there.

And let's not forget Britney Spears, Miley Cyrus, and Jay-Z...

Clearly, SoftBank is the big one at $10 billion. It was also late to the party, and part of its cash got deployed when Uber was valued at $70 billion. If Uber manages to get a $120 billion IPO valuation, SoftBank won't even double its money. Kind of less amazing profits than we usually think about with venture capital, aren't they?

The thing is, there's a lot more venture capital firms out there today — 2,000 new firms since 2010. (That's why there's a ridiculous 25 members on Uber's board of directors. Talk about a clusterf*ck! And every one of those board members is well compensated.)

If you have a basic understanding of economics, these numbers should be setting off warnings bells. If you don't, you'll still understand the simple observation about what happens when there is too much money chasing too few goods... 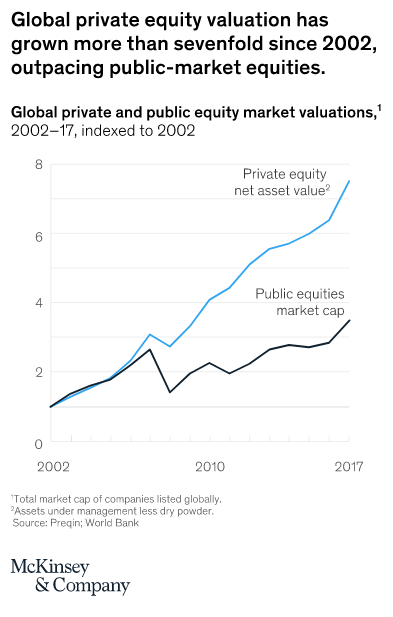 That's the formula for inflation. And I would bet dollars to donuts that venture capital is throwing some serious cash at some seriously crappy companies out there.

Is That Your Unicorn?

In January 2000, internet heavyweight America Online (AOL) bought out Time Warner for an incredible $165 billion. Some people took this to mean that internet companies were now just as "real" as the companies that did business in the real world...

It was actually the top of the bubble. Internet shares were worth about as much as they ever would be. (At least for 15 years or so, and really, some, like Cisco, have never gotten back to were they were when it popped.)

These days, as that chart above points out, much of that action is happening before companies go public, when they are still in venture capital land. These companies are called unicorns.

Have a look at Glossier. An article says Glossier is "known for its flagship line of barely there beauty products."

Founder Emily Weiss says: “We are building an entirely new kind of beauty company: one that owns the distribution channel and makes customers our stakeholders.”

Please allow me to be the first to say: WHAT???

I don't know what any of that means. Sounds like a sack full of hokum to me. But in the last two years, Glossier's valuation has tripled to $1.2 billion.

The sales pitch goes like this: “We were just a beauty blog in 2010, now we have $100 million in revenue. In the next five years, online spending on beauty products will hit $120 billion. We think we will be getting a good portion of that growth. Oh, and you know what the best performing S&P 500 stock is over the last decade? Ulta Beauty (NASDAQ: ULTA): $30 to $330 a share.”

Who wouldn't throw their life savings into Glossier????

Now, look. I have admitted time and again that I get grumpy. So if you hear me saying, "Get these unicorns off my lawn," well, you know why. Maybe all these unicorns will be amazing. Maybe it will be rainbows and pots of gold for every investor. Yeah, and monkeys might fly out of... Mmm, never mind.

Turns out, again, I'm running long, so again, I'm gonna pick this discussion up next week. Because there are a couple more points to make — I'm hearing about some really dynamic new private companies cropping up and getting VC funding in places like Iran and Pakistan.

I know my first grumpy thought was, "No way I'd invest in those places." But remember: More prosperity is the number one antidote to a lot of what ails those countries. And Iran has the youngest and best-educated population in the world.