Trust Busting Is Back!

And Amazon is going down

Teddy Roosevelt was known as the “Trust Buster” for going after big oil, big coal, the railroads... any company that was too powerful and had too much control. 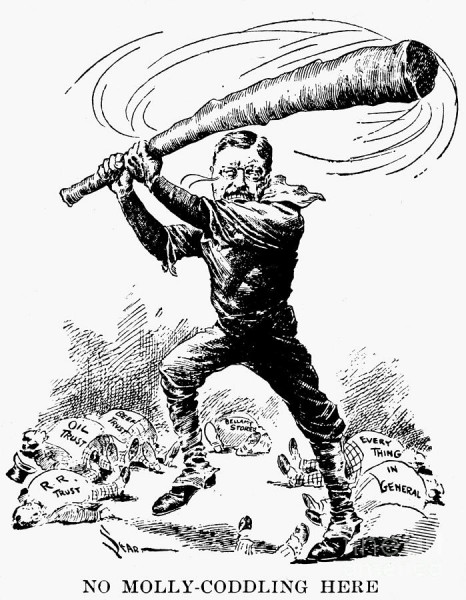 And he succeeded in breaking up many of the monopolies of his day.

Rockefeller’s Standard Oil is one example. It got split into seven smaller operations.

Those have recombined since then to become four: BP, Marathon, ExxonMobil, and Chevron. But they’re still not as all-encompassing as Standard was.

Return of the Trust

As successful as Roosevelt was, time has passed and lessons have been forgotten. And a handful of massive companies now dominate the markets once again.

The FTC recently slammed Qualcomm with an anti-trust ruling in a case stemming from complaints by Apple about Qualcomm’s monopolistic practices.

And now it’s got its sights set on another megalith in the tech industry: Jeff Bezos and his Amazon.com.

Amazon controls nearly half of the U.S. ecommerce market. 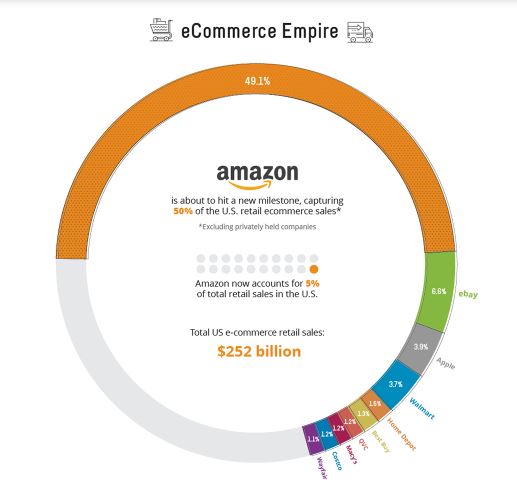 Combine all the other public companies’ sales together, and you just barely top those of this massive corporation.

And while a monopoly is technically when one company controls an entire market, owning half of it gives Amazon the power to squeeze out the remaining competition. Then it’ll be a textbook monopoly. And it’ll be a lot harder to do anything about it.

So Washington is starting now.

President Trump and Senator Elizabeth Warren don’t agree on much. And they don’t seem to like or respect each other at all.

But they do have some common ground that might surprise you.

They both have Amazon and its founder, Jeff Bezos, directly in their sights.

Warren has made her disdain for the wealthy very obvious. And Jeff Bezos is the richest man in the world. That fact alone makes him a target.

But he also controls one of the biggest and most powerful companies in the world.

And that’s where she and the Donald start to see eye to eye.

The president is no fan of Amazon. He’s made that abundantly clear in tweets such as this: 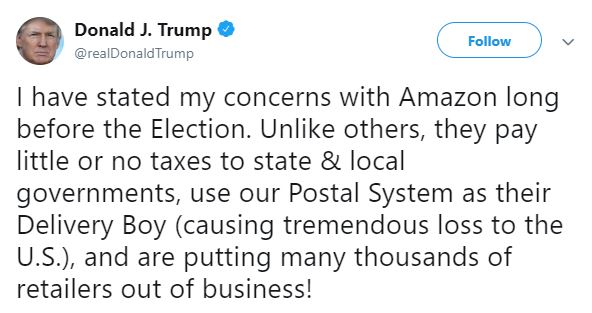 So two of the most powerful politicians in either party are in agreement. Something must be done.

One More Reason for Bezos to Worry

As if having Warren, Trump, and the FTC on his back wasn’t enough, Jeff Bezos has yet another reason to worry.

And this one is guaranteed to set him back hundreds of millions of dollars in the next few days.

That’s because Amazon has to grease a lot of palms to keep its monopoly running. And one of those payments is scheduled to go out next week.

It’s been going on for a few years now. And the amount has grown right along with Amazon’s market dominance.

Last year, it was just shy of $1.5 BILLION. This year, it’ll break that mark.

And next week, on June 12, over $300 million of that is going out in checks to people on the inside.

Now, you may be thinking, “I’m not powerful enough for Bezos to pay me.” Or you’re asking, “How is greasing my palm going to help Amazon?”

Well, you’re right. Alone, none of us is close to as powerful as Jeff Bezos with his hundreds of billions of dollars. And greasing just my palm or yours isn’t going to get Amazon any more profitable.

But thanks to a completely legal loophole, you and I can collect part of the billions Amazon spends to keep its warehouses running and its customers fulfilled.

My colleague and I uncovered the opportunity a while back. And after investigating it thoroughly to try and poke holes in the strategy, we recommended it to the members of our investing community.

Now they’re collecting a chunk of the billions. And they’re loving every second and every single penny.

Many have written in to thank us for cluing them in to this guaranteed payout.

I’d like to show you what they said, but I really don’t have enough space here. So my partner and I asked if we could put together a presentation detailing the opportunity and introducing you to some of them.

And our community jumped at the idea. They want to share the opportunity with other like-minded investors. And they were happy to have a chance to brag about their earnings.

So, if you’d like to collect a piece of this multimillion-dollar payout, take a few minutes today and give our presentation a watch.

It’s got all the information you need to get started collecting your checks. And you’ll get to meet some of your future fellow investors and hear about their successes, too.

Just don’t put this on the back burner if you’re really interested in making serious money. The next payment gets calculated on June 12. That’s less than a week away.

Get on the list before the 12th is over, and you get money. Try to get on board the day after, and you’ll get a big pile of nothing.

So don’t delay and miss out on another opportunity to secure your financial future.

Watch our presentation now, and start getting paid next week. I really can’t make it any easier.