Trouble in Iraq: ISIS, Oil and the Dinar

Military Movements in the Fertile Crescent

A strange thing happens when terrorist movements strike. While their intent is to unite their allies and divide their foes, they sometimes accomplish the exact opposite - uniting and strengthening their opponents to stand up against them, and tearing old allegiances apart who suddenly deny their associations.

ISIS (the Islamic State in Iraq and al-Sham, interchangeably Islamic State in Iraq and Syria) - an extremist splinter faction of the terrorist group Al Qaeda, which has been advancing across central Iraq capturing large swaths of territory - may have inadvertently driven wedges among Arab states including Syria and Saudi Arabia for their purported connections with the group, even incurring the ire of their former master Al Qaeda who ordered the group’s disbandment.

At the same time, ISIS may have inadvertently united the governments of the U.S., Iran and multiple western governments into coordinating their efforts to contain the group before it tears Iraq apart.

Ten years’ worth of blood, sweat and tears have been spilled and billions of dollars expended trying to stabilize and rebuild the nation of Iraq. Will ISIS be the undoing of all that work? Are Iraq’s oil industry and currency, the dinar, expected to hold up?

With the world’s second largest proven oil reserves within its borders, the world is keenly interested and queerly united in stamping the group out of existence.

Why ISIS is Such a Threat

ISIS puts a twist on the war against terrorism, since it is not your typical terrorist group that simply fights for a cause, ideology or an established regime. ISIS is more accurately identified as a politically driven militia intent on forming a brand new country of its own by moving in and confiscating territory.

“This is not a terrorism problem anymore,” clarified Jessica Lewis, an expert on ISIS at the Institute for the Study of War, a Washington think tank. “This is an army on the move in Iraq and Syria, and they are taking terrain.

They have shadow governments in and around Baghdad, and they have an aspirational goal to govern.”
This aspiration to form a nation it can call its own dates back to the group’s formation back in 2004 in the aftermath of the invasion of Iraq by western forces the previous year.

Swearing loyalty to Osama bin Laden, the group took the name “Tanzim Qaidat al-Jihad fi Bilad al-Rafidayn”, roughly translated as “The Organization of Jihad's Base in the Country of the Two Rivers”, more commonly nicknamed “Al-Qaeda in Iraq”.

Over the following two years, the group merged with several smaller insurgent Iraqi groups, all banding together to rid their nation of the invading foreigners and establish their own orthodox Muslim state.

“We swear by Allah … that we will strive to free the prisoners of their shackles, to end the oppression to which the Sunnis [orthodox Muslims] are being subjected by the malicious Shi'ites [Muslim division] and by the occupying Crusaders [western armies], to assist the oppressed and restore their rights even at the price of our own lives … to make Allah's word supreme in the world, and to restore the glory of Islam,” so pledge the group’s members.

Although Sunni Muslims form the largest branch of Islam worldwide (80% Sunni, 15% Shiite), in Iraq they are the minority (65% Shiite, 30% Sunni), and have always viewed themselves as oppressed by the dominant Shiite.

The struggles between the two branches of Islam have often divided the Middle East along religious lines: Iran and southern Iraq in the Shiite camp, with Saudi Arabia, Syria, central and northern Iraq, and several radical terrorist groups including Al Qaeda and ISIS in the Sunnis camp.

It must be noted that although the northern-most Iraqi region of Kurdistan is predominantly Sunni Muslim, it has long been pro-west in its leaning. Iraq is often described as three separate nations forced into an unhappy union – the Shiite majority in the south, the Sunni minority in the center, and pro-west Kurdistan in the north.

It is this central Sunni region of Iraq where ISIS developed, quickly spreading into neighboring Syria. Yet the group has its sights on enlarging its territory even more, laying claim to vast regions of Lebanon, Israel, Jordan, Cyprus and Southern Turkey.

An extremely violent group responsible for countless attacks on government and military targets killing thousands of Iraqi civilians besides, even al-Qaeda publicly denounced it, calling for its disbandment in 2013, and ultimately cutting all ties with the group in February of 2014.

Yet ISIS’ leader Abu Bakr al-Baghdadi has contested the expulsion on the basis of “Islamic jurisprudence”, vowing to restore pure orthodox Islam by forming a nation of his own in the heart of Middle East. 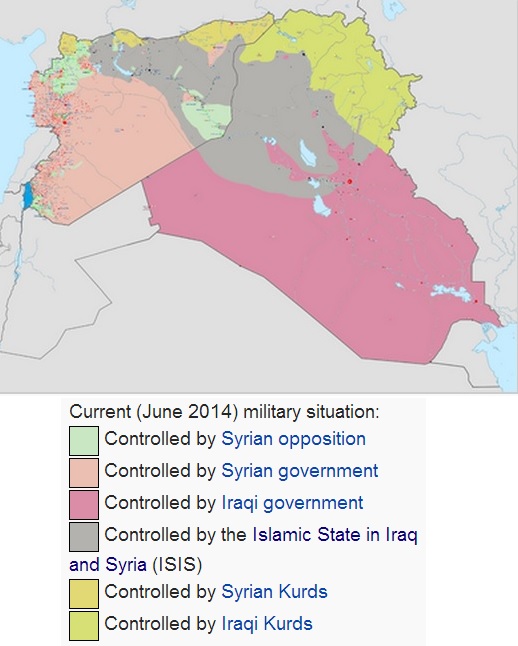 Not only have old allegiances between ISIS and Al-Qaeda broken apart, but Syria and Saudi Arabia may soon be forced to distance themselves as well. Iraq’s Prime Minister Maliki has accused Saudi Arabia and Qatar of funding ISIS’ operations, with more private donors from several gulf states purportedly involved.

Additional funding is suspected to be coming from the government of Syria, which is believed to be purchasing oil from wells ISIS has commandeered throughout its area of control.

In addition to oil revenues, ISIS is believed to have earlier this month looted the central bank of Mosul, the capital city of the Iraqi province of Nineveh, confiscating more than $429 million worth of gold. Iraqi intelligence believes the group controls over $2 billion worth of assets, giving it plenty of economic might to keep its insurgency raging for years.

The scope of the threat posed by what is no longer a terrorist group but an outright army is forcing two other nations who have long been at odds to collaborate – the U.S. and Iran. Last week Iran moved two units of its Republican Guard numbering some 500 troops into Iraq to protect the capital of Bagdad and other key Shiite holy sites. President Obama recently announced he would be sending 170 soldiers back to Iraq, with another 100 on stand-by.

Though the two nations are not necessarily all smiles and hand shakes, with their meeting this past Monday described as “very brief”, the two foes have expressed their common interest in ridding the region of ISIS. Iran, for its part, does not like the idea of a radical Sunni organization on its western border, while the U.S. and other western nations cannot afford to allow Iraq’s contribution to global oil supplies to be interrupted.

While ISIS has yet to penetrate either of Iraq’s main oil producing regions in the northern and southern regions of the country, the prices of both Brent and Texas Intermediate crude have surged nearly five percent this month alone. Yet analysts believe the insurgence’s impact on oil prices are only temporary, with futures contracts several years out barely rising one or two percent.

In its latest oil market report last week, the International Energy Agency expressed little worry over Iraq’s oil production. “Concerning as the latest events in Iraq may be, they might not for now, if the conflict does not spread further, put additional Iraqi oil supplies immediately at risk,” it downplayed the threat.

Oil production in the northern region has already been at a slow trickle for years, with most of the government’s focus directed to developing the southern fields. Hence, any disruption in the north would have little impact on supplies.

While the IEA did acknowledge that Iraq is being counted on to supply “roughly 60 percent of the growth in OPEC crude production capacity for the rest of this decade”, the agency remains confident that other sources can be tapped to supply that growth should Iraq’s production be impeded.

“Perception of heightened political risk in North Africa and the Middle East and chronic disruptions in Libyan exports have been a feature of the market for some time,” the agency admitted, “but so far have been largely offset by record growth in non-OPEC supply.”

The IEA forecasts that North America alone will be supplying 61% of new growth in global oil demand by 2018. Any interruption in Iraqi output would only spur further investment in non-OPEC regions such as North America.

“U.S. crude is going to have a muted response, because we're more independent than we were in the past,” Mark Waggoner, president of Excel Futures in Bend, Oregon, remained confident of stable oil prices.

Iraqi Dinar – The Next Casualty?

While the ISIS insurgence has hurt the oil price in the immediate term, it seems to have benefitted Iraq’s currency, the dinar – which rose 4% in value against the USD on June 12th, where it has remained solidly pegged ever since. As noted in the price chart below, gone are the fluctuations of day by day trading. A fixed peg seems to be in place, likely to stave off inflation which typically sets-in in times of crisis. 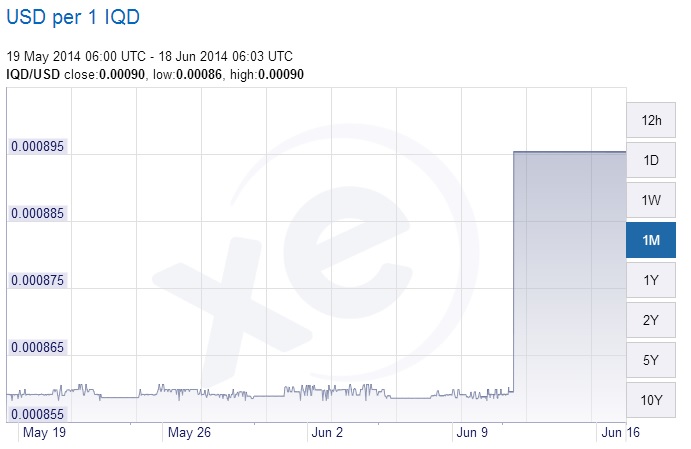 While the Iraqi central bank is not very open about its dealings, nor up-to-date with its data (its website still posts 2012 forecasts on its home page), we would probably be right to suspect that it will keep its money pegged to the USD until such time as the ISIS insurgence is neutralized.

Holders of the dinar should not look to its recent 4% gain in value as the first step toward that long-awaited upward revaluation. This hike is a clear reaction by the ICB to ensure a stable currency during the ISIS crisis, and will most likely be lowered back down once the threat has passed.