Aluminum Imports to China Expected to Jump 2,446% in 5 Years

Aluminum imports to China are expected to increase more than 25 times by 2015.

You read that right...

The Chinese are gearing up to devour aluminum on a scale previously unimaginable, boosting imports from 200,000 tons to over 5 million tons in five short years!

And owning shares of companies that produce aluminum and aluminum-based products for export to China could leave a handful of perceptive investors juiced with heart-fluttering investment gains.

Today, I'll tell you about the top three public companies that are set to profit the most with projects and processing facilities in the two most important countries that export aluminum products to China.

But first, I want clear up some common confusion about aluminum products...

Investors are often confused by the differences between aluminum and alumina, and alumina and bauxite.

Here's exactly how it all breaks down:

The world's most successful aluminum companies have established and manage the full production cycle — from the extraction of raw materials to the production of a final metal product.

And it begins with controlling bauxite resources.

The world's resources of bauxite are spread around the world. There are only seven bauxite-rich areas: Western and Central Africa (mostly, Guinea), South America (Brazil, Venezuela, Suriname), the Caribbean (Jamaica), Oceania and Southern Asia (Australia, India), China, the Mediterranean (Greece, Turkey), and the Urals (Russia). 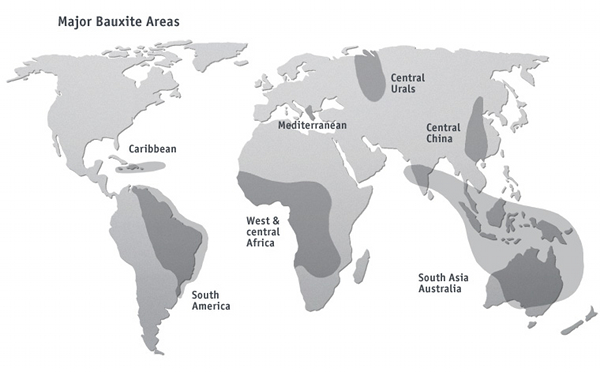 Due to the limited supply of raw materials, the global aluminum industry has been consolidating for the past 20 years.

And at this point, the main deposits of high-quality bauxites with high aluminum content are already divided up among the major players.

These companies make up the largest producers of bauxite, manufacturers of alumina, and smelters of aluminum in the world; they're at the helm of the global aluminum market.

A handful of these specific companies could be getting ready to pay investors as...

Aluminum imports to China are expected to jump 2,446% in five short years

China is already the world’s largest producer and consumer of primary aluminum.

But Texas-based Harbor Intelligence — the world's leading authority on the global aluminum market — believes the booming Chinese economy will drive the demand for aluminum-based products skyrocketing between 2011 and 2015. 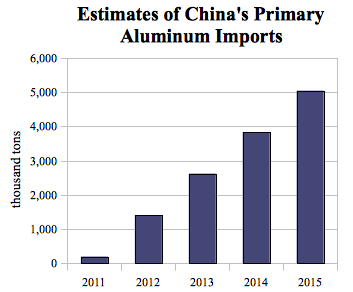 Approximately 60% of China's primary aluminum imports come from Russia. Another 20% is contributed by Australia, with the rest from other sources. 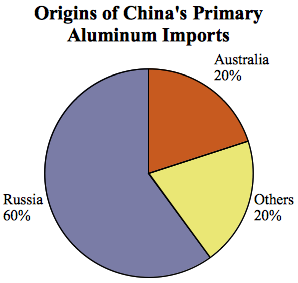 And by owning shares in public companies with bauxite, alumina processing, and aluminum smelting projects and facilities in Russia and Australia, investors are best leveraged to profit from Harbor's projected 2,446% increase in primary aluminum imports to China.

With that in mind, here are the top three largest public aluminum companies with assets in Russia and Australia.

United Company RUSAL (Hong Kong: 486) is the world’s largest producer of aluminum. The company's products are exported to clients in 70 countries.

RUSAL accounts for about 75% of all the primary aluminum produced (about 2.5 million tonnes) in Russia.

Alcoa (NYSE: AA) is the third largest producer of aluminum in the world. From its operational headquarters in Pennsylvania, Alcoa conducts operations in 31 countries — including large operations in both Russia and Australia.

The company is focused on the production and management of primary aluminum and alumina through its active and growing participation in all major aspects of the aluminum industry: technology, mining, refining, smelting, fabricating, and recycling.

The company's operations in Australia are 60% owned by Alcoa and 40% owned by Alumina (NYSE: AWC) and include 2 aluminum smelters, 3 alumina refineries, 2 bauxite mines, 1 secondary aluminum plant, and 2 aluminum rolling plants. 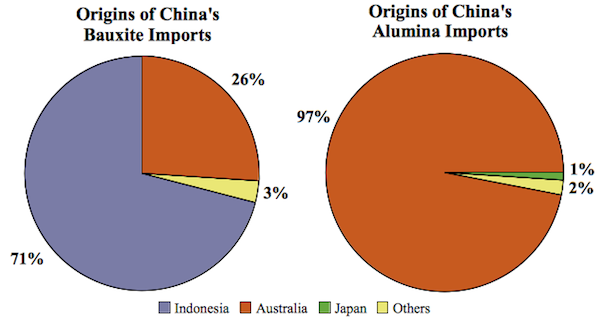 The company's operations are derived from all stages of the aluminum production process including mining bauxite, refining bauxite into alumina, smelting alumina to produce aluminum, and manufacturing a large variety of fabricated and semi-fabricated aluminum and composite products.

Rio Tinto Alcan currently owns, operates, or has interests in 6 bauxite mines and deposits in 4 countries, 10 alumina refineries in 5 countries, and 23 aluminum smelters in 10 countries.