The Yen's Loss is Gold's Gain

It can't seem to catch a break: perpetual stagnation, high youth unemployment, a rapidly aging population, natural and nuclear disasters, and a weak economy being battered by boycotts fueled by nationalistic fervor in China.

You can't blame the Japanese for wanting to do something — even something desperate — to try to make their own luck.

After seeing Europe and the U.S. eek out of recessions with quantitative easing, Japan wants to give printing and spending its way out of trouble a shot.

A little over a month ago, Japanese voters returned control of the government to the Liberal Democratic Party, which has led the country for most of the last six decades. This guaranteed the return of former Prime Minister Shinzo Abe, who rose from the ashes on a platform of hawkish attitudes towards China and strong moves to break a deflationary currency.

We'll see how long he holds on to power...

Abe is Japan's seventh prime minister in six and a half years.

He's already pushed the central bank to a 2% inflation target, vowed to establish a growth strategy, and rolled out $117 billion in new spending. It is, by far, the biggest stimulus the country has seen since the start of the global recession.

All of the changes are designed to combat one trend: Japan's balance of trade is mired in negative territory, and nothing it has done to date has helped.

You'd be wise to take cover...

We're in the middle of a renewed currency war.

The yen, U.S. dollar, and euro have returned to their three-way race to the bottom. Once again, there is no "safe" currency to hold for any amount of time.

The success or failure of Japan's efforts won't matter to gold prices. All that matters is more debt, more yen sloshing around, and competition amongst major economies to boost exports. And those conditions are virtually a done deal.

The timing couldn't be better for gold investors. A strange sort of equilibrium appears to have been established over recent months. Money has poured into soaring equities and a sustained market rally that is bringing the S&P 500 to new five-year highs, counteracting bullish factors for gold.

Yet we still have lingering and justified fears of inflation if the economy really manages to heat up, unending quantitative easing in Europe and in the United States, and all of the short-term patches for fundamental political problems on both continents...

Although gold is down quite a bit from its high point around $1,800/oz last year, it is consolidating into a narrow band. Over the last couple weeks, it has traded between a dropping 50-day moving average and $1,625. That's a difference of only $60.

When gold prices breached the bottom of the trend twice, buying picked up and small rallies ran for a couple weeks until the price broke down and started again. The current tightening trend in gold prices will act like a spring. Tension will rise as traders look for a break in either direction.

Once the pattern breaks, a lot of built-up energy will force prices to quickly lurch in one direction.

In this sense, Japan is giving a gift to gold bugs.

Now that all three major currencies are going to trend downward to battle over export advantages, develop stronger balances of trade, and shrug off anemic growth prospects, precious metals are looking better by the day.

Gold prices will snap out of this cycle soon. This will provide a good reason for gold to break upward out of the pattern as central banks and investors continue to build reserves.

Coupling a well-timed gold position with some hand-picked stocks to capitalize on the strong domestic markets will be a potent way to double-dip as weakening currencies boost gold and the desire to stay in equities.

After all, the old idea of a negative correlation between gold and the markets mostly ended once quantitative easing started.

These days, gold and the markets trend upward together during bullish streaks; the inverse relationship only kicks in when the markets tank. The downside to gold is virtually gone. 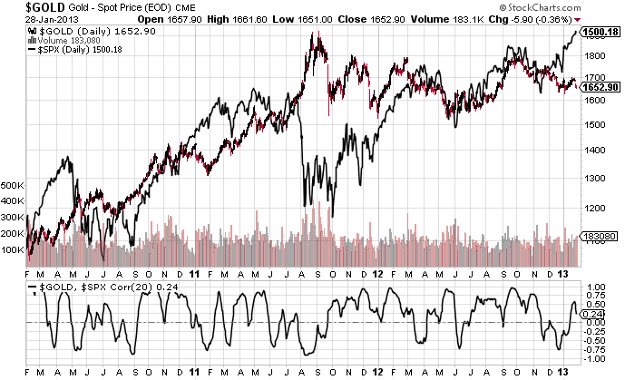 Investors have a number of options to pick from to set up an easy gold play...

Gold ETFs are an easy way to get on board through IRAs or other accounts when prices hit the cyclical bottom around $1,625. The biggest name in the field is the SPDR Gold Trust (NYSEARCA: GLD).