Of course, gold is very rare and making a significant discovery isn't easy.

But ask any geologist...

The best place to find large deposits of gold is close to where other major deposits have already been discovered.

That's why I've recently been looking to invest in a region that many consider one of the best places in the world for gold exploration.

Nevada is one of the largest sources of gold in the world. By itself, the state contributes over 7% of total world gold production, making it the fourth largest producer in the world behind, China, South Africa, and Australia.

The majority of Nevada's vast gold resources is contained in the second largest economic gold anomaly in the world — second only to South Africa — called the Carlin Trend.

These hot springs brought an abundance of dissolved minerals toward the surface; among these minerals was a fortune of gold.

In the past two decades alone, over 200 million ounces of gold have been discovered... And over 70 million ounces (worth $84 billion today) were produced from the Carlin Trend.

Similar gold trends surround the Carlin Trend, where other major multi-billion-dollar gold discoveries have been made: 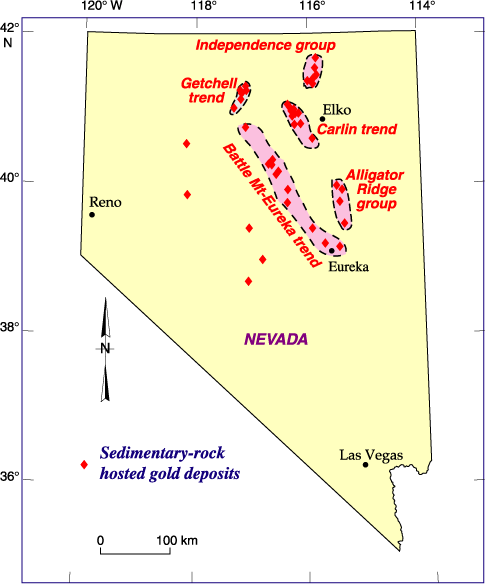 In these surrounding trends, world-class multi-million ounce gold deposits continue to be discovered.

Some discoveries are believed to be large enough to rival the famous Carlin Trend, and this drastically increases the investment potential for junior gold exploration companies working in these areas.

For junior gold companies, Nevada is one of the best places in the world to explore.

New major gold discoveries continue to dot the Nevada landscape; every year, millions of ounces of gold continue to be discovered in Nevada.

So it's likely that there is still a lot of gold to be discovered.

And just being near other large gold processing facilities is important... 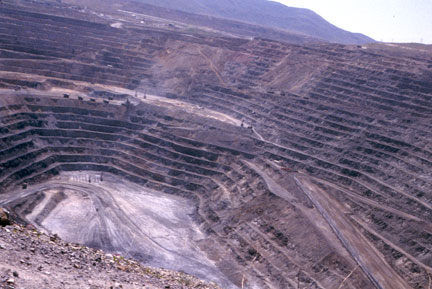 Buyouts of junior gold companies — which are typically large paydays for investors — have become common today as major gold producers are in desperate need of acquiring new deposits.

Rapid development of production quickly diminishes a company's gold reserves. And majors need to replace their reserves by the millions of ounces each year to keep up with production and demand.

The fact is the major gold companies just don't have as much talent as the juniors in making discoveries.

That's because talented mine finders want to work for themselves instead of for the majors. It's also because they stand to make a lot more money out on their own.

A top geologist with a major that makes a big discovery might get a sizable bonus and a new credenza in their office...

Meanwhile, a junior mining executive who makes a big discovery could make tens of millions of dollars — or more.

In addition to the benefits of the potential for major new discoveries, access to modern infrastructure, and close proximity to potential buyout candidates, mineral exploration in Nevada is as good as it gets when you consider political and environmental risk.

Nevada is one of the easiest places in the United States to work as an exploration company.

There are no problems with environmental or political concerns as there are in so many other places in the United States and around the world.

Gold brings in enormous revenue and jobs to Nevada, and mining companies are all highly responsible in reclaiming the land when they finish with their projects. This situation looks like it should continue unimpeded for many, many years.

Also, since Nevada is in the United States — and gold is priced in dollar terms worldwide — gold mining companies in the U.S. don’t have the currency exchange risk we see in places like South Africa and elsewhere.

A South African gold mining company has to produce gold with costs being in the local currency, and the company's revenue being paid in U.S. dollars. And when the company exchanges the currency, it takes take a big hit. This is not a problem for mining companies in the U.S. and Nevada.

To the south of the Battle Mountain-Eureka Trend, experts believe they may have discovered a new band of gold deposits that may eventually rival or even surpass the famous Carlin Trend.

They call it the Cortez Trend.

Cortex Hills is home to 14.1 million ounces of gold reserves — worth almost $17 billion out of the ground at today's prices.

Some new interpretations of the Cortez Trend have caused many experts to believe that it may be the next Carlin Trend-sized region.

But what's different about this trend is that instead of just major companies controlling the best land positions, a host of junior mining companies are staking highly potential claims...

The company has ten of its projects joint-ventured with companies including Barrick Gold and Newmont Mining, which spent a total of $2.5 million on gold exploration of Miranda's projects last year.

In 2009, the company aggressively acquired two new projects in the region while exploring four others, with 8,500 meters drilled in total.

This year Miranda expects to continue executing successful joint-ventures with two new partnerships (currently in the negotiation stage) and gold exploration (with over 8,000 meters planned).

The company just initiated a 2,200 meter drill program at one of its projects in the Cortez Trend called Red Canyon.

Miranda will drill eight holes there to expand upon last year's drill results, which recovered grades as high as 36 meters of 5.25 grams per tonne of gold.

Over the past 20 years, Coral Gold and various venture partners have spent more than $25 million exploring the claims. This activity has led to the discovery of five mineralized zones that, in total, contain 3.4 million ounces of gold resources.

Coral Gold is currently receiving the assay results from exploration drill testing which began at the beginning of June. The most recent results showed one hole intersected 1.5 meters of ore grading over 13 grams per tonne of gold.

There are many benefits to investing in junior gold mining stocks with projects in Nevada — especially those that have projects located along major known gold trends, including:

The gold trends in Nevada — including the Carlin and Cortez Trends — are some of the hottest exploration areas in the world right now.