The Truth about Gold

Get Some Certainty in Your Investments

Conventional wisdom says that gold is a safe haven.

They say that, as threats to the economy and the value of the U.S. dollar increase, people buy gold to protect their wealth.

So it would seem to make sense that with the government shutdown in full effect — and no resolution on the horizon — gold prices should be higher...

Instead, gold prices got shellacked yesterday.

Yes, it's time to get real about the price of gold and why it is where it is.

And if you bought gold mining stocks, the situation is even worse...

The trend in the gold market is not good. And there's no reason to think it's going to get better.

The head of commodities at Credit Suisse had this to say:

We think there's no proper incentive for investors to buy a lot of gold. In the end, if the investment buying is weak there is very little potential for gold to increase.

I want to be clear about this: I don't have an ax to grind against gold. I don't cheer when the price goes down. And I'll gladly trade it when it rallies.

But I also hold no illusions about the yellow metal.

Gold has no “intrinsic” value.

There's no law or rule that says gold is worth a certain amount of money.

You can't eat it, or live in it... nor can you exchange gold for things you can eat or live in.

This is an important point: Gold is not money.

And in fact, it's not going to be money any time soon.

The problem is it is impossible for us to say exactly what that something is.

My point is simply that there's no reason to think that the “something” that gold is worth today will be more tomorrow.

Past Performance is No Guarantee of Future Success

Like most assets — and gold is an asset — it is worth what someone else will pay for it.

The same is true of art, wine, used cars, and growth stocks.

Just because gold was $1,700 an ounce two years ago has absolutely no bearing on its price today (though truth be told, the decline is more likely to be self-perpetuating as gold bulls give up or capitulate to the relentless downward pressure).

Have you seen a long-term chart of gold? 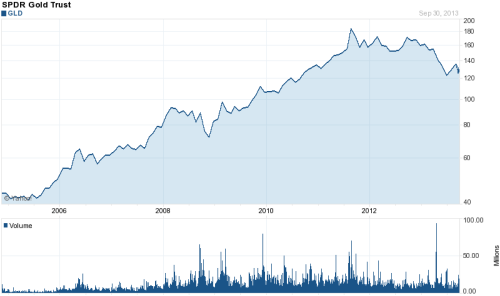 As gold prices fall, the situation will get worse...

Gold-oriented funds will fail and be forced to dump assets. Gold miners could fail, as sale price can no longer cover expenses. And investors may start to unload gold stocks, bullion, and coins to prevent losses, thereby pushing prices even lower.

Right now, the value of gold is very much in question.

Of course, we could say the same thing about a growth stock like Amazon.com (NASDAQ: AMZN). How can a company that lost money in two of the last four quarters (and is expected to lose money in the current quarter) trade with a forward P/E of 115 and carry a $317 share price?

I sure wouldn't buy it.

I get the fact that Amazon has posted phenomenal growth. I can see that the company does $66 billion in annual revenue; and I fully see the potential that Amazon has as the dominant Internet commerce website.

Analysts expect Amazon will turn a $1.2 billion net profit in 2014.

But the problem with Amazon for me is that there isn't enough certainty about what the company is worth.

If I were an Amazon investor, I would not like that.

I much prefer the certainty of a company like Ford (NYSE: F), which I recommended here in Wealth Daily a couple weeks ago...

I can easily understand Ford's business model. I can calculate that in 22.5 years, Ford's 2.3% dividend will completely recoup my investment.

What's more, I can see that Ford is only paying out 20% of earnings as dividends, so there's plenty of room to raise the payment. So, I can reasonably assume that my initial investment will be returned in less than 22.5 years.

With a forward P/E of 9.7, I can judge that Ford is undervalued and may have 20% upside in the next 12 months.

That's the kind of certainty I demand in an investment.

Unfortunately, gold just doesn't have it.