The Tesla of Hydrogen Fuel Arrives... at 221 MPH

I'm old enough to remember a time when the term "electric car" brought to mind images of a bulbous, teardrop-shaped piece of plastic gliding along in the far right lane, on pizza-cutter-thin wheels, at just under the speed limit.

In the driver's seat, positioned way too close to the steering wheel, with a "maybe today is the day a girl talks to me" look of fading hope on his bespectacled face, the middle-aged nerd driver completed the picture.

Those days are long gone, and the reason they're gone can be summed up in one word: Tesla.

When Tesla Motors (NASDAQ: TSLA) introduced its first production model Roadster to the world in 2008, our collective view of electric cars changed instantly.

Gone were the skinny wheels, the awkwardly designed bodies, the laughable performance — and with it, the idea that electric cars can't be exciting. This new two-seater could do 0–60 in less than four seconds, topped out at 150 mph, and looked the part from bumper to bumper.

Perhaps the only artifact that today's EVs held over from the previous generation was the one behind the wheel, but so strong was the cultural shift on the issue of electric cars that even that geek stood to gain some major social cred just by owning one.

That's the gift that Tesla gave to the world: a sexy, performance-oriented redefinition of the concept.

Today, the fact that electric cars can be fast, sleek, and downright cool is an afterthought. Even Ferrari, the very embodiment of automotive sex appeal, is now putting electric motors into its products.

So yes, we do have Tesla to thank for this revolution... but what now? Does it end here? Does the world switch over from oil to rechargeable batteries across the board and a new era begins?

You see, electric cars — the kind that you plug into a wall or into a charging station conduit — are still very much adding to the underlying problem which started the drive towards carbon control in the first place.

Every watt you put into your Tesla has to come from somewhere, and in this country as well as in most nations across the world, that somewhere, more often than not, is still a fossil-fuel driven power plant.

Almost two-thirds of our electricity comes either from coal or natural gas, so even with a Tesla in your garage, your hands are still not bloodless.

A revolution in personal transportation, for it to be truly revolutionary, would require total independence from fossil fuels — a true zero-emission, scalable, affordable, safe-to-operate power source.

That technology isn't far off. In fact, it exists today. There are vehicles on the road that use it. You might have even driven past one last time you were driving through a city.

The technology in question is the hydrogen fuel cell, and it actually delivers on the false promise made by every modern EV. It's safe. It's proven. It can be adapted to many existing vehicles. As the name implies, it runs off the most abundant element in the universe: hydrogen. Its only byproduct for getting you to your desired destination is water vapor pure enough to drink.

Hydrogen fuel cells have been around for years. It's in city busses. It's in rental cars. But you probably don't care... and the reason goes back to Tesla.

Because right now, our accepted stereotype of what a hydrogen-powered car looks like is this:

Well, what if all that changed... what if instead of picturing your spinster aunt as the target market, you pictured your favorite sports superstar, Hollywood actor, or pop singer?

What if the image that came to mind when you heard "hydrogen fuel cell" was this: 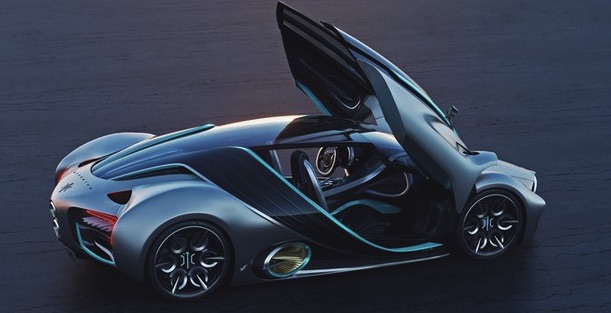 Introduced to the world this summer, this car does 0–60 in 2.2 seconds. It tops out at 221 mph. It can go more than 1000 miles on a single fill-up. Moreover, its door design is borrowed from a McLaren. Its shape is evocative of a Bugatti. Its exclusivity rivals any Ferrari.

The Hyperion is, for the hydrogen fuel cell market, what the first Tesla Roadster was for electric vehicles.

Now, I know what you might say... this is a one-off supercar; it won't make a difference in the long run.

Wrong. In 2022, the XP-1 will debut as a consumer product — 300 units will be made. Sounds like a tiny drop in the bucket, but Tesla only released 500 of its Roadsters in its first year of production, just enough to light the fuse.

And with these performance numbers, it's very likely that the XP-1 will be able to do the same for hydrogen fuel cells. Once that happens, we will be one step closer to a truly transformative moment in the history of personal transportation.

This Could Be the End... for Conventional EVs

With things like hydrogen fueling stations presenting the same problems that electric charging stations did for electric vehicles, this transition will not take place overnight, but its eventual success is almost assured at this point.

There is even talk of mounting devices on these cars which will be able to pull hydrogen molecules from water to power future fuel cell-powered cars.

Whatever form the solution takes, it will certainly be a nail in the coffin not just for internal combustion engines, but for conventional electric vehicles as well.

That means this just might be the most important technological and industrial trend of the mid-21st century.

One of my colleagues, Jimmy Mengel, saw this coming a long time ago.

He's studied the tech, he's studied the market, he even flew out west and spent a day driving around in one of these (not-so-sexy) hydrogen fuel-powered cars.

After taking an extended, extremely close look at this trend, he's pinpointed what might be the most prospective company operating in this space today.

It is, like most things in this sector, still in its early stages, but that's exactly where we like to find these opportunities.

If you want to learn what he knows and get your own look at perhaps the best way to leverage this trend on the stock market, I urge you to take a look at the video presentation he recently published.

It'll change the way you think about electric cars and open your eyes to where the future truly lies.