What this Little-Known Signal is Telling Us Now

Thanksgiving is a time to be grateful for our family, our friends, and our hate mail.

Speaking of hate mail, this showed up in my email yesterday:

I enjoy your writing and thought-provoking articles, but in regards to gold, you don't know what you are talking about. You say that gold will go to $2,000-$3000 a ounce, or maybe higher. But it has done nothing for a year. Obama will turn the economy around and gold will go back to $300, just like it did in the 1990s.

First, let me acknowledge that I don't own tarot cards, nor am I a wizard. I don't sacrifice white goats during the summer solstice and read omens from their entrails.

I make my predictions on the markets using time-tested models, historical research, and a broad knowledge and practical experience of how markets work.

I don't know for a fact that gold will go up... but I do know with certainty that it will.

There are many reasons to think gold will continue to go up in value...

All of these things are true and cannot be disputed. They will have their impact.

But the number one reason the gold bull market will continue is a rule so simple, a five-year-old could understand it — and yet very few people know about it.

Not only that, but when this secret signal reverses, it provides a clear sell signal as well. It's just like ringing a bell at the top.

The price of gold has everything to do with Real Interest Rates (RIR).

There is only one reason the smart money buys gold, and that's because you can't make any money from bonds.

This means the price of gold is directly linked to RIRs. 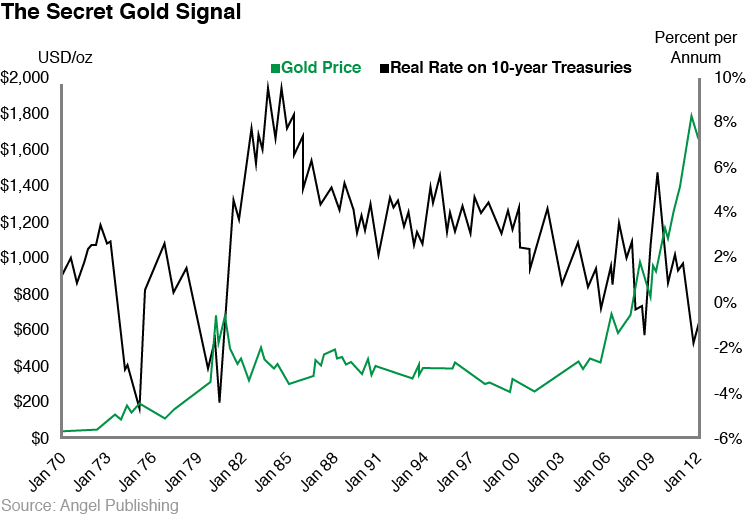 When RIRs are negative, gold goes up. Simple.

Just to review, the definition of RIR is an interest rate that has been adjusted to remove the effects of inflation. This reveals the true yield to the lender.

The RIR of an investment is calculated as the amount by which the nominal interest rate is higher than the inflation rate.

In other words, if you are getting 5% interest from a T-bill and inflation is at 10%, the real rate of return for your money is negative 5%. You just lost money in terms of purchasing power.

It's the Real Interest Rate (RIR) that matters.

Get it? I told you it was simple.

The problem is right now, the yield you get from a 10-year Treasury is 1.58% — essentially nothing, considering the time frame. And the rate is certainly less than zero when you factor in inflation.

The government is reporting through the Consumer Price Index that inflation is now running at 2.2%. Some people think it's a lot higher than that. Certainly the price of turkeys and stuffing has gone up...

But even taking the government at its word, the real interest rate is negative.

People are right now giving the government money for a decade knowing they won't be able to buy as much in 2022 as they can now. It's absurd! You might as well spend it now — go to Vegas or hire Van Halen to play at your birthday party.

The smart investor can only conclude that until the bond market has a positive rate of return, there is no reason to own bonds.

And these same investors know that owning gold during times of negative bond returns can be extremely profitable.

The opposite is also true: When real interest rates are positive, like they were from 1982 to 2000, gold sold off in an unrelenting bear market.

As we have determined, the long-term gold market is determined by real interest rates.

So, where do they go next?

Ben Bernanke at the Federal Reserve has said it will keep rates low and print $45 billion a month until the labor market improves or the economy gets going. This has been called QEfinity, as it came after other stimulus programs Q1, Q2, Q3.

The Fed has stated it will keep buying bonds to keep rates low “at least until mid-2015.”

Furthermore, say for some strange reason the economy does get going again, and all that printed money starts to get spent...

Inflation will hit with a vengeance.

This will force the Fed to raise rates.

But it does not change the facts for real interest rates.

The Fed always hikes rates too slowly for fear of stepping on the brakes. This is what caused the booming gold market in the 1970s.

If you want to own the best investment for the next two years and still sleep at night, buy gold and keep your eyes on the secret gold signal, the RIR.

If you see 10-year Treasuries start to move higher than 2.2% (or the current CPI), start paying attention...

Until then, buy the dips and ride the waves.

And as always, thank you for your readership. I wouldn't be here without you.