The Road to Ruin is Paved with Gold: Buy Monsanto (NYSE: MON) 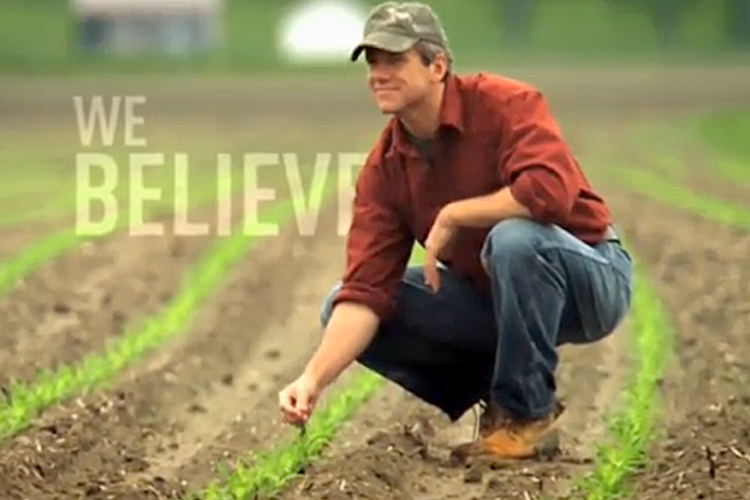 I have a love and hate relationship with GMOs.

On one hand I LOVE inventions of things like seedless oranges and watermelons. I'm still waiting on an avocado shrub I could grow in a bay window, though (wink wink) I know it's coming!

On the flip side, I hate some of the health risks associated with spraying Agent Orange on all of our food... or the practice of strong-arming farmers into unbreakable contracts and eradicating heirloom vegetables.

Love, hate. It's a constant struggle. So I try hard to ignore it.

In fact, I try really hard to live in denial.

You were born that way Cookie Crisp! I know it!

Now, I can't tell what is worse, the bad publicity Monsanto (NYSE: MON) gets – we all know GMOs and pesticides are NOT natural and potentially potentially harmful – or how it insists on shoving its foot so deep in its mouth that it's popping out the other end.

A few days ago, the W.H.O. released a report that suggested glyphosate, which is an ingredient in Monsanto's Roundup Ready cocktail, “probably causes cancer.”

This wasn't the decision of one guy.

There were seventeen impartial scientists from around the world involved. They were all studying the same compound. And their vote was unanimous. IT PROBABLY CAUSES CANCER.

If seventeen auto mechanics looked at my car and said, “it'll start but once you put it in gear and get on the highway, your brakes won't work at all”, I'd think twice before getting on 95 in rush hour.

This decision puts glyphosate on the W.H.O.'s list with other known dangers. Things like cigarettes... asbestos... and working the late shift at a 24-7 Zips.

Am I surprised by this new label? Um, no.

It was initially put on it back in the '80s, after studies first revealed that “IT PROBABLY CAUSES CANCER.”

After all, the product was first introduced in the Vietnam War under the name Agent Orange. A chemical compound that is still directly tied to many birth defects in the nation.

But my point isn't whether or not Roundup is a cancer causing substance. Hell, I had no idea that it was off the list – or that they kept a special list – in the first place.

And really, with my diet, I'm too deep, too all-in, to really do anything about it now.

I know life isn't a confessional where you say you're sorry, change your ways and are forgiven. If it's going to get me, it's already in the system.

So screw it. Enjoy the ride.

My point is this could have been swept under the rug if Monsanto did absolutely nothing. If it only ignored the paper, we wouldn't be any wiser.

I mean, I don't read the latest W.H.O. reports. They don't show up with my Arbutus Times or Wall Street Journal in the morning. I don't make looking for the newest boring scientific paper a part of my morning routine.

And odds are that you don't either, unless it's your job.

So all they had to do was ignore the W.H.O.'s report.

But could they?! Of course not.

Sweets, you couldn't ignore me if you tried

On march 26th, news broke that Monsanto was fighting the W.H.O for a retraction of its unanimous decision. They want their compound – something that can kill everything (plant and critter alike), except for seeds genetically modified to withstand it – to be listed as “safe”.

Predictable as an episode of Jerry Springer, that announcement sparked a flood of articles from all corners of the globe. The NY Times, Fortune, Yahoo!, even a text from my mother giving a heads up that Roundup is probably not the safest thing for me.

And it didn't stop there.

An ecologist that claims toxins are okay for soil, plant life and human consumption. An environmentalist that loves nuclear power and denies even the possibility of man-made climate change. And if you pay him enough, anything else you want him to pretend to be (insert R Kelly joke here).

He's about as reputable as Dr. Nick on the Simpsons.

And in this case, he conveniently appeared on camera for a French documentary as an expert ecologist, touting the safety of Monsanto's Roundup.

In fact, he was so bold as to say, “You can drink a whole quart of it and it won't hurt you”... on camera! The clip is right here.

Fortunately, while filming, they just so happened to have a glass of the stuff on-set! What are the odds?!

“People try to commit suicide with it” and “I'm not an idiot” I believe were his retorts when the interviewer asked if he would like to drink some on camera.

Bluff called. Good try Monsanto. Looks like it's back to the drawing board.

Public Relations. An animal. A cute, lovable one. Hmm...

Monsanto is now officially in the business of giving back to the environment (that it so willingly destroyed). The company is donating a “whopping” $4 million to save the Monarch Butterfly.

… a butterfly we all grew up with... a butterfly that has seen it's population reduced by more than 90% in the past two decades, thanks in some part to Monsanto's Roundup.

They just don't get it.

But that really doesn't matter to the CEO or board of directors. They're proudly sitting at the top of the world... of the 4th most hated company in America, according to Bloomberg.

And while the company's share price has been slipping since late February (although bouncing back strongly yesterday), it's only temporary.

In the same press statements where management announced its battles with the W.H.O and its fight to save the butterfly, it also announced its intention to double earnings per share by 2019.

So if there is anything to be learned, you can rage against the machine, but you can never destroy it.

So invest (or don't invest) accordingly, either with your values or your greed. But one thing's for certain – even though the company's most valuable product probably causes cancer, the road to ruin is paved with gold. And if your ethics will allow it, Monsanto will likely make you a lot of money along the way.