The Power of Media: A Libertarian Perspective

Powerlessness and Punditry: The Empathy Gap Between Audience and Media 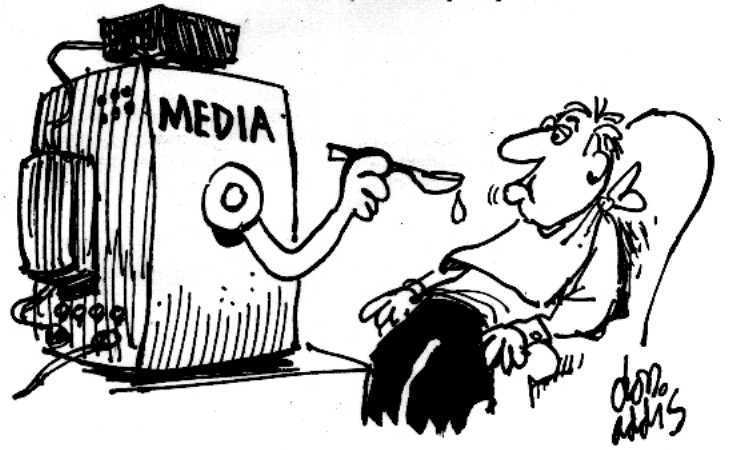 Complaints around “ethics in journalism” from aggrieved #GamerGate participants recently reminded me of my days as a conservative railing against the injustices of the “liberal media.” Of course I’m still not sure what sending death threats to female game developers has to do with ethics in journalism. But what all these things have in common, I believe, is a pervasive and near-universal feeling of powerlessness.

That’s exactly how I felt. I was on the outside of “the media,” looking in. I felt helpless as media giants distorted or ignored facts that were important to me. It seemed like journalism was a giant cabal of liberal types cloistered in their coastal cities. They were a rich, well-educated elite, every day enacting an agenda to screw me, an everyday American just trying to make it in what they call “flyover country.”

These people who would never give me the time of day and probably would look disdainfully at me, my life, and my most deeply held beliefs held in their hands the ability to set the national conversation around events. They decided what was important enough to talk about. They decided what I and everyone else would know about what was happening. In my mind, people voted based on what they chose to talk about. People spent their money based on what they thought about things. People leaned liberal and voted liberal because the bozos on television and in the newspapers, in subtle and less-subtle ways, told them to.

A few things have happened in the interim. First, not to overstate, but the Internet democratized media. It’s hard to even remember that at one time, not long ago, there were in most cities at most two or three newspapers. Which meant maybe 60 journalists and five or ten columnists telling the biggest cities’ readers what to think, know, and care about.

Between then and now blogging and mircoblogging displaced newspapers as the default source of news for the average American. Every single American now has easy, free access to news and opinion from literally millions of sources. What that means, among other things, is that each and every reporter, blogger, and pundit is now less powerful than they once were, because the increase in sheer numbers has diluted their potency.

The second thing that happened is that I, in a very, very small way, joined the ranks of “the media” I once thought so powerful. I’ve been published in some very mainstream publications, and even appeared on television. It’s weird to think about, but literally hundreds of thousands of people have seen my face or read my words at this point.

And what I’ve learned from this is basically: Everyone feels powerless.

Once I started getting published, the first thing I started to realize was that no one was keeping libertarians out of mainstream publications. The Internet unleashed unheard-of levels of competition amongst news and opinion sources. That means nearly all editors are under immense pressure to deliver stories people want to read. Libertarians by and large don’t get published, not because gatekeepers are repulsed by a small-government message, but because our writing generally sucks and we usually write about topics no one cares about. There’s no conspiracy. If libertarians write quality stories on newsworthy topics they’ll get published just like anyone else.

The next thing I realized after I started getting published is that I didn’t even begin to matter. When I’d write something, two things would happen. People would write me telling me how much they appreciated me saying something they already agreed with. And other people would write to me to let me know that they hoped someone would rape me because I’m an ugly, stupid (badword) who is also, by the way, a terrible writer. There were a few people whose views budged or hardened as a result of my words. But I was not, for the most part, changing hearts and minds.

My ideas about a powerful media began to seem silly. I began to realize that people read and listen to people who say what the audience already thinks and feels, but in a slightly more eloquent way and with new reasons to justify their beliefs. And people will read and listen to people who really, really piss them off. People don’t want to restrict immigration because Ann Coulter tells them to. Ann Coulter spews xenophobia because there’s an audience who is also xenophobic and an audience who enjoys feeling righteous indignation about xenophobia.

So in a weird way, I empathize with both sides. I get the gamers who are like, dude! Stop reporting in a biased, incorrect way about something I care deeply about. Of course my empathy for them is curtailed by the fact that they are incensed about anti-bigotry and misogyny biases. And by the fact that they’re still using a hashtag thoroughly and correctly associated with rape and death threats.

But I also get the journalists who are like, “Lol that you think there’s a conspiracy afoot, I’m just trying to get paid very little to work long hours in an incredibly competitive industry, plus you’re gross for reacting with blatant and violent misogyny because you’re upset about games.”

And the empathy gap yawns. The truth is that whether it’s politics or games, the audience sets the agenda. You, dear reader, with a million options in front of you, set it with every channel flick and website click. Pundits and journalists like me are just shouting into the void of cyberspace waiting for someone to choose to hear our voices.