Six weeks was all it took for the palladium market to get spooked into a panic.

When a major mining strike in South Africa shut down all palladium production in the country on January 23rd, the clock started ticking on the palladium price, with analysts expecting a sharp rise in value if the strike wasn’t resolved quickly.

Well, it wasn’t resolved quickly, and six weeks later on March 4th, the inevitable happened... palladium punched through its upper resistance of $760 an ounce held in place throughout the previous 12 months. It has kept right on climbing ever since, rising to a multi-year high of $860 yesterday for a jump of 15% since the strike began, with plenty more upside expected.

“We believe the market is working under a structural production/consumption deficit,” chief precious metals analyst at HSBC, James Steel, revealed. “We are therefore bullish medium to longer term.”

Just what is behind palladium’s “structural production/consumption deficit”? Will this be enough to set palladium apart from the other precious metals that have been stuck in the mud for over two years?

Three successive punches have knocked the global supply of palladium to the floor, lifting its price to the sky.

At the same time, the political upheaval in eastern Europe caused by Russia’s annexation of Ukraine’s province of Crimea in March and the economic sanctions it has triggered have interfered with Russian palladium exports. Equaling South Africa’s production of 82 tons of palladium in 2013, Russia’s contribution of 40% of the global palladium supply has been disrupted to an as yet undisclosed degree. 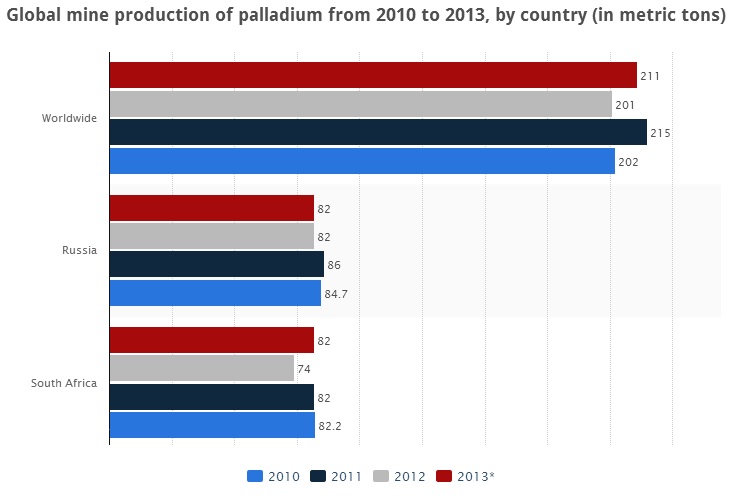 Finally, a third source of palladium has been trickling lower for years and is suspected to have finally stopped completely: the palladium stockpile held by the central bank of Russia.

“There has been considerable speculation about the current holdings of the Russian government’s palladium stockpile,” informs one of North America’s largest palladium producers, North American Palladium Ltd. “While this [amount] remains a state secret, credible forecasters have recently indicated the state stockpile has declined to relatively low levels and will no longer be a significant contributor to the palladium market going forward. This has resulted in a substantial deficit.”

At a precious metals conference in New York last December, a representative of Russia’s largest palladium producer Norilsk Nickel informed delegates that the Russian finance ministry used to deliver as much as 2 million ounces of palladium onto the market annually. Yet the amount has been rapidly declining, falling to 1 million ounces in 2010 and to a mere 100,000 ounces suspected throughout 2013.

“In the last couple of years, the stream has become really thin,” noted Norilsk market strategist Anton Berlin at the conference. “We view this as a very good indication that the [central bank] stockpile is depleted. And we don’t expect Russian government sales will have any influence on the market this year or in any following year.”

At the same time as palladium’s supply keeps shrinking, its demand keeps rising. In part, the metal’s good electrical conductivity and high melting point make it valuable in electronic circuitry. And of course, there is its use in jewelry, housewares, and dentistry.

Yet its greatest use by far is in automobiles. Its unique catalytic properties — high level of resistance to corrosion, high melting point, strength, and durability — make it the metal of choice for use in catalytic converters for removing carbon particles from engine exhaust, accounting for 67% of the metal’s demand. 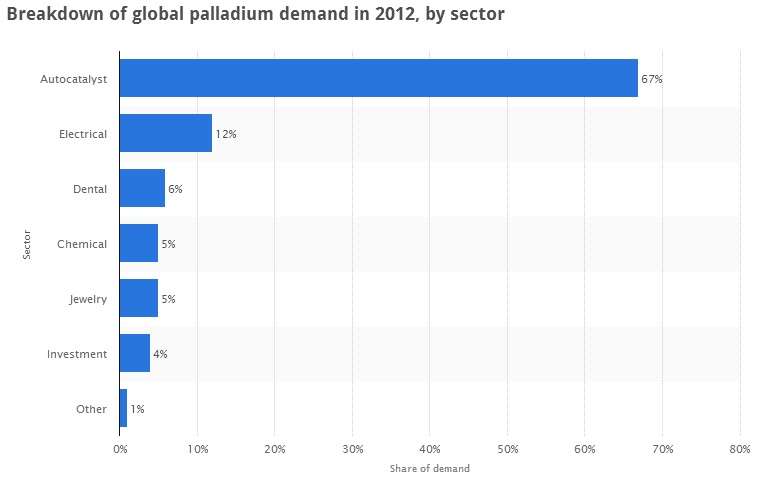 With automobile purchases on the rise in China and India, together with those nations’ increasingly stringent pollution controls, palladium’s use by the global auto industry is expected to grow year after year for the foreseeable future.

“Palladium is currently trading at the highest levels since 2001 and is projected to remain strong through 2017 as the supply deficit is expected to persist,” informs North American Palladium. “The outlook for palladium over the next ten years predicts a return to historically high prices, strong fabrication and investment demand, and constrained supply.”

No Relief in Sight

“The crisis is starting to look desperate as more players wake up to the fact that existing stockpiles could be depleted very quickly should no agreement be reached going into” the third quarter of this year, he assessed.
Even when operations resume, palladium mining in South Africa is wrought with challenges from “deeper mines, power and water limitations, higher operating costs, geopolitical risks, shortage of skilled labour, and the strengthening of currencies,” NAP informs. “There do not appear to be any near-term solutions in place... These problems are expected to continue to affect PGM miners, and coupled with rising mining cash costs, will likely limit palladium supply from South Africa.”

What of the other palladium producing regions? Well, that’s precisely the problem. Apart from Russia and South Africa, there are no other viable palladium-producing regions of any significance.

“As a rare precious metal,” NAP expounds, “there are very few palladium producing regions worldwide and few known economically viable ore bodies. Russia and South Africa, which account for almost 80% of global mine palladium production are known to be higher-risk jurisdictions.”

As such, even if prices across the rest of the precious metals complex remain suppressed as some predict, there is ample reason to expect palladium to buck the trend and spiral upward on its own. Indications are its recent surge in price is only the beginning.