The ONE Thing Pelosi and Trump Agree On

If you watch the news or participate on Twitter or just exist inside the United States, it’s probably no surprise when I say that Donald Trump and Nancy Pelosi don’t quite see eye to eye. You might even call that an understatement. They really seem to despise one another.

So, it might come as a surprise that Pelosi just threw her support 100% behind Donald Trump and his administration. But last Friday in Germany, that’s exactly what she did. 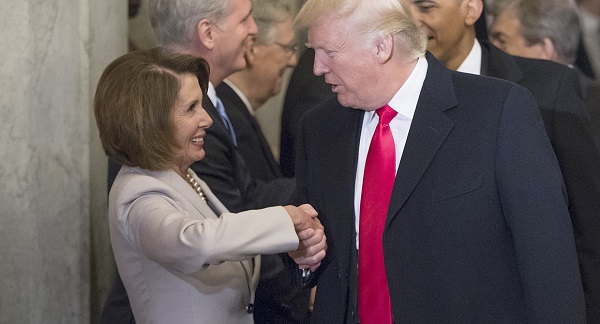 Speaking With the One Voice

At the international Munich Security Conference last week, Nancy Pelosi was working the crowd both behind the scenes and in front of cameras, trying to draw support for the Trump administration's plans to get the U.S. to the top of the 5G race.

Two weeks ago, the British government decided to let Chinese tech firm Huawei build parts of its network despite the evidence that the Chinese government can and will force Huawei to use its equipment for espionage.

And both Trump and Pelosi have been on the war wagon ever since. The president has chosen a slightly more abrasive route. He and his administration are using pressure tactics like warnings that nations adopting Huawei equipment will risk their relationships with the U.S. intelligence community.

Speaker Pelosi’s tactic has been to appeal more to the values and morals of our European allies:

Nations cannot cede telecommunications infrastructure to China for financial expediency… Such an ill-conceived concession will only embolden [Chinese President Xi Jinping] as he undermines democratic values, human rights, economic independence and national security… We must invest in other viable options that will take us into the future while preserving our values…

She added that she and the president have an agreement in that regard and that there was nothing partisan about this issue. Both Pelosi and Trump want Western leaders to build a network that is about freedom, not oppression.

Just a Matter of Months

With such strong bipartisan support from two of the country’s most powerful (and outspoken) political leaders, the White House’s accelerated schedule to build a viable competitor to Huawei sounds extremely plausible.

Robert Blair, the White House’s lead for international telecommunications policy, said that both he and the president agree that “we have to work together to ensure that our 5G technology evolves in a way that supports the underlying values and principles which we have brought all of our countries together over the years.”

According to Mr. Blair, the president, his administration officials, and the House speaker want to make sure that whatever 5G becomes and wherever it exists, it ensures the freedoms we hold dear and “not the ability to censor messages which any government does not feel is supportive of their overall ideology… [and] the ability to track dissidents within a country or outside of a country.”

He added that it will be a U.S. effort with “like-minded partners from around the world… and it’s a matter of months, not years.”

And one of the potential plans to accelerate that rollout to a couple of months is investing directly in Huawei’s competitors — Nokia and Ericsson.

It’s an odd idea to most Americans. The only time the government usually invests in a business is when it’s about to fail and needs a bailout to survive. But that’s not the case with Nokia or Ericsson.

Granted, both companies are behind Huawei when it comes to 5G networking technology. But neither is on its deathbed, praying for a handout. They just need some extra oomph to get their R&D back up to speed and take the top spot from the potentially nefarious Chinese firm.

And the Trump administration thinks an infusion of gubmint money is just the ticket. Two weeks ago, U.S. Attorney General William Barr said that our country should take a controlling stake in both companies to halt Huawei’s “drive to domination.”

But it’s not Nokia or Ericsson’s stock that’s going up because of all this talk. In fact, after Blair said that the U.S. wasn’t going to take those controlling stakes, but instead work towards a “partnership with industry,” one small stock shot up 35% the past week alone. And it’s still heading higher (up another 15% when I typed this).

But there’s so much more to go. This stock was trading at around $8. Now it’s up close to $12. But by the end of the year — maybe even earlier if Trump and Pelosi get their way — it could be as high as $68 a share.

That’s over 500% upside. And that’s just the beginning…

You see, while the wireless carriers are battling to get 5G networks up and technology companies are racing to develop the new standards the network will run on, one small company has been scooping up the ONE asset 5G must have in order to work.

It doesn’t make the new antennas. It doesn’t offer wireless coverage or sell mobile devices. But it’s critical to the successful deployment of 5G. This one company owns the backbone the entire network needs to be built on.

And it’s already getting support from all of the wireless carriers AND the federal government to get its network operational for 5G wireless.

And now that there’s bipartisan support from two of America’s biggest political personalities, it’s getting a lot of attention from investors as well.

In the first 11 trading days of February, its share price is up nearly 70%. And with every day, more investors start to pay attention to this diamond in the rough. That’s just keeping prices headed up as more people flood the company with cash.

The stock may already be close to doubling, but there’s so much more room for it to run. Now that it’s got a strong wind behind it, we’re getting into what I like to call “the profit cycle.” 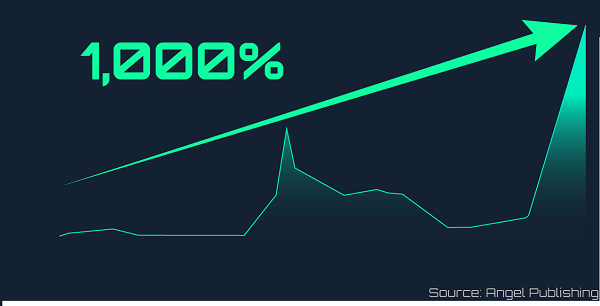 For a long time, the stock price was stuck in a rut. Investors weren’t interested in it, and analysts weren’t paying any attention to it. But then news struck that the worlds’ elite are betting on the infrastructure that 5G will be build on, and shares started to move.

That got analysts interested, and they started writing to their investors about the company. More money started coming into the stock. Then, last week, a federal judge's decision to accelerate the 5G rollout brought more attention to the infrastructure it would need. Shares kept on rising.

Now, with Pelosi and Trump both behind it, the shares are tearing higher. It’s a cycle: stock goes up, stock gets attention, attention brings investors, investors drive the price up, and the stock gets more attention and even more investors. We’re right at the start of that as you read this. And there’s easily potential for you to capture another 500%+ gain this year alone.

My partner and I put together a presentation that outlines the entire opportunity, from the massive profits about to roll in thanks to 5G to the reason this company will dominate the new market.

You’ll get all the information you need to understand just why the prospective gains are so massive and why we’re beating our desks demanding our investors get themselves positions.

Or, if you prefer to read more about this life-changing opportunity, you can view a written report with all the same information by clicking here.

No Prize for Second Place

And all you’ll have to do to invest is spend a little time over the weekend and you could be set up to retire this year, buy that dream vacation house this summer, or just sit back and count your fortune over a glass of Dom Pérignon.

But don’t take any longer than that to get the information and get invested. There's no prize for second place in this contest. When a stock jumps 15% in a day, it gets a lot more attention; and thanks to the profit cycle, that attention leads to much higher prices.

By the time the market opens on Monday, we could be looking at another double-digit price increase, which means your potential profits will be that much smaller in the end.

So, click here now. Check out our presentation. Get all the details. And get invested today.

Then you’ll be set to sit back and watch your 5G profits come rolling in while you plan how to spend your newfound riches.