The Next Step for the Hydrogen Fuel Cell

You've been hearing about it for years. In fact, I bet you can't remember a time when this little-understood technology wasn't being talked about.

It goes back further than you think.

Hydrogen fuel cells were the primary power source for NASA's legendary Apollo moon missions more than half a century ago.

That's a small but very telling indicator of just how reliable the technology is. Sadly, 50-some years later, we've yet to see any mass adoption of the power source for the consumer market.

The reason is simple: Hydrogen isn't cheap to produce, store, or transport.

Because hydrogen requires investments of energy to be distilled from water, further investments of energy and manpower to be injected under extreme pressure into steel cylinders, and more still to get it to where it's going, the automotive industry has been scoffing at the idea that the heir apparent in the energy race — the lithium-ion battery — has anything to worry about.

Unless, of course, somebody, somewhere came up with a way to make that hydrogen onboard the very vehicle that it's powering. If that were to happen, then the cumbersome, inefficient chain of events that gets the wheels of a hydrogen fuel cell vehicle to turn would be virtually eliminated.

A solution like that sounds perfect, but on a practical level, has been more akin to the Mr. Fusion upgrade on the back of Doc Brown's time-traveling DeLorean after he comes back from 2015 at the end of the first installment of Back to the Future.

It was too good to be true; and the promise of onboard, on-demand, limitless hydrogen still is. But today, one Danish company has a stop-gap solution that may just prove sufficient to make the fuel cell car an economic contender.

The idea, currently under development at Aalborg-based Blue World Technologies, is to create hydrogen from methanol — a relatively simple procedure, though not without some carbon dioxide byproducts. 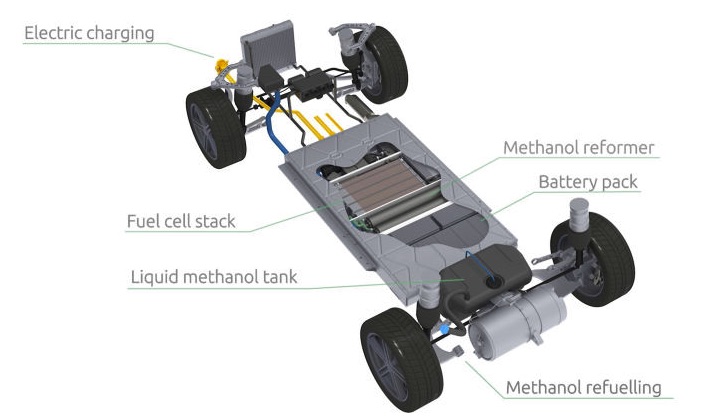 Methanol can be easily and sustainably created from such sources as landfills and can be stored at room temperature in an unpressurized container.

In the vehicles of the future, it would be carried in fuel tanks just like gasoline is today. Only instead of feeding the combustion chambers of an engine, the methanol interacts with high-pressure steam.

The resulting hydrogen is then processed by the fuel cell to create electricity.

A Work in Progress

No, it's not the ideal expression of what was envisioned as an elegant, clean technology, but bear in mind that the only electric vehicles on the road that can claim total carbon neutrality are those whose batteries are recharged exclusively using renewable power sources.

So if you have enough solar cells on your roof to power your house and keep your Tesla charged, you've got your own wind turbine in your backyard, or pay the premium for solar or wind-powered electricity, then you're still adding to the problem.

With "reformed methanol fuel cells," at least we come one step closer to achieving a truly energy-independent, carbon-neutral, and most importantly, mass-marketable alternative to today's automotive industry mainstays.

Right now, California electric vehicle maker Karma is working together with Blue World Technologies to develop just such a vehicle.

The plan is to have a test model finished by the end of this year and begin trials in the U.S. and Denmark.

Of course, prototyping the product isn't the only hurdle — perhaps an even bigger piece of the puzzle will be the development of infrastructure necessary to maintain the prospective flow of methanol.

The point, however, is clear.

Hydrogen fuel cell technology is being closely examined, worked on, and experimented with, and sooner or later (probably sooner than you think and with less fanfare than you might expect), hydrogen-powered electrical vehicles will become commonplace on today's roads.

Right now, as the major car brands face off on the battle lines of a new market, lithium remains the focus of attention.

And that makes it the popular investment.

One look at Tesla (NASDAQ: TSLA) stock over the last year paints that picture quite clearly.

And that makes something else just as clear: The smart money has already moved on.

Future-minded investors aren't interested in the market battles being waged now. They're looking to the battles of tomorrow.

As one of these future-minded investors, Jimmy Mengel has been following the hydrogen fuel cell story for a while now.

He's done more than your average analyst. He's studied the market. He's seen the technology with his own eyes. He's traveled across the country to sit behind the wheel and drive a vehicle powered by it.

The research he's compiled leads to some pretty interesting conclusions.

It may even change your mind about where you think the car industry will be in the next 10 years, 20 years, even 50 years.