China Will Overtake the World as #1 Gold Holder

If you think the recent, highly-publicized gold-buying mania is merely the result of a handful of panicking investors, urged along by a couple contrarian billionaire types... think again.

Today, it's no longer just private individuals buying up the yellow metal.

For the first time in decades, gold has become a nearly universal investment strategy... something that literally any class of investor must own to be considered well-hedged.

It's so important, in fact, that the world's biggest and fastest growing national economies are in the midst of an historic push to build up their stores of the precious metal.

Most of it will end up in places like this: 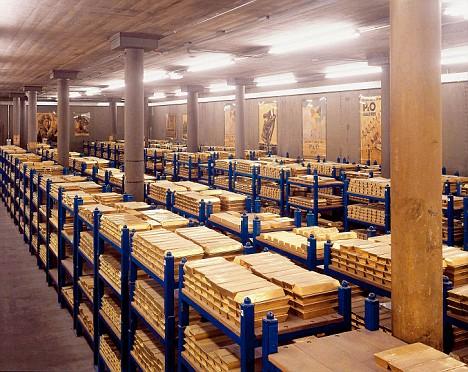 Not since the late 1980s has investment demand for this metal been as high as it is today.

In fact it has been 22 years since central bank and investment buying of the yellow metal outstripped industrial and ornamental demand.

Today, the biggest buyers of gold aren't private citizens or hedge-funds. Instead, nations like China, India, and Russia have moved forward to grab up every loose ounce of the metal...

If this trend continues, it will almost certainly reshuffle the world order as far as government-owned gold holdings go.

Currently, the United States occupies the number one spot with 8,133 tons of gold. However, if China's acquisition plans come to fruition, they will supplant the U.S. for the first time in history. 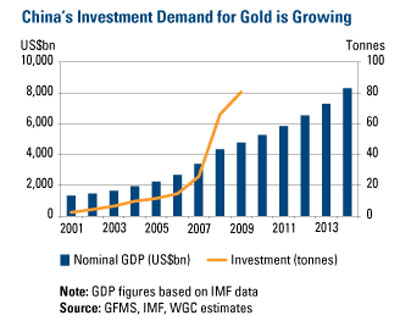 Similarly, India and Russia are working overtime to do the same to Germany and France — Europe's number one and two biggest gold owners.

While these facts may be shocking to people used to living in a world where Fort Knox was the single biggest concentration of gold in existence, the reasoning behind these developments is as clear as day...

Although this milestone wasn't a surprise (and in itself didn't symbolize any actual additional dilution of the dollar's value), it was the next and perhaps the biggest in a series of confidence-destroying events for the world's embattled reserve currency.

Far-sighted private citizens have been hedging against this for years, and, as we've seen from the price growth of the last 18-24 months, have been driving up the prices.

But it's the entry of cash-rich nations such as the big three I've been mentioning that promises to put gold into a period of change unseen before at any point in history.

The scary fact is these nations — as powerful as they're becoming, thanks to exploding industrial and natural resource wealth — are in the exact same boat as private citizens such as yourself.

Despite their growing influence and power, they are still subject to a global economic system which evaluates performance and transacts its business using the greenback... which makes their reason to hedge the same as your reason to hedge.

And the result of this unprecedented bull market is exactly what you see today.

Unfortunately, this trend isn't something that's going to screech to a halt based on one report from Jim Cramer or a well-placed article in The New York Times...

What we're seeing now is no longer manic buying or group think.

Today's gold market is the result of a calculated, determined, and ongoing campaign by the world's fastest growing economies to ensure their survival in the years and decades to come.

A couple years ago, I would have advocated buying gold to balance out a portfolio.

Today — with the gold rush on its way to becoming a permanent financial strategy for banks and cash-rich nations alike — I'm insisting on it as a tool of survival.