The Metal People are Dying For

Maybe the weak are simply being weeded from the gene pool so the strong may survive...

This theory might help explain why people keep electrocuting themselves to death, cutting into live power lines to extract copper.

Stories of deaths related to copper thefts have been all over the news:

I could go on, but I think you get the point.

I guess these people aren't bright enough to know that rather than risk electrocution, it's easier to rob someone's house and take out the copper pipes... break into a sewage treatment plant for 16 spools of copper...

Break into churches and steal heating and air conditioning units... steal chicken wire... or even break into a power company substation...

All of these instances have been reported since 2006, thanks to increase in both copper demand and people's desperation to make a buck.

Sad thing is these thefts will continue, as the price of copper is on track to spike even higher.

The already bullish outlook for copper is still being strengthened by several things:

Copper demand is likely to overtake supply this year by close to 455,000 tons, according to Barclays Capital.

But we believe copper will pull back slightly following its historic run north... And only on pullbacks would we suggest buying more.

And there's a much easier way to profit

(Rather than dying for it, I mean.)

It's not bubbling out of control; demand is very real and supply is short.

Even Goldman Sachs says copper has the "greatest upside" — thanks to weak inventory and strong demand delivery "driven by emerging market urbanization, and a constrained supply outlook."

Still, I wouldn't back up the truck on copper just yet. Pullbacks are likely as profit takers come in.

Plus, what if China comes in and buys less copper cathode and increases their buying of scrap... or cuts back on purchases?

While we believe copper prices could fetch as much as $11,000 over the year, it's better to buy on pullbacks.

Nothing ever goes up in a straight line... 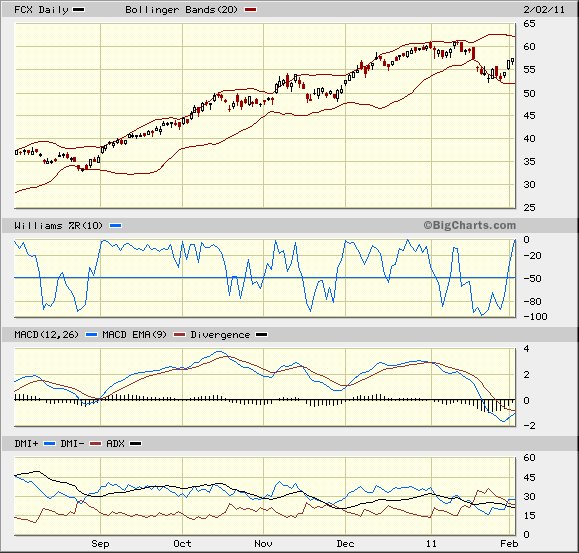 On pullbacks, buy stocks like FCX (which just split 2:1).

While the bulls seem to be in a buying mood, according to MACD and DMI reads, Williams % Range (W%R) is putting in an extremely oversold read.