The Future of Manufacturing

One Billionaire Bets Big on Next Global Manufacturing Hub

The butcher just laughed and asked, “What are you going to do with all this meat? You got a ‘big date’ or something?”

Your editor just bought six pounds of top-shelf rib eye ($28 a pound) and was headed to a barbecue where we would grind up ultra-high-quality steaks and turn them into hamburgers.

Who could be so wasteful? you wonder. Quite frankly, people with plenty of money — who are making more of it.

You see, the barbecue was being held in the one of most exclusive neighborhoods in Vancouver, British Columbia. The oceanfront views of the mansion we were at will set you back at least $20 million in today’s market. The crowd, as you might expect, included some of the leading industrialists in the world engaged in everything from manufacturing to mining.

Once the wine started to flow, one billionaire attendee revealed his latest investment idea...

And though it made no sense to anyone else there, it’s already starting to pay off big.

The reasons he made the move are going to benefit you greatly in the next few years and months. Here’s why.

The World’s Next Manufacturing Hot Spot

After regaling those of us who are still building our fortunes on the intricate details of why a Bugatti Veyron ($2.4 million) is a far better car than the McLaren F1 ($970,000), he revealed the one region he sees big opportunity in... the one he is cutting a multi-million-dollar check to take part in.

This particular investor saw an opportunity most of the financial world would have (or already has) written off: Fort Payne, Alabama.

The sleepy southern town of Fort Payne was once known as "the sock capital of the world." A century ago, it had a population of about 12,000. More than two-thirds of its residents worked in the hosiery industry, and the town produced more than half the socks in the country. If you wore socks, chances are they were made in Fort Payne.

Today, it’s a much different story. Total hosiery industry workers have fallen from a peak of 8,000 to a mere 600. Nearly 100 sock factories sit idle.

But despite the bleak outlook for a factory town with a dwindling number of factories, one billionaire sees opportunity here.

Fort Payne offers a few advantages China and other countries do not.

The major one is location. Nearly eight million autos were produced in the United States last year. A steadily increasing portion of them are made in the non-unionized South; Toyota, Mercedes, BMW, and others have built a number of factories there in the last few years.

The other advantage is quality. This is critical. China just can’t compete with Western nations when it comes to quality.

The way it was explained to me by someone with far more experience in international manufacturing is this: Chinese factories will always try to cut every corner they can. In the case of plastic vehicle parts, they will cut back on the costly resins, replace them with cheaper filler, and a much larger percentage will be 5 or 10 millimeters too small or too large and, therefore, completely unusable.

And this instance is just part of a much larger trend.

The President's Council of Advisors on Science and Technology recently reported: "We cannot remain the world's engine of innovation without manufacturing activity. The Nation's historic leadership in manufacturing, however, is at risk.”

Well, it would be — if it weren't completely wrong.

Either they’re angling for their protectionist policies, just morons, or some combination thereof, because the data tells a much different story. Let me explain...

The trend has only accelerated in the last decade. More than eight million manufacturing jobs have been lost over the past ten years, and they’re not coming back.

But manufacturing output has increased while jobs have been shed.

The image below from the Cato Institute tracks manufacturing output since 1959: 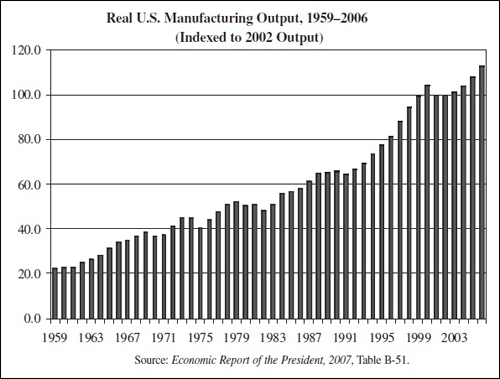 As you can see, the data reveals a much different story.

U.S. manufacturing output has increased more than five times since the late 1950s. (And that’s after factoring in inflation.) And how does the United States stack up against the other major manufacturing countries? In short, pretty well.

The U.S. is also far better than other manufacturing heavyweights. The remaining top 10 manufacturing countries — including Germany, Italy, France, Russia, the United Kingdom, Brazil, and Canada — only produce $4,400 in manufactured goods per capita.

U.S. manufacturing is anything but dead. But that doesn’t mean it won’t feel like it...

Let the Data Be Your Guide

Mark J. Perry of the University of Michigan best summed up the overall feeling for U.S. manufacturing when he said, “The average American factory worker today is responsible for more than $180,000 of annual output, triple the $60,000 in 1972.”

The number of manufacturing workers has declined steadily, but output per worker has more than offset the job losses.

Perhaps the loudest complaints about the "death" of American manufacturing come from union workers. But it’s more likely they have priced themselves out of the labor market than anything else; they also seem to find a much better scapegoat in China than in their own union leaders.

Finally, the U.S. doesn’t make many consumer goods anymore. You just don’t see “Made in the U.S.A.” on many products. And that’s because we’re buying socks, TVs, and microwaves that were made in China.

But if you needed a nuclear reactor or diesel engine — two manufactured products that are highly value-added and require stringent quality standards — chances are it's made right here at home.

Getting Fooled by Facts

As usual, reality turns out to be much different than the popular, widely-accepted and repeated crisis du jour.

Today it's manufacturing jobs. Tomorrow it may be state budget deficits, unfunded pensions, European debt, or anything else on a list that seems to only get longer and longer.

At every turn, however, there will be danger — and opportunity. Those able to acquire and deploy facts instead of the popular story, regardless of how widely-accepted it has become, will be able to seize the real opportunities as they come down the pike.

After all, while everyone is complaining about regulation and other issues affecting U.S. manufacturing (don’t get me wrong, they’re an extreme burden; it’s just that most other countries have it far worse), there are some really smart people who recognize these opportunities.

And if you want to drive a multi-million dollar car, live in an 8-figure waterfront mansion, or just be financially free to do whatever you want, whenever you want to, and not worry too much about paying your bills...

The facts — and only the facts — will help you get there.