The Fourth Amendment is Now Optional

It came out a couple of weeks ago: the executive summary of a report issued by the Department of Homeland Security (DHS) called, "Civil Rights/Civil Liberties Impact Assessment: Border Searches of Electronic Devices."

Basically, the DHS was charged with the responsibility of determining whether or not its policy of seizing laptops and cell phones from travelers is a violation of both civil and constitutional rights.

Any moderately-educated American could answer that question quite simply — but no, we had to spend a few more tax dollars for the government to figure that one out. And you'll never guess what the DHS concluded...

According to the new gatekeepers of our liberty, the Department of Homeland Security's search policy does not violate both the First and Fourth Amendments.

That's right. These guys believe that allowing government agents to search the contents of your laptop, cell phone, and other electronic devices — without reasonable suspicion of any wrongdoing — is both completely acceptable and legal. 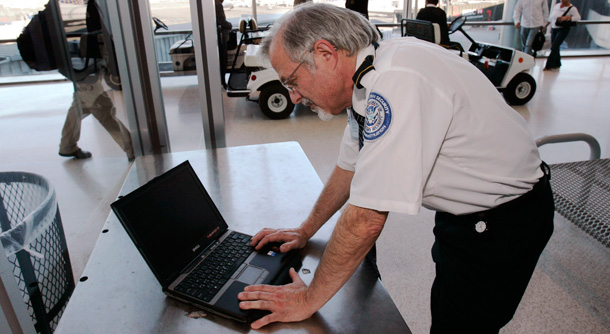 According to attorney Katie Haas, for more than four years now it has been the official policy of the DHS that Immigration & Customs Enforcement and Customs & Border Protection (the two agencies that monitor the border), can look at information on citizens' laptops, cell phones, hard drives, and other devices, and sometimes keep the information or share it with others — even when there is no suspicion that the device contains evidence of wrongdoing.

Haas writes that the DHS has essentially adopted a policy of peering into anyone's data, at any time, for any reason.

And through a Freedom of Information Act (FOIA) request filed back in 2010, it has been discovered that between October 2008 and June 2010, about 3,000 U.S. citizens traveling to and from the United States have had their electronic devices searched at the border.

That particular FOIA request also found that between July 2008 and June 2009, border agents transferred data found on travelers' electronic devices to other federal agencies over 280 times.

Look, I understand we have to protect our borders... but it cannot be at the expense of law-abiding citizens.

To accept such a thing is to accept incompetence and laziness. My friends, those are two qualities that continue to degrade our democracy, not strengthen it.

And the unfortunate truth is that harassment of U.S. citizens crossing the border is nothing new. In fact, just last year two Americans documenting pollution concerns and human rights violations were interrogated by border agents while their photos were destroyed.

One of the men, Ray Askins, was told by more than one agent that they would smash his camera if he didn't delete the photos; the other, Christian Ramirez, was threatened by one Immigration and Customs Enforcement agent, who told him: “Give me one reason to take you down.”(This was after Ramirez had already crossed the border back into the United States.)

One of the lawyers defending these two U.S. citizens, M. Andrew Woodmansee, released this statement:

Americans have a right to chronicle the activities of law enforcement. The Department of Justice recently stated that the right of a citizen to gather information about government officials — including photographs — serves a cardinal First Amendment interest in protecting and promoting the free discussion of governmental affairs. While the government has an interest in guaranteeing the security of the United States, it should have no role in stifling speech or violating our right to be secure in our person and our papers.

Although border agents can still unconstitutionally search your electronic devices at the moment, there are some steps you can take to protect your privacy...

After all, as the Electronic Frontier Foundation points out, there are any number of reasons why folks would want to protect their data.

Whatever the reason may be, there are a number of things you can do to protect your privacy at the border.

The good folks over at the Electronic Frontier Foundation have published a free report called, “Defending Privacy at the U.S. Border: A Guide for Travelers Carrying Digital Devices.” You can access that report here.