The End of Gold's 40-Year Exile

Of all the things Ben Bernanke has said to gloss over the current debt/money-printing/QE-fiasco situation, one little sound bite from three months ago really irks me.

During his monetary policy meeting in July, Ron Paul asked Bernanke if gold was money.

As a long-time professor and as a former chair of the Princeton economics department, he knows that's a crooked answer.

The fact is gold has always been held in the same regard as currency...

The only time throughout the entirety of history that gold was not considered synonymous with cash is the last 41 years — and that was because the U.S. government exiled it.

But now central banks, international financiers, and the world's wealthiest people are quietly moving their wealth back into gold, the same way they always have, by trading their dollars in for safe haven precious metals...

Let's back up a bit and talk about why gold was exiled in the first place...

The Bretton Woods system had been in place since July 1944 to tie currencies to the U.S. dollar and provide stability among economies and currencies worldwide.

John Maynard Keynes' original proposal involved a supranational currency called the bancor that would be used as the linchpin...

The United States objected, and thus the dollar has since been the world's reserve currency.

To maintain some semblance of faith in the system, the USD would maintain the ability to convert to gold at $35 per ounce.

For two and a half decades, the system worked fairly well, all things considered, but it didn't last...

U.S. involvement in the Vietnam War ran a balance-of-payments deficit and a trade deficit, the first in the 20th century. 1970 was a crucial turning point wherein foreign arbitrage of the U.S. dollar caused governmental gold coverage of the paper dollar to decline from 55% to 22%.

Nations grew increasingly worried about reckless economics in the U.S. and began cashing in dollars for gold...

Switzerland redeemed $50 million of paper for gold in July; France cashed out $191 million in the yellow metal.

Gold's exile from its position as universal money started on August 15, 1971.

The whole system came crashing down when Nixon and his advisers decided — without consulting the members of the international monetary system — the dollar-to-gold convertibility was done for. This policy removed any absolute value from currency strength.

The linchpin of the global currency system was still the USD  — but currencies were based on faith in promises from politicians and the economists they hire.

Gold was exiled from modern currencies because U.S. politicians wanted to rack up unsustainable debts and were tired of suffering the consequences.

The move bought us four decades of waning faith from investors who bet on the U.S. covering its debts.

Politicians still use central bankers to patch up the economy through currency manipulation, deficits, and trade imbalances that are driving national debt past sustainable levels.

Watching this all go down are the world's central banks, international financiers, and wealthiest individuals... and they're opting out.

Just as the Swiss and French did in 1970 as Uncle Sam outspent himself on war efforts in Vietnam, they are quietly converting their wealth from the greenback back to gold. 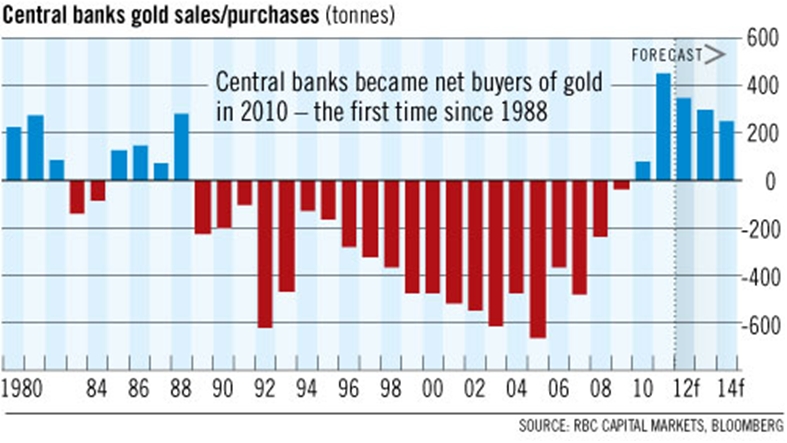 In the second quarter of 2012, central banks around the world scooped up 157.5 tons of gold, marking a 63% increase from the first quarter and a whopping 138% increase year over year.

And central banks aren't the only ones making the switch from paper to physical bullion, coins, and mining stocks...

As Dalio told CNBC in September: "I think gold should be a portion of every one's portfolio to some degree because it diversifies the portfolio. It is the alternative money."

Conversions between the USD and gold may not be officially sanctioned by the U.S. government, but they are still in place through the free market.

The Basel III rules will put gold back on par with cash and Treasury bonds as top-tier assets for bank reserves starting January 1, 2013.

Though Ben Bernanke may not be willing to say gold is money (because it would undermine his position), U.S. policymakers cannot hide the truth...

Gold is still used as money, it always has been, and it always will be.

It's ironic that the same reason politicians and policymakers exiled gold in the first place — unsustainable debt without immediate consequences — fueled its resurgence.

Mainstream media hasn't covered this return to the gold standard until the last few weeks.

This has given central banks and other investors a head start in securing gold before the rules go into effect come January 1.

Not to worry; our very own Christian DeHaemer has been among the first people to bring this story to light.

Christian's investing foresight, his research, and analysis are the reason his Crisis and Opportunity portfolio is up 33.46% this year...

And he has three gold stocks he says investors should get a position in now — before gold becomes cash again in just three months' time.

Learn more about the new banking rules and how to play them for 670% profits here.