The Dismal Truth about Hedge Funds

What we can learn from CALPERS 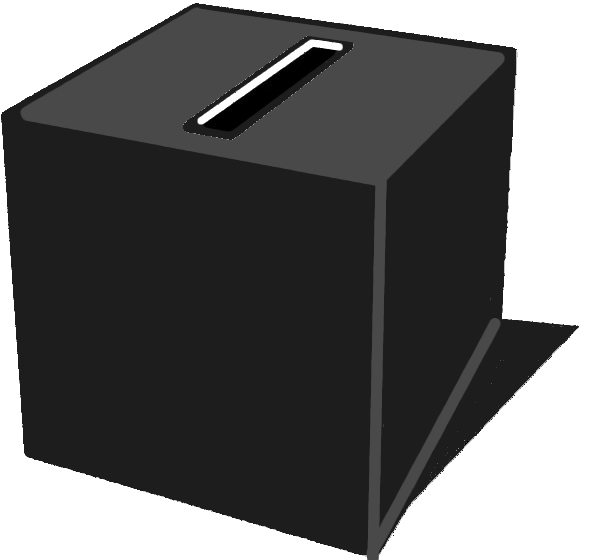 You and any other reasonable person would likely just laugh and walk away. But you’d be surprised at how many very intelligent business professionals are indeed investing in these little black boxes – such as some of the largest pension funds in the nation, including the largest one of them all, the California Public Employees’ Retirement System (CALPERS).

Those money-making little black boxes they invest in are hedge funds, loosely regulated and notoriously secretive.

Or more accurately, they used to invest in them.

CALPERS recently announced it was closing its book on hedge funds, the whole $4 billion portfolio, after earning just 7.1% in fiscal year ending June 2014 – as compared to their 18.4% returns elsewhere.
As the largest pension fund – worth some $298 billion, which would put it in 8th place on the Russell 3000 if it were a corporation – CALPERS’ move could set a new trend among other pension funds.

“I would expect their decision to divest from hedge funds will cause some public pension funds to re-evaluate their hedge fund strategy,” predicted Keith Brainard, research director of the National Association of State Retirement Administrators.

If you are invested in hedge funds or funds of hedge funds, should you re-evaluate your participation? Even if you do not invest in such funds but use a hedging system of your own, should the hedge fund industry’s poor performance over the years move you to reconsider your own hedging strategies?

The Long and Short of It

As complex as hedging systems are, the simple truth is that beating the market is hard, very hard – as data compiled by research firm Preqin Ltd shows in the graphic below. 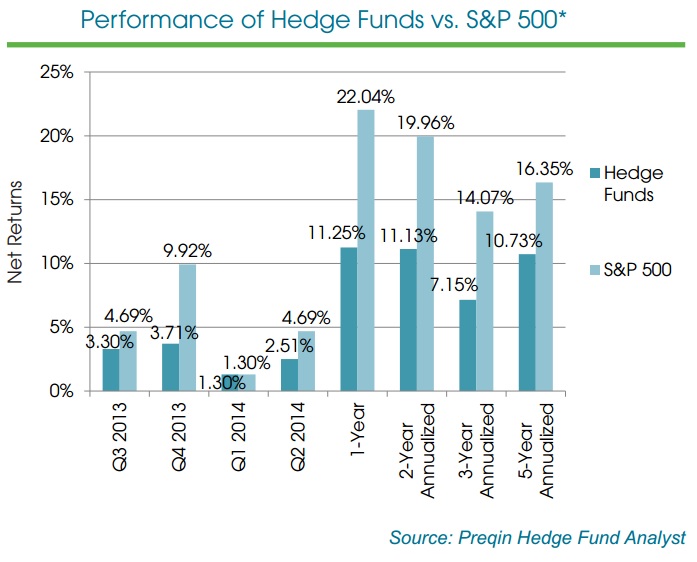 In CALPERS’ experience with hedge funds, their 10-year annualized returns averaged just 4.8% per year, whereas an investment in the SPDR S&P 500 ETF (NYSE: SPY) would have returned 80% in total, averaging 8% per year over the past 10.

Why do hedge funds perform so poorly? Because the whole point of the exercise is to invest some of the fund in an opposite moving vehicle. Whether the fund is a combination of long some stocks and short others, or whether it uses put options, or even concocts any other specialty mechanism - some part of the portfolio is always pointing in the opposition direction.

In addition to shorting stocks, fund managers can also use put options or inverse ETFs to generate profit on a downside move. Many will also use futures to increase leverage and amplify the moves.

These hedging strategies work fine in a choppy market that is continually reversing direction, since you are constantly shifting profits from one side to the other and back again. But they fail miserably when the market takes off in one direction and just keeps going – as it has been for over 5 years now since the spring of 2009.

Data compiled by Bloomberg Businessweek below shows precisely what the advantages and disadvantages of hedge funds are. 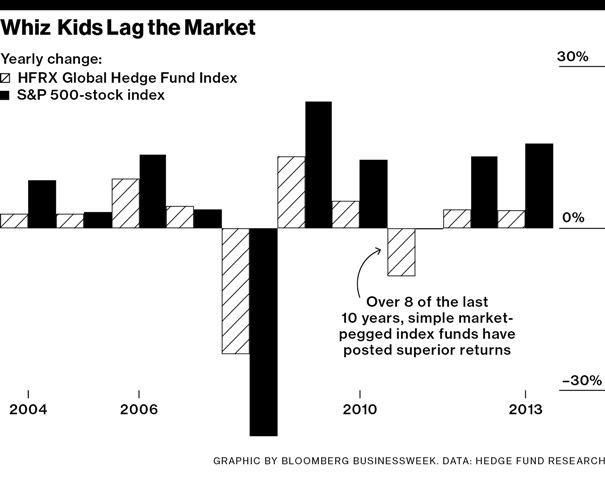 Do you notice when is the only time that hedge funds outperform the overall market? During a major correction, as in 2008 when hedge funds lost less than the market did. But that’s it. In the bull market run since then, nothing. No advantage.

While a hedge is a protection during market corrections, the rest of the time – which is most of the time – hedges are liabilities. The portion devoted to the opposite direction becomes a dead weight slowing the fund down.

And not just by a little, either. But by a great deal, as depicted in the graph below comparing the HFR Equity Hedge Index (blue) to the S&P 500 Index (red) since the close of 2010.

As a result, hedge funds have been closing shop at a greater rate post-financial crisis than before it, as noted by the Wall Street Journal below. 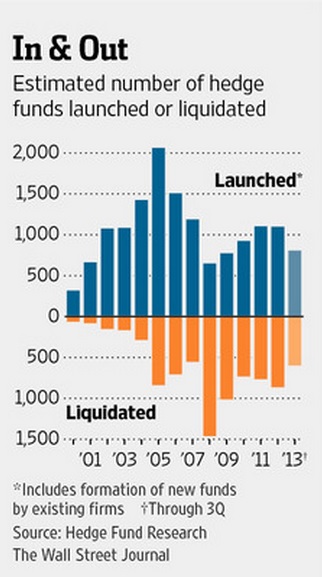 Hedge funds were all the rage in the opening years of the new millennium. Markets were choppy, and there was money to be made on both sides of the market if you were able to wait for the tide to turn.

But as time dragged on and as volatility was drastically reduced by steady low interest rates after the 2008-09 crisis, hedge funds simply couldn’t keep up with the rising market, forcing old funds to shut down almost at an equal rate to new ones opening up.

After all the data is in and performances are evaluated, what is the conclusion? Hedge funds are not sustainable long-term.

Hedge funds are highly specialized to reduce losses during corrections. But this protection comes at the cost of reduced profits during bull runs. Since the amount of time a market spends in corrections is far shorter than the time its spends moving up, it would be folly to sacrifice years of upside just to reduce the impact of a few months of downside.

This is just the first risk you are taking with hedge funds – the loss of upside potential. Yet in addition to this risk, there are two others, one of them being their secrecy.

If you’re not allowed to look inside their little black boxes, you’re exposing yourself to unknown risks. Now isn’t that just the biggest irony? Hedge funds are supposed to help you reduce and mitigate risk, and yet their very nature actually adds to your risk.

Put money into a hedge fund and you won’t know where that money is being invested. That’s not a hedge against risk. That’s a taking-on of additional risk. Even worse, it’s a risk you can’t mitigate because you don’t even know where in the market that risk is located.

To add insult to injury, not only are hedge funds adding to your risk, but they are charging you elevated fees to boot. It’s like being punched in the belly and then paying the man who hit you.

“Given the contracts are secret, how do you know they are not overcharging you on fees?” Tobe questions. This is your third risk, as all those fees are taken directly out of your returns, as CALPERS openly admits.

How much does the SPY broader market ETF charge in fees? 0.1102% - just slightly more than one-tenth of one percent. And the expense is actually reimbursed to you through its dividend, which currently sits at some 1.87% annually.

And no, this isn’t a simple case of “hindsight is 20/20”. The abysmal record of hedge funds has been known for years.

“This is a really critical period in the investment world where pension funds have a chance to demonstrate a little responsibility,” Frederick E. Rowe Jr., vice chairman of the Employees Retirement System of Texas and general partner at Greenbrier Partners, expressed his hope for a return to sounder investment planning. “We should be paying less and getting more for our retirees. CALPERS is teeing it up for everybody.”

Perhaps we can learn a thing or two from CALPERS’ experience with hedge funds, and from its recent decision to withdraw from them. A simple long-only strategy will always outperform a long/short or other hedged strategy.

And you can set one up yourself through an ETF with a minimal expense ratio that is often less than the dividend paid.

Luckily, there is still ample time remaining in the current bull market to unhedge our portfolios to keep better pace with the market on its next leg up. Remember that although corrections are deep, they last a relatively short time compared to bull runs. It simply isn’t worth it to sacrifice so much upside gain for a little extra downside profit which is available only for a short time.

Let the hedge funds keep their little black boxes. If you keep your leverage under control (you don’t even need leverage in a long-term bull), and if you buy a little on every dip, you can outperform the hedge funds all by yourself.