These People Are Taking Control of Major Cities

With oil running on futures backwardation, slight signs of growth, and falling supplies...

I decided to take a trip to the one spot taking center stage: North Dakota's Bakken region.

Little did I know how hard it'd be to book a hotel room.

Most area lodging is at 100% occupancy for months to come as strippers flock to this part of the country... and need a place to call home for a few nights.

Things are so good in this American hot spot that strippers from as far away as New Jersey are relocating here to do business. After all, the thousands of men coming to Williston, North Dakota, need something to throw their new $125,000 paychecks at.

One of the women tells CNN she makes about the same "amount she would have made in an entire week in Vegas." Another was quoted as saying, “We make more than doctors.”

But who am I to complain about a sudden massive increase in the adult entertainment industry?

When was the last time you heard someone complain about sustainable growth?

It's a typical Saturday night at the local pizza joint in Williston. Tables groan under the weight of wings, pizza, and pitchers of beer. Children run around between chairs and hide under tables with new friends.

A high-strung waiter, flapping his gums faster than my jet-lagged brain can handle, tells me it's been like this every night for months.

"I've never made so much money," he admits with a grin as he sets my beer down on the table in front of me.

There's a new way of life for the people of Williston. People are flocking to the town from all over the country, escaping recession-hit towns and salaries that pale in comparison to those the citizens of North Dakota currently boast.

“See that girl over there?” the waiter asks me, tilting his head toward a woman across the restaurant.

“She's a stripper from Atlantic City. Moved here about two months ago, making something like $3,000 a night.”

“That woman over there,” the waiter continues, “is a truck driver out of New York. She moved here last year with three kids under five and that lazy husband of hers. She tells me she just about doubled the income she was making in New York."

“That guy over there?" he gestures with an elbow. "He just moved here from Florida with a wife and two kids. He tripled his salary. He works six days a week, but he tells me it's better than before.”

I nod along. “How do you know so much about these people?” I ask.

“I live with them," he shrugs as he delivers my pizza.

Turns out my chatty waiter and about 20 other families camp out every night in their cars, either in a local parking lot or nearby camp grounds.

“It's all because of the big oil boom around here. There are jobs, jobs, and more jobs to be had. There's no recession here... There just aren't enough homes to house us all right now. I've been sleeping at the campgrounds since I moved here."

There's no fear of a recession in this area. The pay is outrageous. Housing can't keep up with demand.

Unemployment is the lowest in the country; companies are hiring non-stop.

And while the rest of the country struggles to keep the recession at bay, North Dakota has a $1 billion budget surplus as other states face $4 trillion of debt.

The growth is astonishing.

So long as new drilling technology allows for more oil finds in this part of the country, North Dakota's "behemoth" Bakken will continue to boom... 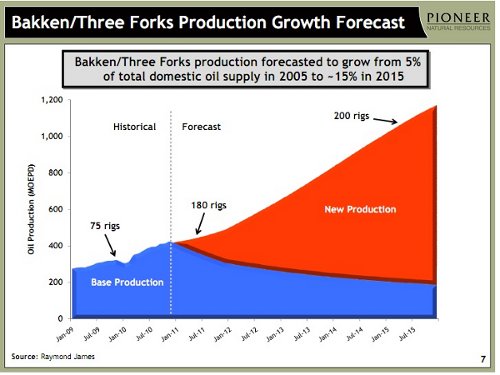 None of this comes as a real surprise to us. We've known about this boom for years.

In fact, Keith Kohl of The $20 Trillion Report has been pounding the table over the Bakken for years. He was one of the first to recommend companies like Brigham Exploration (NASDAQ: BEXP) around $3 — and a few years later, sell it at $36. 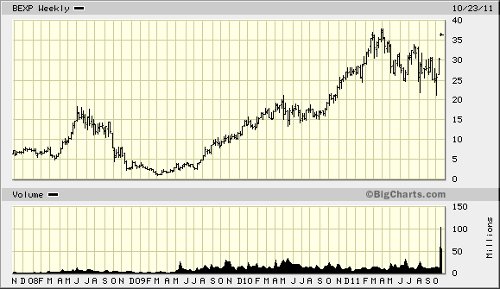 Statoil (NYSE: STO) announced it would buy BEXP for $4.4 billion — or $36 per share — giving STO one of the strongest, most solid positions in the Bakken region. This buyout wasn't news to us...

Nor were we surprised by Hess' (NYSE: HES) move to acquire American Oil & Gas for close to $8 share, or Northern Oil & Gas' (AMEX: NOG) quick ascent to $34 a share.

Yet there are companies whose properties are being valued at less than half of what Brigham's property was bought for as they await a buyout.

The Saudi Arabia of America

A few years ago, the U.S. Geological Survey said the Bakken held between four and five billion barrels of oil.

But according to Harold Hamm, founder and CEO of Continental Resources (NYSE: CLR), that's not possible.

“We estimate that the entire field, fully developed, in Bakken is 24 billion barrels,” Hamm told the Wall Street Journal. That alone would easily double our proven oil reserves.

And this growth will continue for quite some time...

But what's really exciting about North Dakota is that it's about to overtake California — and maybe even Alaska — to become one of the United States' biggest oil producers.

If it does, the money that could be made by average investors is staggering.

Why wouldn't you invest in the Bakken?

We've been doing it for years, pulling down massive profits for readers. Keith's latest play could easily do the same.

And right now, he's putting the finishing touches on a new report that tells you all about it.